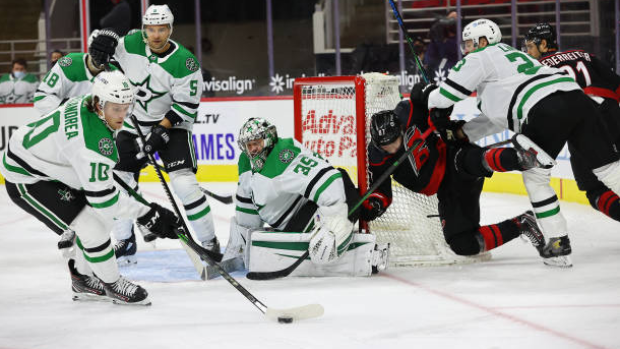 One of the uncomfortable realities of playing a professional sports season during a global pandemic – even amidst optimism surrounding a worldwide vaccination effort – is that nothing can be set in stone.

Last season, the National Hockey League led from the front by instituting a two-city bubble format that kept players and support staff safe while maintaining the integrity of the league’s restart plan. The bubble format worked exceptionally well – positive coronavirus tests were few and far between, and the games went off (mostly) without a hitch.

This season has been different. Save for the San Jose Sharks, all teams are playing their games at home and adhering to a relatively normal travel schedule after divisional realignment.

The league has instituted significant controls to try and minimize the risk of virus spread within teams (including punitive actions for teams who violate COVID-19 protocols), but they have also accepted the reality that positive tests will occur over the course of the season.  With that comes another reality: teams are going to have to be quite flexible in order to get through the year.

Early into the season, the league was dealt a few difficult hands. An early outbreak within the Dallas Stars facility saw multiple games postponed, subsequently impacting the Florida Panthers. More recently, the Carolina Hurricanes (impacting multiple teams) and Vegas Golden Knights (impacting the St. Louis Blues and Sharks) have experienced outbreaks of their own, and have had to temporarily shut down facilities.

There are two issues here. The first is that the schedule is already compressed. If this season went perfectly to plan, teams would on average play a game every other day (2.0 days per game), already compressed by about 10 per cent relative to a “normal” season.

The second is that each team outbreak has a multiplier effect – the Panthers, for example, have already lost four games this season due to two different opponent outbreaks in three weeks.

How have teams been impacted, and what does it mean for the rest of the league schedule? Here is the math on the scheduling changes so far: 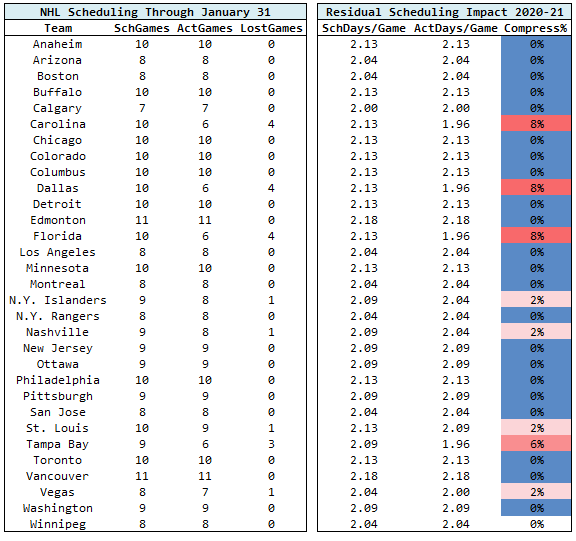 The key point here is that a number of teams have already seen unprecedented schedule compression because of the truncated schedule and because of postponements of games due to outbreaks.

With 84 per cent of the regular season remaining, six teams (including the Sharks and Golden Knights, who will see game cancellations next week) already have a remaining schedule where they will play more frequently than every other day. Add the COVID-19 scheduling compression to the shortened season compression, and you can see how the games will stack up for teams down the stretch.

One other thing to remember: If the league is set on finishing the regular season on or around May 8, 2021 (in order to maintain scheduling discipline in preparation for both the Olympics and an expectedly “normal” 2021-22 regular season), the compression can only increase with time.

Right now, the league can remain hopeful and steadfast in a belief that all teams will finish a 56-game season. A couple handfuls of postponements are manageable. But if the math of the early season schedule changes holds and outbreaks continue into February and March, the league may have a very tough time getting all teams to completion.

Should that be the case, you would figure that the league might rotate to something like points percentage to determine postseason teams.

The league has done a good job so far managing through an impossible situation, but it’s important to be realistic about where we sit. A repeat of January in February and March is going to create some serious scheduling chaos towards the end of the year, and will bring to the forefront questions on the feasibility of finishing the season with all 868 scheduled games played.