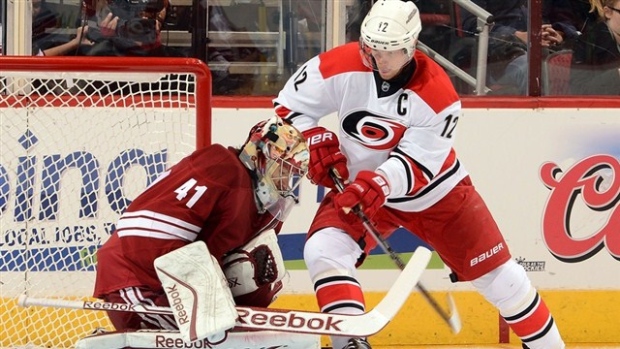 There has been trade speculation about Carolina Hurricanes center Eric Staal recently – and even though he has a no-move control, it’s impossible to resist considering the possibilities.

The organization appears headed towards a full-fledged rebuild, and Eric Staal – whose $8.2-million AAV contract expires at the end of the 2015-2016 season – is an asset that could be shopped to potential suitors.

If Staal’s ever made available, expect numerous playoff-hopeful teams to show interest. A lot of this is because Staal has been durable for most of his career and has been a regular point-producer for as long as he’s come into his first-line, twenty-minute-a-night role. He’s averaged about 2.1 points per 60 minutes over the last seven years at five-on-five, which is in the upper echelon of forward talent.

Like most players inching toward their 30’s – he actually turns 30 Oct. 29 - Staal’s underlying numbers have been in decline. It’s the type of trend less concerning if you’re buying Staal as a true rental at some point this season, but far more concerning if you are considering negotiating a new contract.

Let’s focus on basic numbers at 5-on-5 for Staal since the 2007-2008 season to capture where things have slowed. In the table below, you’ll find his per 60 scoring rates and shot-attempt rates. So, for example, in the 2007-2008 year, Eric Staal scored 2.1 points and attempted 17.2 shots for every 60-minutes played at even-strength.

The year-to-year, downward trending shot-attempt rate is alarming. Further, consider this: from 2007-2010, only six forwards in the league generated more shot-attempts per 60 than Eric Staal. From 2010-2014, 75 forwards have been better in the shot generation department. Only Alex Ovechkin, who still ranks first in the league over that span, has experienced a bigger decline in the individual shot-share.

The point-scoring hasn’t caved yet, but it’s interesting to note that his high-scoring 2012-2013 was created almost entirely by unsustainable on-ice shooting percentage. That year, Eric Staal and his linemates – primarily Jiri Tlusty and Alexander Semin - shot a ridiculous 12.8% at 5-on-5, masking his individual shot generation numbers. One wonders where the point-scoring will go in a year where the percentages slide unfavorably, particularly since the shot generation has started to slide.

The RelativeCorsi% has held up for the most part, but the last two years make you wonder. The acquisition of Jordan Staal in Carolina has really given the coaching staff the luxury of deploying Eric Staal in big, offense-heavy minutes, but raw point-scoring aside, Staal’s 2012-2013 season wasn’t impressive – the Carolina Hurricanes were actually 4.2% better in Corsi% with Eric Staal off of the ice.

These poor possession numbers in 2012-2013 were followed by extremely high offensive zone start numbers (+16.8%) in 2013-2014, which does raise the question of whether or not the coaching staff identified a problem and felt the need to insulate Eric Staal’s line. Is there something to the radical change in deployment, or are the last two years simply noise? If I’m a front office considering trading for and extending a player like Staal, it’s precisely the kind of question I need to find an answer to prior to making a move.

There’s one other metric I like to glance at when it comes to pinning down whether players are losing a step via aging, and that’s penalty differentials. It makes intuitive sense that players who aren’t as fleet of foot will see a spike in penalties taken, and a drop in penalties drawn.

The early years of Staal’s career saw him drawing penalties like a maniac and basically never being shuffled to the penalty box. Put six years of mileage or so on Eric Staal’s body, and the story has flipped. He doesn’t draw virtually anything these days, and he’s committing penalties at nearly double the frequency.

I think there’s merit to conducting this sort of multi-level data evaluation to any player, but it’s infinitely important when you’re talking about trading likely multiple assets for a player nearing the end of his long-term contract. In the case of Staal, you’d like to think that the trading team would like to extend him, too.

In Staal’s case, I don’t think there’s any question he’s still an impact player. On the other hand, knowing what we know about the aging curve and the deterioration of players in their 30’s, there’s reason to be concerned about Staal before you even get into the declining shot rates and increased insulation and growing predilection for taking penalties.

Thus, teams looking to go for it may be right to pursue Staal as a hired gun at the trade deadline. Teams looking to improve long-term? There may be better options.