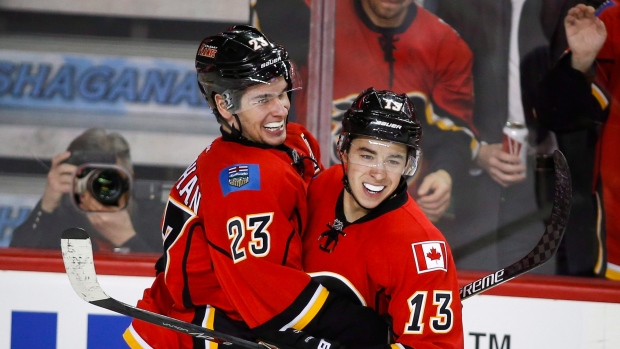 In preparation for the opening of training camp, TSN’s Salim Valji posed a number of intriguing questions for Calgary Flames fans on Twitter over the weekend. Chief among them: What will become of the Johnny Gaudreau and Sean Monahan pairing up front?

Valji’s inquiry about the duo is understandable. Having spent years together inside of the Calgary top six, the combination of Gaudreau and Monahan has been a staple of success. But the 2019-20 regular season came to a screeching halt for this unit, one that struggled to generate meaningful offence for the majority of the season.

If we look at how Gaudreau and Monahan have performed over the years, we can see they routinely translated territorial advantage into favourable goal differentials. Last season, that wasn’t the case. The Gaudreau and Monahan tandem saw a significant slide in their shot share, and correspondingly their production dried up.

It ended with Calgary’s prized scoring unit being outscored at even strength last season, an alarming sign for head coach Geoff Ward: 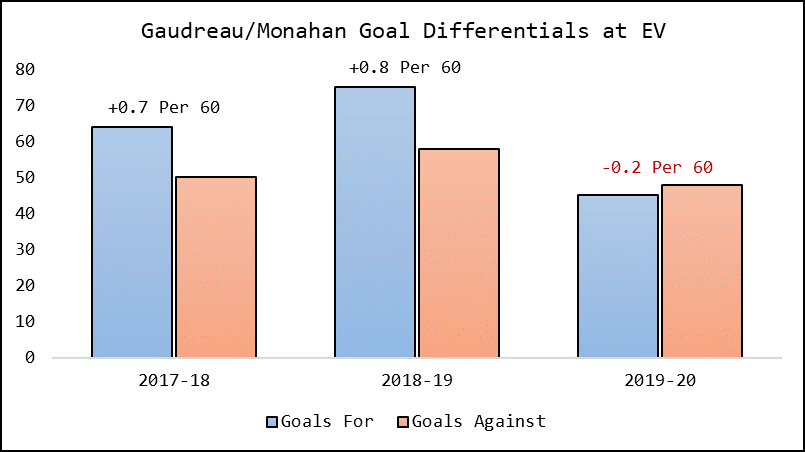 What’s curious about the performance deviation from Gaudreau and Monahan last season is that the most likely culprit – a change in teammates – doesn’t appear to be at play here.

If you compare the regular seasons of 2018 to 2019, for example, you see that the Calgary top line generally featured the same third forward (Elias Lindholm) and a rotating cast of top-four defencemen. In fact, it’s one of the most stable year-over-year deployments you can find in the league.

So, what caused Calgary’s top unit to struggle last season? I think the answer is multi-faceted, but two things stick out: they really didn’t have any puck luck (an element perhaps outside of their control), and they spent too many shifts in the neutral or defensive zone (an element very much in their control) relative to years past.

The loss in territorial advantage, combined with disadvantageous shooting percentages on both ends of the ice, meant a negative goal differential by year-end:

So yes, the Flames goaltending tandem was leaky and Calgary attackers went through some serious scoring slumps last season, the type of slumps you wouldn’t expect to sustain over longer periods of time. But the loss of puck dominance in 2019-20 is cause for concern.

One of the elements you know Ward has wrestled with this off-season is alternative lineup options. It’s one thing to diagnose that perhaps Gaudreau and Monahan have, for whatever reason, lost some degree of effectivity. It’s another to work up another solution with the resources at your disposal.

That’s particularly important for the Flames, an organization that spent most of its salary cap to square up the defensive side of the ice, their big signings including Chris Tanev on the blueline and Jacob Markstrom in net.

To that end, other combinations will need to be found internally. If we look at some of the common forward teammates that Gaudreau in particular has had over the past three seasons, we arrive at two conclusive points: Gaudreau appears to drive offence at every level, irrespective of what combination of players he’s playing with, whereas Monahan appears to be a bit more reliant on Gaudreau to deliver strong on-ice results:

You can certainly make a case that Gaudreau and Matthew Tkachuk – who has generally maintained the responsibility of driving the team’s second line – are a worthy bet together; two speedy and tenacious wingers who can elevate the play of their centremen. But moving Tkachuk up the lineup would mean moving Lindholm down the lineup, and it’s not clear to me that the net gain of such a move is worth it.

Moreover, if the underlying problem is more with Monahan than Gaudreau, it’s not clear another centre further down the lineup – say Mikael Backlund – would resolve the problem, particularly if some of the issue (some poor shooting luck) sorts itself out without any intervention.

Ultimately, I think Ward has to roll with Gaudreau and Monahan to start the upcoming season, if only to test whether last year’s performance together was more statistical aberration than growing trend. The coaching staff doesn’t have a player waiting in the wings to displace Monahan from his current role, and there is enough in the fleeting shooting and save percentages to believe they were luckless last season.

If I were a betting man, that change would mean Monahan moving down the lineup for a stretch.