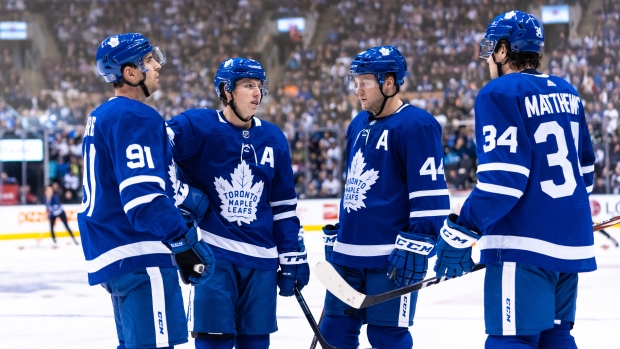 After a disappointing qualifying-round loss to the Columbus Blue Jackets last August, I wasn’t quite sure what to expect from the Toronto Maple Leafs’ front office this off-season.

On one hand, you have a very capable and talented roster that has qualified for four consecutive postseasons on a +100 goal differential. On the other hand, that roster has had four consecutive first-round exits.

Not every playoff loss has been the same in the Auston Matthews era, but there have been common themes. Defensive performance across the board, inconsistent goaltending and production from fringe players have been weak spots.

That is ultimately where general manager Kyle Dubas went to work. This off-season alone, the Maple Leafs brought in forwards Travis Boyd, Joe Thornton, Jimmy Vesey, Joey Anderson and Wayne Simmonds, along with defencemen T.J. Brodie and Zach Bogosian. The new faces will certainly bring a refresh of optimism for a franchise looking to get over the hump.

But it’s what Toronto didn’t do that probably is more interesting. Rather than making franchise-altering movies and disrupting their core (names like William Nylander and Mitch Marner are floated out as trade pieces after each postseason, it seems), the team again doubled down on its young stars and went to work at the fringes of the roster.

Such a strategy makes both hockey sense and economic sense. The Leafs organization is locked into most of their young skaters for some time, and although we now have a few years of disappointing playoff runs, it’s important to remember the team is working with a much longer runway.

Three of their four core players – Auston Matthews (23), Mitch Marner (23), and William Nylander (24) – are well on the right side of the aging curve, and most of the supporting cast is similarly young. The hidden benefit of building up a successful team at the very early stages of careers is that you get many more bites at the apple, and the Maple Leafs know this.

If we look at organizational production from last season by age and by team, we find that most of Toronto’s positive contributions come from the younger side of their roster – a good long-term sign when it comes to roster building.

To illustrate this, we will look at roster composition (the percentage of players on the left side of the aging curve; we will use 28 years of age as a cutoff, based on aging curve analyses), and then measure the contributions by age group using Evolving Hockey’s Goals Above Replacement measurement: 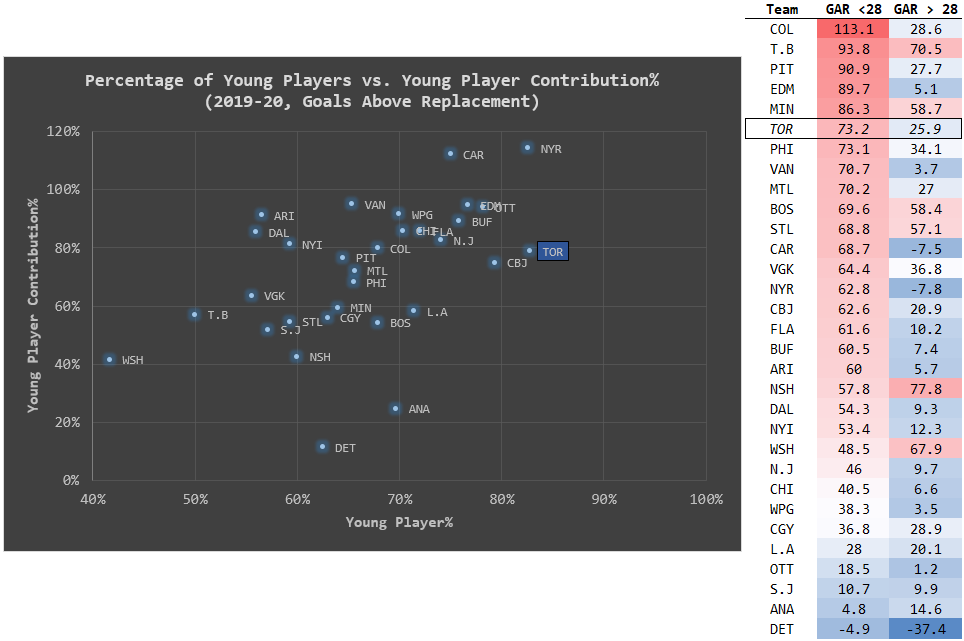 I like this visualization because it becomes very obvious which teams are more veteran-oriented, and which are youth-driven.

Look how skewed Washington’s roster is toward older players and the contributions of those older players, as an example; the same is true for other Stanley Cup contenders in Tampa Bay and Vegas. On the other side, you have the more obvious up-and-coming teams in the Maple Leafs, Columbus Blue Jackets and Edmonton Oilers. (I do like the two extreme examples of the Carolina Hurricanes and New York Rangers from last season; both of these teams actually received below replacement-level contribution from the older half of their roster, which put an additional burden on the younger cores of the respective rosters.)

One of the other interesting parts about the roster make-up of the Maple Leafs is that the team only really dressed five veteran players last year on a regular basis – 28-year-old John Tavares and 30-year-old Jake Muzzin were two of those five, both of whom are signed long-term and figure to be major factors in how Toronto’s next few seasons shake out.

The overarching point here is that for as frustrating as Toronto’s performance has been over the years, they have the luxury of time. This isn’t a roster under the gun to deliver a Stanley Cup in short order – time is on their side, thanks in large part to the fact that most of Toronto’s key pieces were drafted just a few seasons ago.

There still is tremendous pressure to win, make no mistake about that. But patience is a virtue. Having watched two mega-talented rosters in three seasons – the Washington Capitals in 2018 and the Tampa Bay Lightning in 2020 – win Stanley Cups after years of underwhelming playoff exits only solidifies the point that the best way to a title is by getting competitive and staying competitive for a long time.