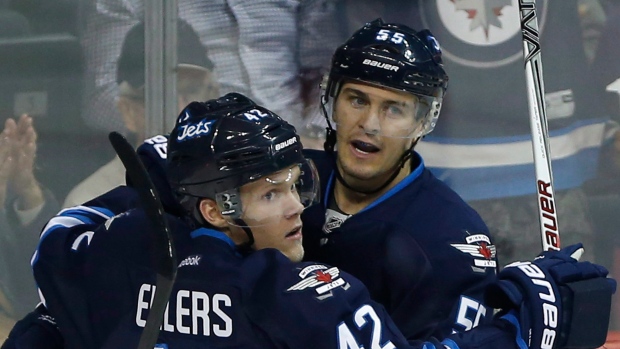 The Winnipeg Jets will start the season with a four-game road trip, heading east to play Boston, New Jersey, the Islanders and the Rangers. (All games on TSN3 and TSN 1290) Jets were a good road team last year finishing 20-13-8.

The Jets defence will be made up of familiar faces. When camp started nine blue-liners were on hand, and all nine played a key part in the Jets making the playoffs. And with new faces up front, Coach Paul Maurice will reply on the back end to be the team's strength, at least until the new faces get their feet wet. If the top six opening night are Tyler Myers and Toby Enstrom, Ben Chiarot and Dustin Byfuglien, Mark Stuart and Jacob Trouba, it would mean three of the six were not part of defence group to start last season. Chiarot started the year in the AHL and Myers was in Buffalo. Byfuglien started on the wing, but because of injuries moved back to defence on December 5, going 13-21-34 in 43 games played. Paul Postma, Adam Pardy and Jay Harrison were the remaining three. Carrying nine defencemen was not an option. So Harrison went on waivers to get the roster down to 24, 14 forwards, eight D and two goaltenders. So one more forward has to come off to get to 23, the maximum you can have on your roster.

The Jets will bring four and possibly five new faces to the group of 13 forwards. 20-year-old Nic Petan, 19-year-old Nikolaj Ehlers and 21-year-old Andrew Copp will start the season in the NHL. Alex Burmistrov (turns 24 later this month) is back from two years in the KHL and will start his fourth NHL season, while 29-year-old Thomas Raffl needs to be signed but may fulfill his life-long dream of playing the NHL. JC Lipon also had a very good training camp but will start the season with the Manitoba Moose. Right now  Maurice is not concerned about the number of youngsters starting the season in the NHL. "We've got enough strength around them – we've gotten younger by design," he said.

Maurice was planning on moving people around during camp to see where players fit best. But because of Andrew Ladd, Bryan Little, Adam Lowry, Mark Scheifele, Byfuglien, Myers and others missing games, that experiment did not happen. Then in the final pre- season game Perreault left early after a collision with Calgary's Lance Bouma. All were on the ice for Monday's practice.

So here is how the forwards stack up. Somehow the Ladd-Little-Wheeler line always gets re-united. It's partly because of the inability to mix and match through the pre-season, and partly because the Coach has liked some other combinations to the point where the offence should be spread around and the team would not rely totally on that line. Same goes for the defence that trio provided. Perreault-Scheifele-Ehlers, Burmistrov-Lowry-Stafford, Petan-Copp-Thorburn were the other lines at practice, with Raffl and Anthony Peluso the extra forwards. That final roster move has to be made on Tuesday. Coach likes his line combinations. "We've got them in roles they understand. We'll develop them in those roles. We have a good idea how we will match lines, both home and away." The feeling is the Scheifele line will contribute on the offensive side, the Lowry line can be used against the opponent's top line.

At the start of camp Maurice talked about needing more scoring, after the final pre-season game said "our game has changed a bit. We will move the puck differently." Some of that scoring will have to come from the fourth line. Lack of production from the fourth line has been an issue. Petan had terrific numbers in junior, while Copp's numbers in college were good.

Coach Maurice also talked about this possible scenario. If you are down a goal or tied, you will run your top players hard in the final five/six minutes. So having a player like Petan to play in the three-on-three overtime might work. He sees the ice very well. His assist totals from junior will verify that.

Maurice was very careful about using the term "made the team". With the AHL team back in Winnipeg moving young players up and down is very much a reality, more so than a possibility.