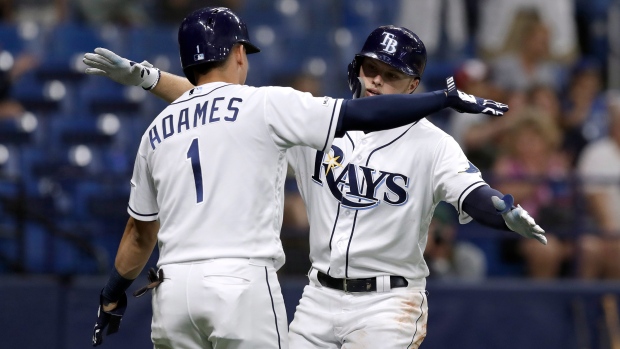 ST. PETERSBURG, Fla. — The Tampa Bay Rays are confident they can emerge from a tough five-week stretch and remain in contention for their first playoff berth in six years.

With help from a surprising 14-4 start that left the New York Yankees and Boston Red Sox playing catch-up in the AL East for much of the season's first half, the low-payroll Rays reached the All-Star break with 52 wins despite a 17-19 record since the beginning of June.

An eight-game, seven-day trip that starts Friday at Baltimore could impact what the mostly young team does to try to bolster its roster before the July 31 trade deadline.

"We've had some tough times here as of late, but we've put ourselves in a tremendous position to come out of the break and compete," manager Kevin Cash said.

"I hope our guys recognize that," Cash added. "The game is not easy, our division is not easy, the American League is not easy, and we have done a lot of good things to put ourselves in the position we're in right now."

The second-place Rays, who trail the Yankees by 6 1/2 games, led the AL East through play on June 14.

Since then, Tampa Bay is 10-12 — compared to New York going 16-4 over the same stretch — to retain a slender edge over Cleveland, Oakland, Boston and Texas in the race for the top AL wild-card spot.

At 52-39, the Rays have the fourth-best record in franchise history through the All-Star break.

"We know our division is going to become even more challenging. The Yankees have done their thing with injuries, we've done our thing with some injuries. I don't think the Red Sox have actually gotten hot yet and taken off, and they're totally capable of doing that," Cash said.

"It's easy to sit and think about what's taken place the last three weeks and it hasn't been our best baseball. We've been beat up a little bit," the manager added. "But if you look at it as a whole and you've put yourself in the position that we have, you've got to be pleased."

In addition to seeking help for a pitching rotation led by All-Star Charlie Morton (10-2, 2.32 ERA) and reigning AL Cy Young Award winner Blake Snell (5-7, 4.70), the front office figures to also be in the market for a hitter and to bolster an inconsistent bullpen.

The Rays, led offensively by young All-Stars Brandon Lowe and Austin Meadows, are counting on improvement from within the current roster, as well.

Lowe is batting .276 with a team-leading 16 home runs — tied for most by a Tampa Bay rookie before the All-Star break — and 49 RBIs. Meadows has cooled following a torrid start, but still is hitting .289 with 12 homers and 41 RBIs.

"I know the bullpen has been beat up here lately and we've lost some games, but we have confidence in these guys," Cash said.

"There's a bunch of guys that are capable of getting big outs in the eighth and ninth," he added. "We've just been talking about it a little more because we haven't done it as of late."

The next week could set the tone for the remainder of the season.

After travelling to Baltimore, beginning a stretch in which Tampa Bay will play just 10 of its next 41 games against teams that currently have winning records, the Rays head to Yankee Stadium for four against the AL East leaders.

New York has won nine of 13 meetings between the teams.

"We're still a very young team but that's not an excuse. We've got to find ways to get better," Cash said.