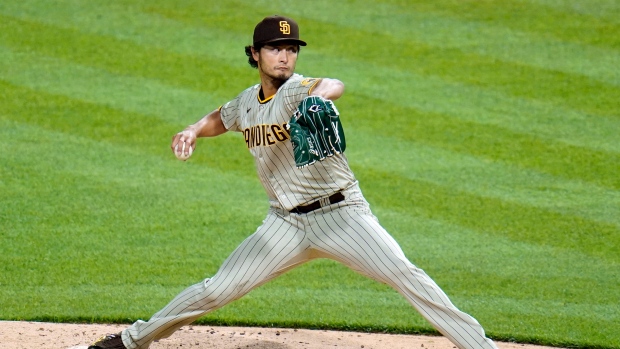 PITTSBURGH — The San Diego Padres have the best bullpen in the majors at the moment. The most overworked one, too.

Yu Darvish did what he could to give them most of the night off.

The 34-year-old ace allowed three hits over seven dominant innings, Wil Myers drove in five runs and the Padres extended their strong start with a 6-2 win against the Pittsburgh Pirates on Monday.

Darvish (1-0), acquired from the Chicago Cubs in December in hopes of helping San Diego chase down the World Series champion Los Angeles Dodgers, struck out six and walked one in a crisp performance as the Padres won their fourth straight. The four-time All-Star worked efficiently, throwing 63 of 95 pitches for strikes and permitting just one runner past second base.

Perhaps just as importantly, Darvish ate up 21 outs to give the bullpen a bit of a break. San Diego relievers entered the game having worked a major league-high 43 innings, including 8 1/3 in Texas on Sunday after starter Adrian Morejon left in the first with an injury.

Darvish made sure only light work was required against the rebuilding Pirates. His lone hiccup came with two outs in the third when Adam Frazier singled and Phil Evans followed with an RBI double that tied the game. Darvish retired 14 of his final 15 batters in a start that mirrored most of the ones he made for the Cubs last season, when he went 8-3 with a 2.01 ERA to finish second in NL Cy Young Award voting behind Trevor Bauer.

"It’s no secret what we had to do yesterday,” Padres manager Jayce Tingler said. “We’re obviously short-handed in the bullpen and for Yu to go out and give us those seven innings was huge.”

The game marked the 26th time in his career Darvish allowed three hits or fewer in seven innings. He admitted he tried to induce contact early to save pitches before a fastball to Bryan Reynolds in the third, one that felt so good everything else sort of came together.

“Obviously, you know that our bullpen had been taxed because of what happened last night,” Darvish said. "For me the goal was to go as long and deep as possible.”

Myers hit a two-run homer to the bushes beyond centre field in the sixth off 21-year-old reliever Luis Oviedo (0-1) to put San Diego in front to stay. Myers added an RBI single in the first to go with a two-run single in the seventh and is batting .370 (10 for 27) during his seven-game hitting streak. Coming to the plate with teammates on base is helping his approach.

“When you’ve got guys that are on base, it puts a lot more stress on the pitcher,” Myers said. “You work your at-bats to look for a mistake.”

Trevor Cahill, signed as a free agent a month ago and given a shot to fill out a patchwork Pirates rotation, bounced back from a rocky 2021 debut by matching Darvish nearly pitch for pitch. Cahill allowed one run on five hits with two walks and eight strikeouts in five innings, relying heavily on movement to offset a fastball that tops out at 91 mph.

“I feel like you’re never really satisfied, but I think I’m definitely getting to where I’m being comfortable out there,” Cahill said. "It seems like a regular season game form, I guess. It’s hard to explain. Just the whole environment thing, getting comfortable with runners on and all of that, the signs and everything that goes into it. I just felt a lot more comfortable today.”

Padres: Morejon was placed on the 10-day injured list with a left forearm strain and San Diego recalled RHP Nabil Crismatt from the alternate training site. The team hadn't decided who will replace Morejon in the rotation. His next scheduled start was Friday at home against the Dodgers.

Padres: Blake Snell (0-0, 1.86 ERA) will make his third start for San Diego after being acquired from Tampa Bay in the off-season. Snell lost his only career start against Pittsburgh, dropping a 6-2 decision on June 28, 2017. Only one player who appeared in that game remains with the Pirates: RF Gregory Polanco.

Pirates: Chad Kuhl (0-1, 6.43) will try to work past the fourth inning for the first time this season on Tuesday. Kuhl allowed five runs (four earned) in a loss to Cincinnati last Wednesday.