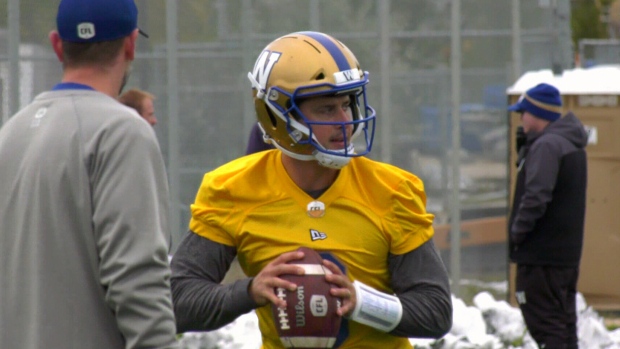 WINNIPEG — Zach Collaros is preparing to grab the opportunity to start for the Blue Bombers if he gets the call on Friday.

The newly acquired veteran quarterback ran most of Winnipeg's first-team offence at Tuesday's practice because starter Chris Streveler was absent.

Streveler appeared to injure his right ankle late in Winnipeg's 37-33 loss to the Calgary Stampeders last Saturday. The Bombers (10-7) wrap up their regular season hosting the Stamps (11-5) on Friday.

"Any time you have an opportunity to play, it's a great thing, right?" said Collaros, who was acquired in a trade with the Toronto Argonauts Oct. 9 in exchange for draft picks.

"You prepare every single week thinking it's going to be your shot and just go from there."

"He had the day off today and we'll see where that puts us tomorrow," O'Shea said.

He was "hopeful" Streveler would practise this week, but said he didn't need to if he's ready to go. The team has a closed practice Wednesday and a walkthrough Thursday.

"You saw how tough he was. He finished the game. He's tough," O'Shea said.

Streveler had come out of the Calgary game for a series, with rookie Sean McGuire going in for two throws that didn't gain a first down. When Streveler returned to the field, he was visibly limping.

O'Shea said medical staff and then Streveler told him he was good to go back into the game.

Streveler got the starting job when he replaced Matt Nichols, who was sidelined with a shoulder injury in mid-August when the team was 7-2. Nichols had season-ending surgery last month.

If Collaros is tapped to start Friday, O'Shea said he feels comfortable he'll know enough of the playbook.

Collaros began the season with the Saskatchewan Roughriders, but suffered a concussion during the first drive of the team's season-opening loss to Hamilton. He was traded to the Argonauts in late July and never got into a game.

"It feels really good just to be in a huddle and be at practice," said Collaros, 31, who's in his eighth CFL season and has thrown for 16,758 yards and 92 touchdowns in 73 games.

If he plays, he'll likely pass more than Streveler.

"I definitely can't run the ball like he did the other night," Collaros said. "That was really impressive. You know, hat's off to him for just his toughness and will to win …

"I want to bring my experience into the room and try to lead the guys the way I always have, by example."

Bombers offensive co-ordinator Paul LaPolice said Collaros has "tools" and they're working together to chose the best plays for him if he starts.

"He processes quickly," he said. "I think he sees coverage well and he's an accurate quarterback who's played a lot of games."

Veteran running back Andrew Harris said the offence will roll with whichever pivot is under centre, but Collaros is a good addition.

"I said this from the beginning, bringing him in is another set of eyes that's seen another set of defences and has played in different offences," Harris said.

Winnipeg, which ends the regular season with a bye, is trying to earn a West Division home playoff game in a battle with Calgary and Saskatchewan (11-5).