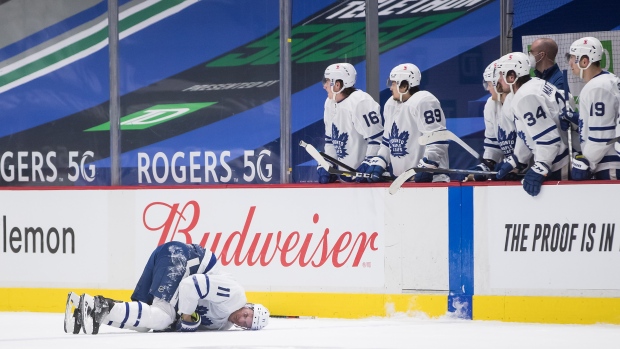 Hyman was not on the ice at practice Monday evening, while Edler was suspended two games by the NHL.

The incident occurred in the second period of the Canucks' 3-2 overtime win over the Maple Leafs on Sunday, with Edler being assessed a five-minute major penalty and a game misconduct on the play.

Hyman left the game and did not return after being caught by the outstretched right leg of Edler in the neutral zone. He was down for a period of time in obvious pain on the ice before limping down the tunnel.

“It was tough. He’s such a huge player for our team,” Leafs forward William Nylander said after the game. “Hopefully he’ll be fine. It was a pretty dirty hit.

"Anybody who watches knows how valuable a player he is for us on the ice," Jason Spezza said Monday.

The 28-year-old Hyman has 15 goals and 18 assists in 43 games so far this season for the Maple Leafs.

Meanwhile, William Nylander skated in grey Monday, which is usually reserved for members of the taxi squad. However, Nylander skated on a regular line with John Tavares and Alex Kerfoot. Pierre Engvall and Adam Brooks skated in regular white sweaters.

Leafs practice is underway in Vancouver

William Nylander wearing grey, which is usually for extras

After practice, Keefe noted that forward Ilya Mikheyev is questionable for Tuesday's rematch against the Vancouver Canucks after leaving early in Monday's practice.

Nick Foligno will join the Maple Leafs in Winnipeg on Wednesday and his first full day with the club will be on Thursday.