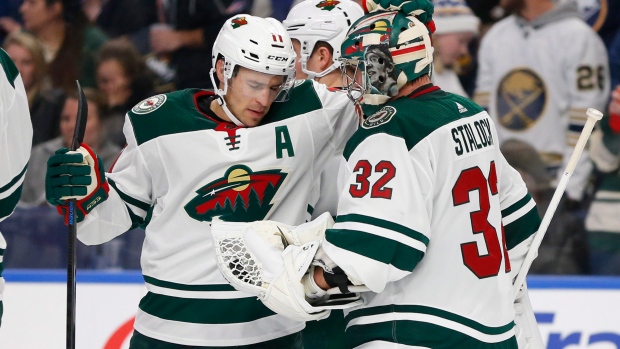 BUFFALO, N.Y. — Zach Parise and the Minnesota Wild have been striving for stronger starts during an opening stretch in which they’ve played more road games than any team in the NHL.

They did just that Tuesday night.

Parise scored twice in the first period, Alex Stalock made 30 saves, and the Wild beat the Buffalo Sabres 4-1.

“There hasn’t been a lot of games we’ve jumped out to the lead,” Parise said. “It’s an easier game to play when you have that cushion and you’re not chasing the game.”

Jason Zucker added a goal and an assist, and Jonas Brodin also scored for the Wild, who improved to 4-2-1 in their last seven.

Minnesota has played 14 of its first 21 games on the road, the most in the NHL. The Wild’s nine home games in October and November are the fewest in franchise history.

Joel Eriksson Ek set up Parise on a 2-on-1 to give the Wild the lead a little more than eight minutes into the first period. Parise extended his scoring streak to three games when he skated past Buffalo forward Casey Mittelstadt to receive Eriksson Ek’s backhand pass and lifted a one-timer over Linus Ullmark’s blocker.

Parise scored his second goal on a power play with 4 seconds remaining in the first. Parise deflected Ryan Suter’s shot from the point into the net for his eighth goal of the season and 347th point with Minnesota, tying Pierre-Marc Bouchard for third on the franchise list.

“It was big for Zach to get a couple goals and for us to come in with the lead after the first period,” Suter said.

The Sabres were sluggish from the start in playing their third game in four nights. They are on a 1-6-2 skid and battling injuries at the forward position following 9-2-1 start.

“I thought the second half, at least, showed a fighting spirit,” Sabres coach Ralph Krueger said. “It wasn’t pretty, maybe. But we will stick together, and we’ll work on it, and we’ll fight our way out.”

Brodin scored his first goal of the season to make it 3-0 early in the second period. Receiving a pass from Zucker in the left circle, Brodin slipped a backhand between Ullmark’s pads. Krueger challenged that Wild defenceman Matt Dumba was offside but video reviews determined Dumba got back behind the blue line in time.

Sabres captain Jack Eichel showed his frustration shortly after Minnesota’s third goal when he tried to start a fight with Eriksson Ek immediately following a faceoff. Eichel, who scored the Sabres last five goals entering the game, received a four-minute double minor for roughing while the Wild were not penalized.

“Just trying to spark some energy,” Eichel said. “No one’s feeling sorry for us. We can’t feel sorry for ourselves. It’s frustrating the position we’re in. But it’s just going to test our character right now, and our will to compete on a nightly basis, and just our will to win.”

Montour knocked in the rebound of Eichel’s shot from the point to score his first goal of the season and break Stalock’s shutout with 3:49 remaining in the game.

Zucker scored his sixth goal of the season for Minnesota less than two minutes later.

NOTES: Sabres general manager Jason Botterill said before the game he is “optimistic” D Zach Bogosian will return during at some point during the team’s coming three-game road trip. Bogosian has been out since having hip surgery last spring. … Dumba did not play in the third period for the Wild due to an undisclosed injury. ... Minnesota has earned a point in its last seven games at Buffalo (6-0-1), the team's longest active road point streak against an opponent. ... Sabres D John Gilmour played on the fourth line due to Buffalo having only 11 healthy forwards.

Wild: Host Colorado on Thursday night before going back on the road for a three-game trip.