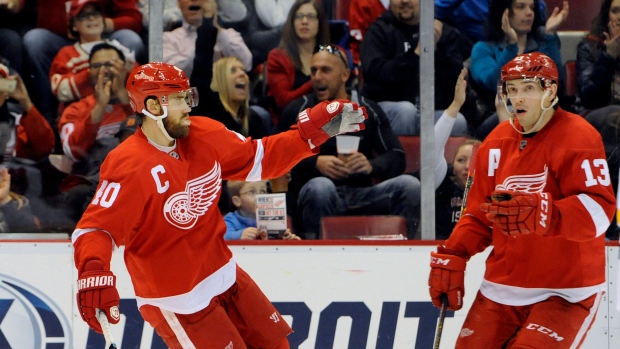 DETROIT - By the time Henrik Zetterberg scored his third goal of the third period, a terrible start by the Detroit Red Wings was all but forgotten.

Zetterberg's hat trick capped an impressive Detroit comeback, lifting the Red Wings to a 6-4 victory over Buffalo on Sunday night in a game the Sabres led 3-0 after one period. It was Buffalo's 11th consecutive loss.

"We knew we had to play better to turn it around," Zetterberg said. "We knew that if we could get one, we were gonna get a few more. Also, if we started playing the way we should play, we would have a good chance of winning the game."

It was the sixth career hat trick for the Detroit captain, and it helped goalie Tom McCollum earn his first career victory. McCollum came on during the first period to replace Petr Mrazek, who allowed three goals on seven shots.

Buffalo barely put any pressure on the Red Wings after that early lead. McCollum, whose only other NHL appearance came in 2011, was credited with only seven saves in over 45 minutes of action.

"There are going to be certain nights when world-class athletes are going to out-skill us and we believe that's what happened tonight," Buffalo coach Ted Nolan said.

Tyler Ennis scored twice for the Sabres, including a goal in the third that made it 5-4, but Zetterberg answered with his third goal of the period.

All 11 of Buffalo's defeats during this skid have been in regulation. The last time a team lost 11 in a row, all in regulation, was when Pittsburgh dropped 13 straight from Jan. 13-Feb. 12, 2004, according to STATS.

Drew Stafford opened the scoring for Buffalo early in the first, and Ennis made it 2-0 when his shot from a severe angle to the right of the net slipped past Mrazek, who was starting in place of the injured Jimmy Howard.

Mrazek was pulled after Chris Stewart's goal with 6:23 left in the period, and it was still 3-0 after one.

"Obviously, we were embarrassed. That was as bad as we've been," Detroit coach Mike Babcock said. "You've got to give the guys a lot of credit. This is two huge points for us. It was one that could have slipped away, but we didn't let that happen."

Buffalo wasn't credited with a shot on goal in the second until the period was more than half over. By then, Gustav Nyquist, Drew Miller and Tomas Tatar had scored for Detroit to tie the game.

Zetterberg went to work early in the third, knocking in a rebound while the Red Wings had an extra skater on the ice during a delayed penalty on Buffalo. He added a power-play goal to make it 5-3, and after Ennis scored for the Sabres, Zetterberg completed his hat trick, beating Buffalo goalie Jhonas Enroth from near the right faceoff dot with 8:01 remaining.

"I think it's been a while, so it's always nice to see the puck go in," Zetterberg said.

Enroth had 20 saves. The Sabres did not pull their goalie at the end of the game while facing a two-goal deficit.

NOTE: Howard has been out with a groin injury, and Detroit was also without D Jakub Kindl (elbow), RW Tomas Jurco (back), G Jonas Gustavsson (shoulder) and RW Johan Franzen (head). ... Buffalo was missing D Mike Weber (lower body), C Brian Gionta (head), RW Cody McCormick (blood clot in leg) and LW Marcus Foligno (hand). ... Sabres D Tyson Strachan was helped off the ice after a shot appeared to catch him in the side of the face immediately before Nyquist's goal. Strachan later returned to the game.