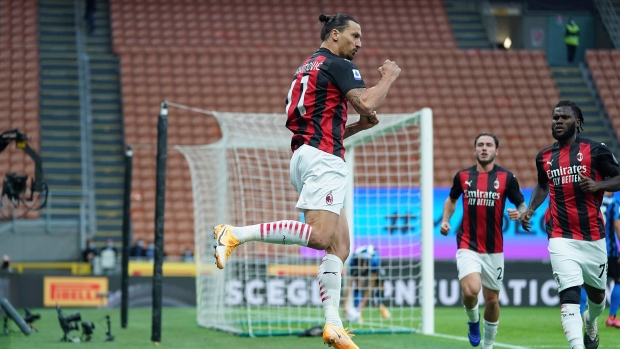 MILAN — Zlatan Ibrahimovic made a winning return after being sidelined with the coronavirus as AC Milan beat Inter Milan 2-1 in an entertaining derby match on Saturday.

Ibrahimovic only resumed training this week after recovering from the virus but the 39-year-old Swede scored twice early on. Romelu Lukaku netted for Inter in the 29th minute.

“I'm very hungry because they locked the wrong animal at home,” Ibrahimovic said. "After two weeks at home, it's not easy. Mentally it's hard to be always at home.

“Being stuck at home the tempo drops off completely and the body starts to tremble because it wants to work and to play.”

It was Milan’s first win in the derby in the league since 2016 and left the Rossoneri top of the table. Milan is the only team with a perfect record, having won all four of its matches this season.

Milan is three points above Atalanta, which lost 4-1 at Napoli, and four points above Juventus, which was held to a 1-1 draw at newly promoted Crotone.

Inter is sixth, five points below its city rival.

“We all need to improve but, had we made more of our chances, people would be talking about a different Inter,” Nerazzurri coach Antonio Conte said. “It’s a real shame, because the game ended in a loss and, worst of all, it’s a derby defeat.”

It was a strange atmosphere at San Siro with only 1,000 fans allowed in the 80,000-seat stadium because of the coronavirus pandemic.

However, both teams were welcomed by hundreds of supporters as the team buses arrived at the stadium. Flags were waved, banners unfurled and fans roared their support -- through their masks.

Milan had Ibrahimovic back and the forward had an almost immediate impact.

Ibrahimovic won a penalty after a reckless tackle by Aleksandar Kolarov and, although his spot kick was saved by Samir Handanovic, the former Inter forward tucked home the rebound to put Milan in front in the 13th minute.

Milan doubled its lead just three minutes later with a fantastic team move as Hakan Çalhanoglu sent Rafael Leão down the left flank and he crossed for Ibrahimovic to volley in.

Inter halved the deficit when Ivan Perišic crossed for Lukaku to sidefoot home. It was the first league goal Milan had conceded this season.

Inter, which had fought back from 2-0 down to win 4-2 the last time the two sides met, almost levelled shortly after as Lautaro Martínez’s header looped over Milan goalkeeper Gianluigi Donnarumma but Simon Kjær cleared off the line.

The Nerazzurri should have equalized on the hour when Achraf Hakimi was left unmarked but his header flew inches wide of the left post.

Inter was awarded a penalty in the 75th after Donnarumma brought down Lukaku but the referee changed his mind after video review showed the Inter forward was offside.

Federico Chiesa was sent off on his debut for Juventus as Crotone earned it first point back in Serie A.

Juventus was without Cristiano Ronaldo and Weston McKennie, who both tested positive for COVID-19, and also had several other players out injured.

Simy gave Crotone a surprise lead from the penalty spot in the 12th minute after Leonardo Bonucci fouled Arkadiusz Reca.

Chiesa set up Álvaro Morata for the equalizer nine minutes later but was shown a straight red on the hour following a challenge on Crotone midfielder Luca Cigarini.

Juventus thought it had scored shortly after but Morata's effort was ruled out for offside on video review.

The only positive note for Atalanta from a miserable afternoon was the return of key forward Josip Ilicic.

The 32-year-old Ilicic hadn’t played since July and had been given compassionate leave by Atalanta because of personal issues.

Ilicic started against Napoli but couldn’t prevent his team from slipping to a hefty defeat -- only Atalanta’s second loss since January.

Hirving Lozano scored twice for Napoli and there were also goals for Matteo Politano and Victor Osimhen in the first half. Sam Lammers netted a consolation for Atalanta in the 69th.