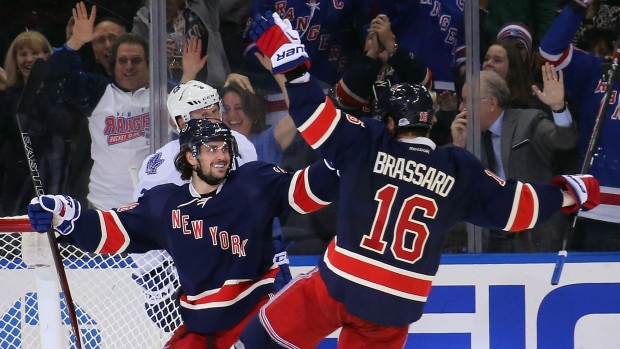 NEW YORK, N.Y. - The New York Rangers have waited all season for their top line to dominate a game.

Zuccarello recorded his first NHL hat trick, and Brassard and Nash each assisted on all three goals in the Rangers' 3-1 win over the Toronto Maple Leafs.

It was the first time since March 30, 1975 that a Rangers player had a hat trick and his linemates were credited with primary and secondary assists on each goal, according to the Elias Sports Bureau. Steve Vickers scored four times in that game, and Jean Ratelle and Rod Gilbert had the assists.

"We got results from our difference makers," said Rangers coach Alain Vigneault, who had reconfigured his top two lines, reuniting Zuccarello with Brassard and Nash and putting Chris Kreider back with Derek Stepan during a four-day break between games. The Rangers' last game was 4-1 win over Calgary on Oct. 25.

"They had their best game of the year at both ends of the rink. They were real solid," Vigneault added.

Vigneault's lineup juggling appeared to rejuvenate the Nash-Brassard-Zuccarello trio. The line accounted for three goals and six assists and had nine of New York's 26 shots.

"We knew when (Vigneault) put us together (during Thursday's practice) we had to come out bit," Brassard said. "That's what we did."

Zuccarello opened the scoring at 9:41 in the first with his fifth of the season. Stationed inside the right circle, he one-timed Brassard's feed past Jonathan Bernier. New York held onto the 1-0 lead until Zuccarello finished a 2-on-1 by driving Brassard's pass over Bernier at 5:34 of the third.

His empty netter with 48.6 seconds left sealed the scoring.

"It's always fun to score goals," Zuccarello said. "It's not every day you score three."

Henrik Lundqvist made 22 saves as the Rangers improved to 7-2-2. New York has won four of its last five, earning 10 points in its last six games.

"I thought we played a really good game," Lundqvist said.

Despite having lost their fifth in a row, the Maple Leafs echoed Lundqvist's theme when they analyzed their performance.

Lupul appeared to tie the game at 12 seconds into the third, but the goal was waived off. The sequence began with a Leafs defenceman taking a slap shot from the point while Lupul jostled with Rangers defenceman Marc Staal in front of Lundqvist. The puck appeared to change direction before going into the net, but the goal was immediately disallowed.

"I didn't feel like I touched Lundqvist," said Lupul, who added the Leafs were able to see replays due to a television monitor by the bench. "We could see I didn't (make contact with Lundqvist). I was in the crease so it was a close play."

Leafs coach Mike Babcock used a challenge to review the play but the call was upheld.

NOTES: Rich Clune made his season debut for the Leafs. ... New York scratched defenceman Dylan McIlrath and left winger Viktor Stalberg. The team cleared Stalberg on Thursday after he suffered a head injury in a centre-ice check from Flyers defenceman Radko Gudas in the Rangers' 3-2 shootout loss on Oct. 24. ... Toronto's scratches were defencemen Frank Corrado and Scott Harrington, and right wing Brad Boyes. ... The loudest cheers from the announced 18,006 in attendance were for the highlights of two-run home runs by the New York Mets' David Wright and Curtis Granderson, and Michael Conforto's RBI single in Game 3 of the World Series against the Kansas City Royals. ... The Leafs host Phil Kessel and the Pittsburgh Penguins on Saturday night.