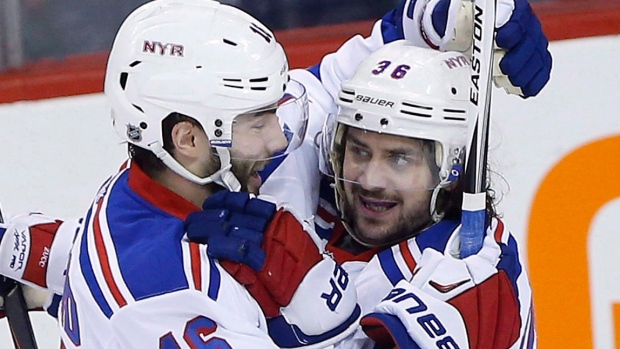 NEW YORK, N.Y. - Injured Rangers forward Mats Zuccarello skated on his own Monday morning, though he remains out indefinitely with a suspected head injury.

Zuccarello hasn't played since getting hit in the side of the helmet by teammate Ryan McDonagh's shot in Game 5 of New York's first-round series against Pittsburgh. He doesn't appear close to playing in the Eastern Conference final against the Tampa Bay Lightning, but skating "lightly" represented progress.

"He's just going through the process of getting healthy," Rangers coach Alain Vigneault said. "He's skated a little bit on his own today, and I'm assuming that's going to get a little longer here as we move forward."

The status of injured Lightning centre Brian Boyle is less clear after he missed Game 1 on Saturday with an undisclosed injury. Although Boyle skated, doing sprints and moving side to side, coach Jon Cooper offered no update about when he would play again.

"He's a great leader in this room, he's played a lot of hockey at this time of the year," captain Steven Stamkos said. "It was tough for him to not be in the lineup for us. ...

"But we've had guys step in and the depth of this team has been a strength of ours all year."

Tampa Bay's depth was tested last round against the Montreal Canadiens when winger Ryan Callahan missed Game 6 when recovering from an emergency appendectomy. Callahan was back on the ice for Game 1, less than five days after the operation, and reported being no worse for wear.

Callahan followed Jonathan Ericsson, Nick Schultz and Brad Richardson in returning quickly from an appendectomy to play in the playoffs. That's not a club he's bragging about joining.

"It's not something I'm really proud to be a part of, I don't think," Callahan said. "I would've rather played in Game 6, too, the series before. But things happen in the playoffs. It is what it is, you've just got to roll with it."