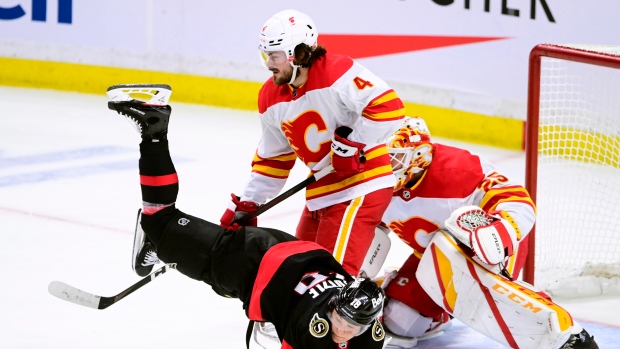 Calgary Flames defenceman Rasmus Andersson said on Tuesday there was “nothing intentional” when he tried to pick up the game puck following 2-1 loss to the Ottawa Senators on Monday night.

Senators’ goaltender Filip Gustavsson stopped 35 of 36 shots to earn his first NHL win. Following the final horn, Andersson attempted to pick up the game puck and leave the ice with it before Ottawa teammate Brady Tkachuk got Andersson’s attention, eventually retrieving the memento for Gustavsson.

Speaking with the media on Tuesday, Andersson denied any malicious intent behind his actions.

“Honestly, it was in the heat of the moment,” said Andersson. “I picked the puck up and didn’t really think. I was just really pissed off because they scored a late one there.

“As soon as I realized it was his first NHL win and their whole team was yelling towards me, I chucked the puck back. It was nothing intentional or anything like that.”

Despite the animosity between the teams following the game, Andersson believes the incident is now water under the bridge.

“I think [it is]. As I said it wasn’t anything intentional,” said Andersson. “It was his first NHL win and obviously he should get the puck. I wasn’t thinking ’I’m going to steal this puck’ or anything.”

The Flames and Senators will play each other once again on Wednesday night.