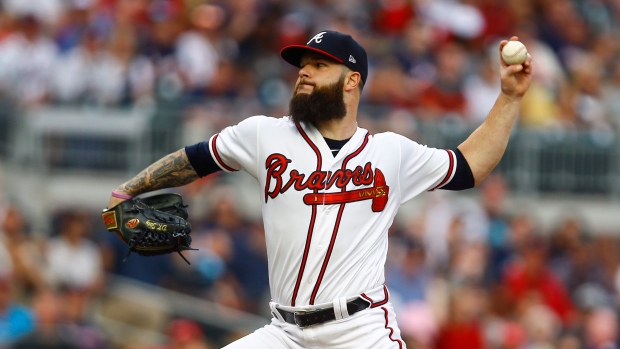 SCOTTSDALE, Ariz. — When you combine the obvious need with the amount of resources, it’s clear Toronto Blue Jays GM Ross Atkins both wants to be and has the ability to be very active on the rotation front this winter.

One quote stood out from Atkins back in October when talking about the priorities this off-season.

“It’s not good enough just to have depth,” Atkins said. “We have to have guys who can contribute in significant ways.”

That’s a stark departure from his depth-focused off-seasons of 2017 and 2018, and it seems like we’ve finally reached the point where this front office regime is ready to start making more moves that impact the roster in significant ways.

Free agency and the trade market? The track record there has left something to be desired, without a doubt.

Kendrys Morales for three years and $33 million, and Jaime Garcia for one year and $10 million represent the largest free-agent outlays Atkins & Co. have committed to up to this point.

It would be a surprise if that didn’t change this winter, and multiple people with knowledge of what’s going on around baseball have said the Blue Jays are already being much more aggressive than in years past.

With pitching the clear top need and the 2019 GM Meetings underway this week at the Omni Scottsdale Resort & Spa at Montelucia, here are 10 names – eight of them starters – that the Blue Jays could target on the free-agent market.

If Gerrit Cole and Stephen Strasburg are the top tier of starters available, Wheeler is in the next group, alongside Madison Bumgarner and Hyun-Jin Ryu.

He’s going to cost a pretty penny, with most estimating a deal in the $100 million range over four or five years.

The sixth-overall pick in the 2009 draft was unable to stay healthy early in his career, but the 29-year-old righty has produced back-to-back seasons of 4.0-plus fWAR and seems to be finally fulfilling all of that promise.

You need a GM with an appetite for risk – Atkins hasn’t been that, but mounting pressure might change things – because even at that price Wheeler could look like an absolute steal as a top-of-the-rotation starter a couple years from now, or he could struggle to stay healthy and you could have an immovable contract on your hands.

Once you get past the aforementioned five names, Keuchel leads off a group of mid-rotation options that could provide a valuable 180-plus innings, which is starting to become a rare thing across baseball.

The qualifying offer the lefty got from the Houston Astros last off-season killed his market, and Keuchel was forced to wait until after the draft in June to sign a one-year, $13-million deal with the Atlanta Braves.

For that price, Keuchel went out and posted a 3.74 ERA across 19 starts in Hotlanta.

With no QO this year, Keuchel will get his multi-year deal. The ground-ball specialist — 58.9 per cent for his career — might be able to survive in the AL East, and the two-year, $34-million deal with an option for a third season that the New York Yankees gave J.A. Happ last winter might be a good starting point.

The Blue Jays’ below-average infield defence might be a factor here, however, and just don’t expect a repeat of his 2015 Cy Young season.

The Braves thought $12 million was too much for this right-hander, who, despite throwing at least 174.2 innings for seven straight years, will be heading into just his age-29 season in 2020.

The advanced metrics don’t like him as much as the traditional numbers – he holds a 3.67 career ERA and a 4.23 FIP – but there’s some intriguing upside here as a relatively young, durable mid-rotation starter.

If he can get the walks under control, Teheran could find another gear.

It’s hard to endorse signing a pitching coming off a season with a 5.52 ERA, but Porcello’s track record over 11 big-league seasons is that of a consistent mid-rotation arm who doesn’t walk anyone and has a Cy Young in his trophy case.

The issue for Porcello has been the home run – he gave up 31 of them, tied for seventh-most in baseball – and he may have zero interest in another tour through the AL East, but he’s a proven commodity that should come at a modest price after a tough year.

The Twins were starting to reap the benefits of their reclamation project signing, before the 6-foot-7, 280-pound righty was popped for a PED violation in September.

Up to that point, Pineda provided flashes of brilliance, finishing with a 4.01 ERA over 26 starts and continuing to show the excellent control that marked his (healthy) time in a Yankees uniform.

There’s obviously an element of risk with the diuretic he tested positive for commonly used as a steroid masking agent, but the fact his suspension was reduced from 80 games to 60 suggests MLB believes there’s a chance Pineda wasn’t using it for that reason.

Turning 31 in January, there’s intriguing upside here and the suspension may help lower the price.

Every year, there seems to be a former MLB arm who returns from overseas with a completely different resume.

This year, it’s Lindblom, a second-round pick of the Los Angeles Dodgers in 2008, who posted 2.88 and 2.50 ERAs over the past two seasons in the Korean Baseball Organization.

Lindblom’s spin rates have reportedly intrigued MLB clubs, and the Blue Jays are into that – it was one of the aspects they liked about Trent Thornton’s profile when trading for him last year – so it would make sense.

Again, a modest price and a little bit of upside are the attraction here.

Coming off a terrible season with the Cincinnati Reds due to a lingering back injury, Wood is simply a buy-low opportunity.

But he could be a pretty good one if can stay on the mound. In the four seasons he’s been able to throw at least 150 innings, he’s never registered an ERA above 3.84.

On a one-year deal, the southpaw could be a steal if the medical reports are encouraging … or he could spend the majority of the year on the injured list.

In the same boat as Wood, Wacha’s career has been plagued by injuries, and that inability to stay healthy has affected his performance.

Wacha bounced in and out of the St. Louis Cardinals rotation in 2019 and the big right-hander finished with a 4.76 ERA, allowing a staggering 26 homers in 126.2 innings.

Wacha is going to be interested in a one-year pact that allows him to rebuild his value, and the Blue Jays are going to need to hit on one of these reclamation-project arms at some point, like they thought they had with Matt Shoemaker last year.

Now we move on to a couple of bullpen arms that could give the Blue Jays another July trade chip and increase their ability to deal closer Ken Giles this winter.

Betances has been seen as a closer-in-waiting for a number of years now, but a stacked Yankees bullpen has, for the most part, kept him out of the ninth inning over his first five big-league seasons.

The question with Betances right now is health.

A shoulder injury sidelined the right-hander for the first five months of 2019, but the concern now is the partial Achilles tear he suffered in his first game back, which occurred during a hop off the mound at Rogers Centre.

Betances is another candidate for a one-year deal, and Atkins could gamble and lure him to Toronto with a lucrative offer and the promise of the closer’s role.

Another power bullpen arm, Pomeranz was on my list of free-agent targets last off-season, too, but at that point he was still a starter.

After a mid-season trade sent the southpaw to Milwaukee, the Brewers shifted Pomeranz to the ’pen and he took off.

As is usually the case, the velocity ticked up into the mid-90s and the soon-to-be 31-year-old produced a dominant 45 strikeouts in 26.1 innings to go along with a 2.39 ERA.

A multi-year deal might be needed to get it done, but gambling that you’re getting the next prime Andrew Miller might be worth it in the end, even if relievers aren’t a priority on the Blue Jays’ shopping list.​