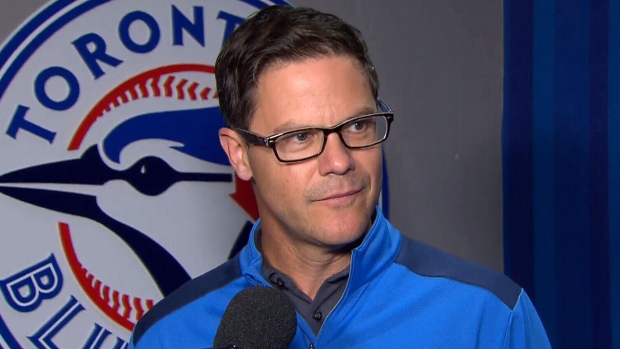 SCOTTSDALE, Ariz. — As baseball executives filtered into the Omni Scottsdale Resort & Spa at Montelucia on Monday, most of the talk surrounded the expensive pursuits of aces Gerrit Cole and Stephen Strasburg.

Those are two names Toronto Blue Jays GM Ross Atkins will not be in on.

There’s an argument to be made that the Jays should be interested, but let’s be real here: Cole and Strasburg won’t be open to a trek north of the border and a cross-your-fingers rebuild, or be able to turn away from the allure of home in California and interest from baseball blue bloods like the New York Yankees.

An elite free agent will be drawn to Toronto someday, but today is not that day. Not these guys.

But unlike the past two winters, Atkins has promised to be active and there seems to be proof of that, as multiple people across baseball have already indicated that’s the case based on their early groundwork this month.

Atkins feels a cleaned-out clubhouse and names like Vladimir Guerrero Jr., Bo Bichette and Cavan Biggio are starting to give the Jays a pretty good conversation starter when it comes to their pitch to free agents.

“As important as the talent on the field that showed very well in the second half, is the environment that we have is what we feel is a special one,” Atkins said. “We’re not where we need to be yet because it needs to be much higher on the wins than the losses, and we feel that the free agents and potential acquisitions that we’re talking to, we’re talking to about improving that environment and making it even better.

“The other things are strategic things that we’d rather not share, even it’s a very small thing that’s in the form of recruiting.”

Atkins will have to prove to a frustrated fan base that they’re really willing to open the Rogers chequebook and start spending some money, and there are ways to make that happen without being in on Cole and Strasburg.

Zack Wheeler is out there and fits well. He could approach $100 million.

More realistically, names like Dallas Keuchel, Michael Pineda and Julio Teheran would immediately improve the rotation, but are unlikely to grab headlines and do come with elements of risk.

“We’re going to look to sign even more established veterans than just Matt Shoemaker,” said Atkins, noting one of their biggest additions last winter. “I think we have more financial flexibility, we have more depth on our 40-man that can protect us in the event of injury, and we have the ability to entice more free agents, as well.”

Going from 67 wins to 90 isn’t going to happen, but you don’t build a postseason contender in one off-season.

Now that the aforementioned trio has arrived, the service-time clock is ticking and wasting the cheap, controllable years of surplus value they’re expected to provide simply can’t happen.

Atkins says there’s no extra pressure on his front office this winter.

“We’re not putting any increased pressure on individuals here that we have to do something, we must do something now, today, or yesterday, or tomorrow,” he said.

“Since day one of the quiet period, we’ve been exceptionally busy on the phone and then since the first day of free agency it feels like we haven’t really stopped. Now, it’s just the meetings are occurring in person.”

After shaking up their front office early in the off-season by firing GM Neal Huntington, the Pittsburgh Pirates were quickly linked to Blue Jays VP of baseball operations Ben Cherington.

Usually seen strolling around the GM Meetings with the Jays’ front office contingent, Cherington is nowhere to be found this year, and it’s obvious why.

It would not be a shock to anyone if Cherington, the former Red Sox executive who built a World Series winner, got the Pirates’ job, and maybe soon.

QUALIFYING OFFER NOT A DETERRENT

Ask Keuchel and Craig Kimbrel what that meant for their respective markets last off-season, as it essentially scared teams off and forced them to wait until June — compensation disappears after the draft — to sign.

It’s obviously a case-by-case basis, but Atkins says giving up draft picks won’t scare the Jays off, and that matters because Wheeler and outfielder Marcell Ozuna, two players they could kick tires on, are in that boat.

“We factor in what it means to help our team win sooner and what that tradeoff is,” Atkins said. “It’s not something that’s going to get in the way of us acquiring talent.”

As expected, Houston Astros slugger Yordan Alvarez was the unanimous winner of the American League rookie of the year award Monday evening, getting all 30 first-place votes from the Baseball Writers Association of America.

Somewhat surprisingly — or maybe not so much if you compare the fWAR at 2.4 to 0.4 — Biggio received one more second place vote than Guerrero Jr. to finish fifth in voting.

Atkins touched on the off-season workout plans for Guerrero, which is sure to be a hot topic once spring training starts Feb. 13.

“He’s working very hard,” Atkins said. “He’s in the Dominican now. He was in Tampa for a few weeks, working out with our medical staff there. Every day was extremely consistent. I’m sure you guys saw some of the videos with him and Rowdy. He’s committed. The best thing to see is how much he’s enjoying the process, how much he’s enjoying the work, and sticking to a plan that he set out to from day one and he hasn’t missed a beat.”

Guerrero is expected to split his time between the Dominican and Dunedin this winter.

Even though he was due another raise in arbitration this off-season, it was somewhat surprising when the Jays cut ties with Ryan Tepera, a fairly reliable reliever who had posted a 3.64 ERA over five seasons in Toronto.

Thanks to a bone spur in his elbow and subsequent surgery to remove it, Tepera struggled to a 4.98 ERA this season, but Atkins says they may be open to a reunion.

That likely means a significant salary reduction from the $1.525 million he made in 2019, maybe even a minor-league deal.

Atkins said they did try to find a trade partner before ultimately DFA’ing the right-hander.

“From the (trade) deadline, the deadline (in 2018), there’s been lots of discussion in and around potential trades for Ryan Tepera, and we continued that dialogue,” Atkins said. “We weren’t able to find a deal.

“We maintain interest. If there’s a way for him to pitch for the Blue Jays again, we’ll absolutely make that happen. It just came down to roster flexibility and on a much, much smaller scale, having just some clarity for where our needs are really going to be.”