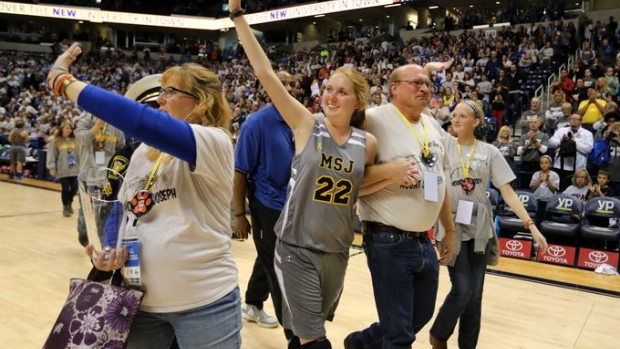 CINCINNATI - Lauren Hill's teammates and coaches are remembering the 19-year-old college basketball player with her own inspiring words: "Never give up."

An example she lived by as she fought a brain tumour and rallied those around her to help her achieve her dream of playing in a game.

Several hundred students gathered on the grassy quad at Mount St. Joseph on Friday, spelling out Hill's No. 22 with blue plastic cups on a chain-link fence a few hours after she died at a local hospital. Her death was confirmed Friday morning by the co-founder of her non-profit foundation, The Cure Starts Now.

Hill attended the Division III school and played after being diagnosed with the inoperable tumour. She spent her final year polishing a layup and inspiring others to live fully.

"She taught us that every day is a blessing, every moment is a gift," school President Tony Aretz said.

She did it by showing up for practice even though turning her head made her dizzy and left her physically spent. She appeared in four games, making five layups, before the tumour's effects forced her to stop.

And she smiled a lot in defiance of the disease that was slowly sapping her of life. Her teammates remembered that smile on Friday.

"This pain will end, the smile will not," junior forward Erica Walsh told the crowd.

Players cried on each other's shoulders while the crowd sang five verses of "Amazing Grace" during the half-hour vigil. Coach Dan Benjamin hugged each player after they attached flowers to the fence in Hill's honour.

Then, they huddled and yelled, "Play for 22," the team's slogan before each game and practice. The team visited Hill on Thursday to say goodbye.

"One of the toughest moments in my coaching career ever was lying next to her in the hospital bed, holding her hand, thanking her," Benjamin said.

An assistant coach read one of her essays that ended with: "Never give up on your dream. Find something to fight for. I fight for others."

Along the way, she became known simply as Lauren, someone who knew how to make the most of every day and who had a knack for encouraging others to do the same. Several restaurants near the college honoured her on Friday with mentions on their advertising boards.

One read: Learn from Lauren, Focus on Giving."

A year and a half ago, Hill was just another high school student getting ready for college. She started experiencing dizziness while playing for her high school team in nearby Lawrenceburg, Indiana. Tests found the tumour. Treatment didn't work. She knew she had less than two years left.

While the tumour squeezed her brain, Hill squeezed back, holding onto life as tightly as she could.

"I'm spreading awareness and also teaching people how to live in the moment because the next moment's not promised," Hill told the AP after one of her team's 6 a.m. practices. "Anything can happen at any given moment. What matters is right now.

"Especially after this kind of diagnosis, your perspective on life and what you value changes."

For Hill, that meant spending time with her parents and a brother and sister, going to college, raising money for cancer research, inspiring others, and achieving her goal of scoring a basket in a game.

A lot of people got involved to make it happen.

The NCAA agreed to let Mount St. Joseph move up its opening game against Hiram College by two weeks because Hill's condition was deteriorating. Xavier University offered its 10,000-seat arena so more people could attend. Tickets sold out in less than an hour.

By the time the game came around on Nov. 2, the tumour had affected Hill's right side so much that she had to shoot with her non-dominant hand. With Tennessee women's coach Pat Summitt and an impressive cast of WNBA players on hand, Hill took a pass and made a left-handed layup only 17 seconds into the game.

She also made the last basket of the game, returning for a right-handed layup.

"Lauren Hill's bravery, enthusiasm and strength were an inspiration not only to those who knew her best but also to the millions of people she touched around the world by sharing her story," Emmert said.

News of Hill's death sparked quick reactions all over social networks. It was a worldwide trending topic on Twitter, where Cavaliers superstar LeBron James wrote a short letter to Hill in a series of five tweets.

"Can u please tell my Grandma I said hello," James said. "Don't be afraid, she knows you cause we spoke about u plenty of times."

Those close to her watched her grit things out as her condition worsened. When the season ended, her team held its annual dinner in a room at the hospital where Hill was being treated.

Hill hoped raising money would help others have a better chance at beating cancer in the future. Her Layup4Lauren challenge and other fundraising activities brought in donations worldwide.

The U.S. Basketball Writers Association voted her the Pat Summitt Most Courageous Award, which is normally awarded at the Final Four. Athletes from other colleges autographed No. 22 jerseys and sent them in support.

As the cancer slowed her down, those around her took a bigger role in promoting her campaign. And she kept reminding everyone to appreciate life.

"Life is precious," she told WKRC-TV. "Every moment you get with someone is a moment that's blessed, really blessed."