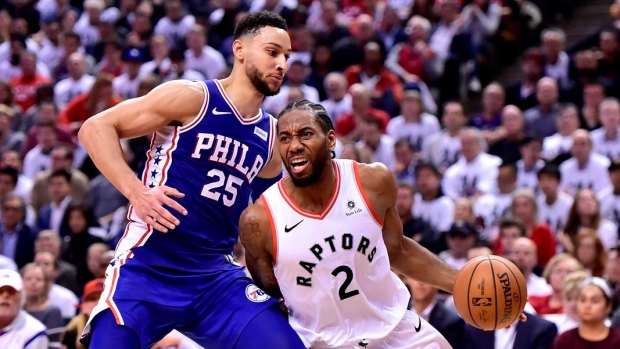 With the National Basketball Association on hold for the foreseeable future, TSN and Sportsnet are airing the entirety of the Toronto Raptors’ playoff run to the 2019 NBA title. You can watch Game 1 of the Eastern Conference semi-finals against the Philadelphia 76ers on Wednesday night on Sportsnet at 8pm et.

Redemption was one of the major storylines running throughout the Toronto Raptors’ 2019 postseason and it came to the forefront in the second round against the Philadelphia 76ers.

A date with the Sixers in the playoffs meant a couple of things for the Dinos, who had swiftly dispatched the Orlando Magic in five games after a Game 1 hiccup.

Firstly, it was an opportunity for the Raptors to once again prove themselves against an Atlantic Division rival and one of the NBA’s most talented teams – one that boasted a star-studded cast including Joel Embiid, Ben Simmons, Jimmy Butler and Tobias Harris. Toronto fared well against Brett Brown’s team in the regular season, going 3-1. Two of those three games took place after the November blockbuster that saw the Sixers acquire a disgruntled Butler from the Minnesota Timberwolves (and, as it turns out, “disgruntled” might just be Jimmy Butler’s default state) with the Raps claiming two of them.

So, while the Raptors were well acquainted with their foes and well aware of the task at hand, there was also the historical significance of a second-round matchup with the Sixers and the unpleasant memories that the one previous playoff series between the two clubs evoked amongst Raptors fans. Though that had no bearing on what the current Toronto Raptors faced, a series win over the Sixers would go a long way in exorcizing the demons of the past for fans with vivid recollections of May 20, 2001.

In 2001, the Raptors won their first playoff series in team history. For a second straight season, they took on the New York Knicks in the first round, but this time they would come out on top in five games (under the NBA’s previous playoff format, first-round series were best-of-five affairs). After going down 2-1 in the series, the Raptors took Game 4 at home on the back of 32 from Vince Carter and then returned to Madison Square Garden for the pivotal decider. Carter poured in 27 and Antonio Davis added 18 and 12 as the fifth-seeded Raptors took out the fourth-seeded Knicks, 93-89.

A date against Allen Iverson and the Sixers in the second round meant facing the East’s top team. The 56-win Sixers finished nine games ahead of the Raptors in the regular season, but the Raptors won three of four meetings between the two teams and confidence was high.

The series opened with a pair of back-and-forth contests. Toronto withstood a furious Sixers rally in the fourth to take Game 1, 96-93, with Carter scoring 35 and Dell Curry adding 20 from the bench. A monstrous performance from Iverson in Game 2 (54 points on .538 shooting) took home-court advantage back for the Sixers with a 97-92 win.

In Game 3 at the Air Canada Centre, Carter responded to The Answer’s Game 2 dominance with a spectacular display of his own. Going 19-for-29 from the field, Carter’s 50 points led the Raptors to a 102-78 rout to take back the series lead. But the Raptors failed to put the Sixers on the brink in Game 4, unable to overturn a 13-point deficit after a sloppy first half, falling 84-79. Sensing newfound life, Philadelphia returned home to put a hurting on the Raptors in Game 5. Iverson once again hit the 50-point plateau, this time with 52, as the Sixers ran away with things in a 121-88 laugher.

Facing elimination for the third time that postseason, the Raptors answered the challenge in the same fashion they did on the prior two occasions, but not before a scare. Jumping out quickly, the Raptors headed to the half with a 15-point lead and nearly gave all of it back in a sluggish third that saw the Sixers outscore them by 14. But turning on the jets again in the fourth ensured a Game 7 with the Raptors emerging with a 101-89 victory, led by Carter’s 39.

So that takes us to Game 7 and that late afternoon of bad memories for Raptors fans. Why is the time important? Well, the game started at 5:30 p.m. ET and May 20 wasn’t just Game 7 of the Eastern Conference semi-finals – it was also the University of North Carolina graduation ceremony in Chapel Hill.

While Carter left UNC four springs earlier upon getting drafted after his junior year, Carter continued his studies following a promise to his mother that he would graduate from college. Due to be part of the Class of 2001, Carter flew down to the ceremony on the morning of Game 7 and then flew back to Philadelphia in time for the game. Alright, keep all of that in mind as we move on to the game.

There was no urgency to start Game 7 for the Raptors and it showed. The Sixers took a 10-point lead through one and an eight-point edge at the half. But the Raptors would claw back and make it a one-point game heading into the final frame.

Flash-forward to the final possession of the game. The Sixers lead 88-87.  Toronto has the ball with the chance to win the series coming out of a timeout. Carter stands on the far side of the key with Aaron McKie draped all over him. Dumping McKie into Charles Oakley’s screen, Carter takes off through the key towards the sideline where Curry is inbounding the ball, pursued by Tyrone Hill. Curry inbounds to Carter, who immediately shakes off Hill with a pump fake. From just inside the three-point line, Carter gets off an off-balance, but uncontested shot for win. It clanks off the rim and the Sixers advance to the Eastern Conference finals where they would defeat the Milwaukee Bucks in seven games to reach their first NBA Finals since 1983. There, they would fall to the Los Angeles Lakers in five games.

The impact of Carter’s choice to attend his graduation likely had no bearing on the actual result of the game, but the optics of the trip were undoubtedly bad – in the immediate aftermath of the game, a less-than-full-throated defence of his decision came from teammates.

"I'm not the right person to answer that," Raptors guard Chris Childs said in the locker room when asked if Carter’s travel affected his play.

For the Raptors and their fans, that Game 7 would lead to nearly two decades of what-ifs and undoubtedly helped to exacerbate what would ultimately become irreparable damage between Carter and the team.

Less than three years later, Carter would force his way out from the Raptors in what was one of the most acrimonious breakups between a star player and his team in NBA history. The wounds from it were so deep that only in the past few years has Carter been once again warmly received by the Raptors faithful after seasons of visceral anger.

Now back in 2019, beating the Sixers in the playoffs wouldn’t erase the hurt of the past, but it could go a long way in helping to right past wrongs. Who knows? Maybe this series would end up going seven games, too. Hell, maybe in this Game 7, the ball would end up in the hands of the Raptors’ best player with a chance to win the series at the buzzer, too, and this time it would actually go in.

Unlikely, I know, but could you imagine?

Jack Armstrong: “Resounding victory. Defence once again was excellent, holding a very good team to 95 points and below 40%. Kawhi and Pascal totally dominant combining for 74 points. That’s how you set the tone to start a series!"

Josh Lewenberg: “Depth wasn’t a strength for either team, so the Raptors-Sixers series was always going to come down to whose stars would shine the brightest. In Game 1, it was Toronto’s. Leonard and Siakam combined for 74 points (69% of the team’s total offence) and Gasol was instrumental in shutting down Embiid (who may have been sick or injured or both). RIP Game 1 curse."

Kia Nurse: “Well, here we go! You have to be excited, it’s the Eastern Conference Semifinals, Raps have home court advantage and there is no LeBron James in the near or distant future. On this day, the 76ers say hello to a man on a mission: Playoff Kawhi. Can you win a playoff game with only two players reaching double figures? With the KLaw and Spicy P, anything is possible.”

Kate Beirness: “Spoiler Alert… A game 1 victory, YAY! I remember thinking that this performance was so dominant that the series would be a sweep… and as we all know I couldn’t have been more wrong!”

Rod Black: “2001 Redux, the Rematch: 6'ers vs. the 6.  Rocky vs. Lennox Lewis. Two heavyweights ready to rumble. The tale of the tape is simple: two great teams, too many great match-ups, so many great subplots. Have a feeling this could be a seven-game series and could come down to a final shot... :). But for now - from the opening bell, er, tip - Raps landed first punch and then Playoff Kawhi just kept punching - dude was unstoppable. Not sure this was a playoff game or a video game. Loved watching Superfan and the old Sixers “FanGuy” every time their team scored. Gotta get them in an octagon. In the end - a game Linda Blair would have liked. Game One Curse completely exorcised.”

Leo Rautins: “Kawhi Leonard was a flat-out monster in game 1 vs. the Sixers! Batman dropped a career playoff best 45 points, and his Robin - Pascal Siakam - notched 29, as the Raptors dominated the opener! Sixers coach Brett Brown raved about Kawhi, but also said 'We’re not going away' - boy, was he right! Who said Game 1s were hard?”

Kayla Grey: “A playoff-high 45 points, 11 boards — where were you when you started to believe Kawhi would actually stay in Toronto? This was that game for me. Not only did this game reiterate the impact an elite two-way player could give you, but it also peaked the interest of what Pascal Siakam could become. Then there was Joel Embiid... or if you ask Marc Gasol, 'Who?'”