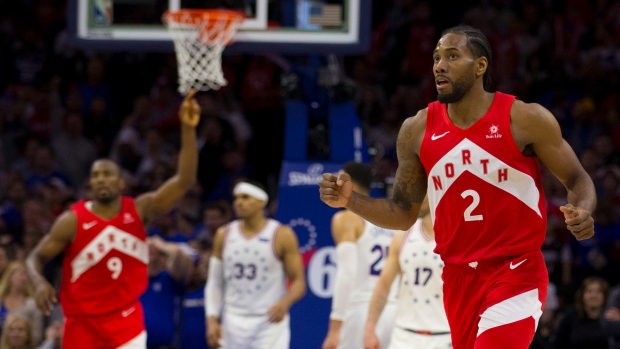 With the National Basketball Association on hold for the foreseeable future, TSN and Sportsnet are airing the entirety of the Toronto Raptors’ playoff run to the 2019 NBA title. You can watch Game 4 of the Eastern Conference semi-finals against the Philadelphia 76ers on Saturday night on TSN4/5, TSN.ca, the TSN App and TSN Direct.

As he did in the first two games of the semi-finals, Kawhi Leonard made his presence felt when the series shifted to the City of Brotherly Love.

After kicking off the series in Game 1 with a career playoff-high 45 points, and a 35-point night in Game 2, Leonard dropped 33 points in Game 3.

But as was the case in the previous game, Leonard didn’t get much help from his teammates as the Toronto Raptors fell to the Philadelphia 76ers 116-95.

It was their most lopsided game and in an alarming note, showed how different the Raptors were without Leonard.

In the third quarter, the Raptors clawed down the Sixers’ lead to seven points. In the two-and-a-half minutes Leonard took a breather on the bench, the Sixers increased the lead to 16 points and the game was all but over.

Joel Embiid had his biggest game of the series by putting up 33 points and 10 rebounds. He played to the hometown crowd down the stretch by putting his ear to his hand after a one-hand dock. He also put his hands together in a rocking-the-baby motion.

"I need it. When I have fun, my game just changes," Embiid said. "I'm always told that if I don't smile during the game that I'm either having a bad game or I'm not into it. I know that to get my game going, I have to have fun on the court. At the same time I got to make plays, but that part of the theatrics, it has to happen for me.

"The game is more fun that way. You can see it lifts my teammates and we all do a good job."

The Sixers lead the Raptors 2-1 in the best-of-seven series and can take a stranglehold with another win at home in Game 4. Will Embiid give the fans something to cheer about or will the Raptors come together to help support Kawhi and even up the series?