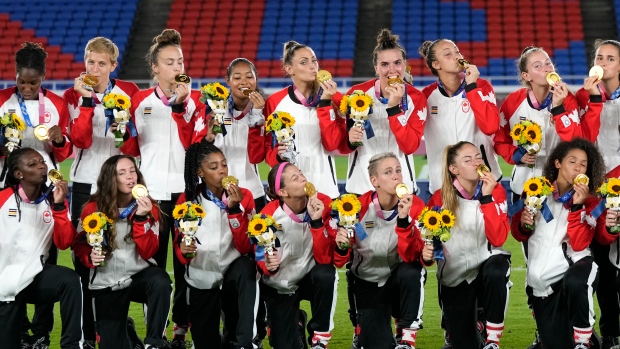 “Change the colour of the medal.”

That was the mantra that Bev Priestman, head coach of Canada’s women’s soccer team, drilled into her players before the Tokyo Olympics. The team had earned back-to-back bronze medals in the 2012 and 2016 Games.

“We were obviously sick of two bronze medals,” goalkeeper Stephanie Labbé told TSN last month. “We wanted to be better than that.”

The Canadians stood on top of the podium after defeating Sweden in penalties in the gold-medal match. It was an unprecedented win for Canadian soccer and represented a shift in the landscape of the women’s game. For the first time, Canada had won a major tournament.

“I'll tell you that there's no greater feeling than standing on the top of the podium with your best friends, with the people that you experience all the joys and all the lows this sport brings you,” captain Christine Sinclair told the media in August. “Standing up there, listening to the Canadian national anthem – it's a moment I'll never forget.”

Neither will the millions of Canadians (4.4, to be exact) who watched the historic game on a Friday morning. Players beyond the legendary Sinclair became household names.

Labbé earned the moniker of “Canada’s Minster of Defence” after her incredible performance during penalty kicks in both the quarter-final and gold-medal match. Her smile to opposing players during penalties with gold on the line circulated widely on social media.

While part of it was a tactical approach to throw off her opponents, it was also an organic expression.

“There's for sure a piece where I want to send a message to the Swedes. I hope that at least one of them looked at me and was like, ‘Oh, s***, she's happy,’” she said. “But I was just wanting to smile. I think it's funny, but I'm like, ‘Everyone's so damn serious. Have fun.’”

That team had numerous other standouts. Jessie Fleming was the definition of clutch in Tokyo, converting from the penalty spot four times, including twice in the gold-medal match. Quinn became the first openly transgender and non-binary athlete to earn a medal at the Olympics. Julia Grosso scored the winning penalty just weeks before her 21st birthday.

While the individual accomplishments could be highlighted for all 22 members who were on the Olympic roster, the players always bring it back to one focus: the team.

“I think it goes without saying that culture is definitely our X-factor,” forward Janine Beckie told TSN in August. “And our relationships off the field – I think we did the best job we ever have of bringing them onto the field and having that camaraderie and the connection on the pitch like we do off.”

Sinclair said her favourite memories from Tokyo, besides the obvious, are the little moments that the cameras never caught, like the team killing time by playing cards or Wink Murder, or the now-infamous Mario Kart tournament that defender Vanessa Gilles won.

“I think a lot of teams say that they're a close-knit team. We truly are. These are some of my best friends and they have been for years. We've been through a lot together,” said Sinclair.

This tight-knit group was brought together under the leadership Priestman, who was in her new role as head coach for less than a year before embarking on the Olympics. Now the 35-year-old (almost three years younger than Sinclair) has led her team to gold.

“All Bev asked of us was that each player just do their part,” said Sinclair. “She knew that we had the components to go far in this tournament, and everyone just needed to do their jobs.”

“I'd say she almost created an unstable environment in the that she shook things up,” Labbé said. “She changed some things up that I think made players less comfortable, and I think that pushed players in different ways and brought something out of us that maybe we didn't know we had inside of us.”

After she was hired in Oct. 2020, Priestman spoke repeatedly about how she wanted her players to “be brave,” and it’s a refrain she continues to use.

“I feel very, very privileged to call myself an Olympic gold medalist coach because there's a whole team behind me. There's a whole group of people that came before me,” Priestman told the media in August. “But what it does reiterate is that you have to trust your gut. You have to believe. You have to be brave.”

The aftershock of that gold medal continues to be felt in women’s soccer, where Canada typically isn’t recognized internationally. While articles previewing the Olympics asked if the Tokyo Games were too easy for the Americans (who Canada defeated in the semifinals), very few mentioned Canada as podium contenders.

“I don't think that we still have the respect that we deserve, which is unfortunate, because for the last decade we have been up there with the best of them,” Beckie said in August.

“I still don't think our national team is as well respected on the international stage yet,” said Labbé. “I think it is getting there, and I think this year has been a major step forward. But I think in order for that to continue to happen, I think this team has to get a result at a World Cup and I think we'll continue to see more and more Canadians on those lists.”

Beyond the nominations, Canada’s Olympians have thrived away from the national team. Labbé signed with top club Paris Saint-Germain shortly after winning gold. She also opened up about the toll the Olympics took on her mental health, as she suffered from repeated panic attacks and had difficulties processing the achievement of winning gold.

“I don't think I've fully recovered from that experience,” she said. “But I do know I'm able to talk about it and look back and really feel the sense of pride and joy and a sense of excitement. It took me a month to be able to even talk about the Olympics. But the more and more I talk about it, the more I'm reminded of all the positive memories and the really amazing thing that we've achieved as a team.”

Labbé, along with Lawrence (who also plays for PSG), Sinclair, Buchanan, Fleming and Gilles were all named to The Guardian’s list of the top 100 female footballers in the world. The six Canadians are the most to be included on the list since The Guardian debuted it in 2016.

Fleming in particular has blossomed with Chelsea this season. She has four goals, including a marker in Champions League, and was named November’s Player of the Month for the Women’s Super League. She also recently won the FA Cup, playing all 90 minutes in the final against Arsenal.

When looking at Canada’s next generation, both Grosso and Gabrielle Carle also ended their years on high notes: Carle won her second NCAA Championship with Florida State before signing with Swedish club Kristianstads DFF, and Grosso inked a deal with Juventus earlier this month.

But the players continuously bring it back to issues bigger than themselves. Before the team’s first game in the Celebration Tour in October, the players sent a letter to Canada Soccer with a list of demands, which included an independent investigation into Bob Birarda, the former Vancouver Whitecaps and U20 national women’s coach who is facing nine sex-related charges in British Columbia.

“Our voice carries a unique weight right now. We want to make the most of it,” Sinclair said after Canada’s 5-1 win over New Zealand.

“I think there's a great core of players that are driving change, and that are driving positive conversations, in terms of Black Lives Matter, using proper pronouns, gender expression,” said Labbé. “We as a team have really taken the initiative to go towards hard conversations and creating a really safe, respectful environment for everybody, no matter who they are.”

Canada Soccer agreed to all of the demands and announced last month that it had engaged McLaren Global Sport Solutions to investigate the circumstances surrounding Birarda’s departure.

The Canadian players are also using their voice to advocate for a domestic professional women’s league. Canada, currently ranked sixth in the world, remains the only top-10 team to not have its own women’s professional league.

On the men’s side, there is the Canadian Premier League, which recently finished its third season, and three teams (Toronto, Montreal, and Vancouver) compete in Major League Soccer.

“It’s time for that to change,” said Sinclair. “We’re hoping that this platform will give us the opportunity to start that change… The youngsters, they deserve to be able to go watch their heroes on a week-to-week basis and not just once every four years.”

“We spoke about writing the next chapter of the women's game here in Canada, and how this group getting gold can do that,” Priestman said. “Probably what jumped out to me is I just feel the love for this team, and what this country can do now to support our pathway, to put this group of players and more on Canadian soil regularly, rather than maybe once every four years – it just feels like the time is right.”

Earlier this month, Women’s Premier Soccer League (WPSL) Canada was announced as a new, semi-professional league in the country. While the WPSL Canada has stated its goal is to eventually create a professional division, several players have pointed out that soccer in Canada needs to aim higher.

“Not the PROFESSIONAL league Canada wants or NEEDS,” Labbé tweeted in response to a video posted by the WPSL Canada showing several national team players.

“Imagine asking any of the players in this video to come home to Canada to play in a league which is:

It has its place… but this is not what we are fighting for.”

Not the PROFESSIONAL league Canada wants or NEEDS.

I hope I am wrong, but this “hype” video is showcasing professional Olympic Gold Medalists. They need a professional not amateur league. https://t.co/Rzafxba5SS pic.twitter.com/1gIYeVxZoQ

Imagine asking any of the players in this video to come home to Canada to play in a league which is:

It has its place… but this is not what we are fighting for. https://t.co/Rzafxba5SS

While the battle continues to establish a domestic league, the Canadian national team flips the calendar to 2022. They are set to begin the year in England in a four nations tournament featuring three of the best teams in the world: the host Lionesses, Germany, and Spain.

The team will then shift its attention to World Cup qualifying in the form of the 2022 CONCACAF Women’s Championship final round in July. Canada hasn’t made it past the quarter-finals of a World Cup since 2003.

“There's that old saying, there's actually a book on it – there’s no hunger in paradise,” said Priestman. “What I definitely want to ensure is that this gold medal wasn't just a one-off that we did once and we all rode away in the sunset, and we're happy with that. We’ve got to push the players more than ever now.”

For the players, there’s no sense of complacency now that they’ve reached the top of the podium.

“I think what the new challenge for this team will be now that we have that number one spot, we are considered the current world champions, so what are we going to do with that, now that we have that title?” said Beckie. “And thankfully, I don't think it'll change much for us, because that's just our group. We're hungry for more and we want to win the World Cup and we want to get back on the podium in 2024 [Olympics].”