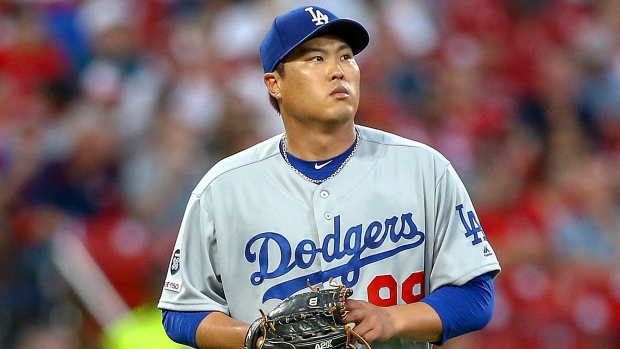 For the price of one top-of-the-rotation starter, Ross Atkins also bought a change in perception.

Seen from the outside as a front office regime brought in to keep costs controlled and, potentially, stumble into contention every once in a while, wins were few and far between for Atkins and the Toronto Blue Jays through his first four years on the job – both on the field and in the public eye.

After a couple of quiet, cost-cutting off-seasons, stories of the Blue Jays being aggressive in free agency from the outset this winter were met with eye rolls and a more than fair wait-and-see attitude.

That all changed late Sunday night when the Jays and left-handed starter Hyun-Jin Ryu, one of the premier arms on the free-agent market, agreed to terms on a four-year, $80-million deal, a source confirmed.

One important detail in the contract is it does not contain any opt-outs, per sources, and there is a limited no-trade clause as well.

It’s by far the largest investment Atkins has made in a player, surpassing the three-year, $33-million deal he handed Kendrys Morales in the winter of 2016, and it’s also the second-largest total value free-agent contract in franchise history, just behind the $82.5 million deal Russell Martin signed in 2014.

When it comes to pitchers, it’s reminiscent of the contract J.P. Ricciardi used to lure A.J. Burnett to Toronto way back in December 2005, a five-year, $55-million pact.

That Burnett deal could be used as a comparison in a different way, too, as Ryu comes with similar health risks, making it a move that has the Atkins regime ready to shed its label as a risk-adverse front office.

As I wrote here on the final day of the winter meetings in San Diego earlier this month when it became very apparent Ryu was not only the apple of Atkins’ eye but also their best chance to land one of the upper-tier options on the pitching market, the Blue Jays had to go all-in.

The expected $20 million per year floor came to fruition, and it’s likely that the fourth year tacked on, one that will take Ryu through his age-36 season in 2023, was instrumental in getting the South Korean lefty to choose an American League East destination not named New York or Boston over a pair of rotation-needy Los Angeles clubs.

Ryu represented Atkins’ best chance to get a top-of-the-rotation starter for nothing but money, something that seemed like a pipe dream for many just a few short weeks ago.

Coming off a second-place finish in the National League Cy Young race and a 2.32 ERA, Ryu is inarguably exactly what the Blue Jays needed – an impact starter.

But his resume, however, is littered with health issues — Ryu has landed on the IL nine different times in six years with shoulder (twice), hip (twice), groin (twice), elbow, foot and neck injuries – leaving a whole lot of risk involved with a four-year commitment to a pitcher in his mid-30s.

Since arriving in the majors with the Dodgers in 2013, Ryu has thrown more than 150 innings just three times.

With that being said, the timing was right for this type of risk in a number of ways.

Not only does it show a beaten-down fan base that everything they believed about this regime’s philosophy going forward was false, it also kicks the plan to be a legit contender by 2021 into overdrive.

There’s no doubt adding Ryu, along with veteran right-handers Tanner Roark and Chase Anderson, makes the Blue Jays a better team in 2020, but it’s more about surrounding the young position player core with a couple more building blocks now, before adding a handful more next winter.

Had Atkins not been able to add an arm like Ryu now, it would have simply left more work to do in the future and the clock ticking on Vladimir Guerrero Jr., Bo Bichette and Cavan Biggio’s cheap, pre-arbitration years.

You can’t build a rotation or a ball club in one off-season.

When 2021 arrives, the Jays envision a rotation headed by Ryu and Nate Pearson, followed by 2020 off-season addition X, Roark, and they’ll cross their fingers and hope one or two of the other internal options they’ve collected over the past couple of years can prove they’re capable of being part of the plan.

Where things go from here will be interesting.

Ryu could be the cherry on top of what now looks a successful off-season, or it could be just the start.

Rumours the Jays have checked in on David Price are legit, but the Boston Red Sox will have to pay around half of the $96 million he’s owed over the next three seasons or it’s not happening.

An upgrade is also desperately needed in centre field, while the bullpen now becomes a focus. Suddenly, a Ken Giles trade doesn’t seem as likely as it once did.

By no means is this team anything more than an everything-went-right wild-card contender in 2020 as the roster currently stands, but there’s now no mistaking what this front office is up to and their desire to win.

A player development machine with more than enough financial resources to keep players around and make free-agent splashes when the time is right is what the Blue Jays want to become, and we’re finally starting to see the two converge.