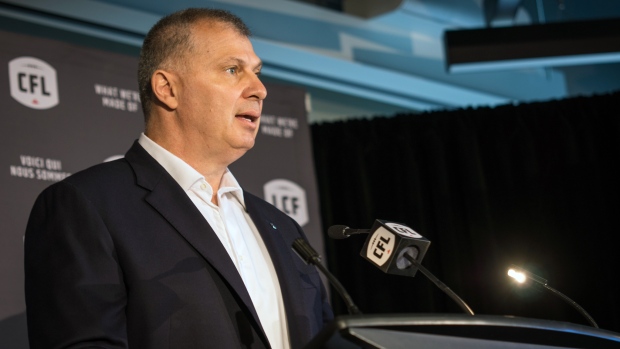 The Canadian Football League and the CFL Players’ Association will sit down next week to formally begin collective bargaining on a new agreement to replace the current five-year deal that expires on May 15 – the same day training camps are slated to open.

If history is any sort of indication, there will be bumps along the way but a deal will get done. The CFL hasn’t had a work stoppage since 1974.

But there are some dynamics that make this time around a little different.

For one, the negotiations come as the league has begun pursuing an aggressive international strategy that figures to significantly change the composition of the league’s rosters.

It’s also the first go-around for commissioner Randy Ambrosie, a former player and former secretary of the union. Ambrosie can identify with the players, but he’s also a shrewd businessman who doesn’t make decisions based on what’s been done on the past.

There have been no sacred cows in Ambrosie’s CFL and he doesn’t figure to bring any with him to the negotiating table.

It’s also the first trip to the bargaining table for the CFLPA executive director Brian Ramsay, a 39-year-old former offensive lineman who was still playing the last time the CBA got done.

The league’s negotiating team will be led once again by Toronto lawyer Stephen Shamie, who oversaw the negotiation of the last deal in 2014. The players are countering with a heavyweight in Ken Georgetti, the former president of the Canadian Labour Congress who is a seasoned labour negotiator and member of the Order of Canada.

The sides are expected to agree to a news blackout when bargaining begins, but that will inevitably be broken weeks from now as frustration mounts on one or both sides.

Based on what we’ve heard from both sides in recent years and months, these are some of the key issues expected to come up at the bargaining table:

It’s not a sexy issue to the fans, but complete rehabilitation for injuries suffered on the field has been the No. 1 rallying cry of the players leading into these negotiations.

Football is a risky profession and the union considers it unconscionable that the CFL is off the hook financially one year from the date of any injury suffered.

Workers compensation for athletes is mandatory in the U.S., but isn’t in Canada, which is why the players have made so much noise about this issue over the last few seasons.

The players now have one vote of 12 on the rules committee, where changes are often made in the name of health and safety.

The players want a bigger voice at the rules committee table to turn issues raised at the health and safety committee into changes that improve the safety of the game.​

The CFL currently has a salary cap of $5.2 million per team, although teams actually spend significantly more than that because of injured players whose salaries are cap-exempt.

The cap was increased by $50,000 for each year during the soon-to-expire CBA. While some teams are making money (balance sheets for Saskatchewan, Winnipeg and Edmonton are all public), others like B.C., Montreal and Toronto are believed to be losing significant amounts.

With the league’s overall revenues believed to be static, there won’t be much appetite among the owners to spend more on salaries.

The CFL had roughly 200 players hit the open market on Feb. 12. That made for an exciting day of headlines, but the league has consistently received feedback from fans saying there is too much player turnover.

With no form of restricted free agency, rookies can be free in as little as two seasons, while more and more veteran players are choosing to sign one-year contracts to keep their options open.

The league’s general managers share the view that the CFL has too much player turnover and would welcome a more restricted system of free agency. But the players aren’t likely to give up their freedom of movement without getting something back. That figures to be a demand that at least some portion of their contracts be guaranteed, so that teams can't just cut a player with years remaining on his contract for nothing.

That leads us to the subject of…

The only money currently guaranteed to CFL players at the start of a season is what they received in a signing bonus.

Some veteran salaries become guaranteed for the remainder of the season once the schedule moves past Labour Day, but even a player who signs a four-year contract has no guarantee that anything will be paid beyond the first season.

If the league wants to players to give up one-year deals, it makes sense that the players will ask for some percentage of additional years on a contract to be guaranteed.

The players have noticed how aggressively Ambrosie is pursuing his international vision for the CFL, which he is calling CFL 2.0.

In recent weeks and months, Ambrosie has been to Mexico and made several stops in Europe, hatching partnerships with foreign football federations which he hopes will open up revenue opportunities for the CFL down the road.

Though the players have been briefed on Ambrosie’s vision, they’ve had no input. That raises questions about where international players will fit on CFL rosters. Are they competing with Canadians? Or will they have their own prescribed number of spots on a roster?

The league’s vision is clear: get international players on CFL rosters to generate interest outside of Canada for foreign broadcast revenues.

Figuring out how that happens could be the most intriguing part of this CBA.

The CFL’s minimum salary is currently $54,000, which, with current exchange rates, translates into $40,463.38 (U.S.). Throw in taxes and the expenses of living in a different country and there’s not a lot to lure American players to the CFL beyond the opportunity to play.

It’s believed the league would like to lessen the gap between the CFL minimum and the minimum being offered by the Alliance of American Football ($70,000 U.S.). But unless the salary cap is going to rise substantially, any significant increase to the minimum salary would have to come at the expense of current players. That could be a hard sell to the membership.

If the CFL’s dream of an Atlantic Canadian franchise comes true, the league will need 21 more Canadian players – seven of whom are good enough to start - unless the league changes the ratio.

Will the league try to reduce the number of Canadians or Canadian starters, regardless of whether Halifax comes aboard? Or perhaps it will change the way the ratio is applied, requiring a minimum number of Canadians playing on each side of the ball.

It’s an age-old issue that is ready for a fresh approach.

Ambrosie has voiced his support for a solution that would find a way to recognize a Canadian quarterback as a Canadian.

There’s an easy solution: Any Canadian actually playing quarterback in a game should count as one of the game’s seven ‘starting Canadians.’ However, a Canadian backup quarterback shouldn’t qualify as a Canadian, preventing teams from signing one just to fulfill the ratio requirement.

With legit Canadian quarterback prospects on the way, it’s a perfect time to solve this problem.