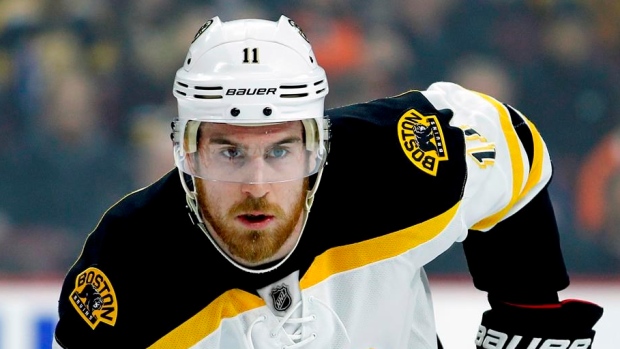 Len Boogaard felt sorrow and anger when he learned Sunday that former National Hockey League player Jimmy Hayes struggled with an addiction to painkillers before he died in August with fentanyl and cocaine in his system.

It has been 10 years since Boogaard buried his son, Derek, a former NHL enforcer who died in May 2011. Derek died from mixing alcohol and the powerful painkiller oxycodone.

“There isn’t a day that goes by that I don’t think about Derek, about the quirky smile he had where he’d just sit and look at you and then laugh,” Boogaard said in an interview with TSN.

It was with Derek’s memory in the back of his mind that Boogaard said he read a Boston Globe column by Dan Shaughnessy on Sunday that quoted Jimmy Hayes’ father, Kevin, saying that he had confronted his son about his dependence on pain meds last year.

“I went to him, and I said, ‘I think there might be a problem here with pills’,” Hayes told Shaughnessy. “He had had an injury for a while, and I think he started taking the painkillers and they get you… He called me three weeks later and said, ‘Dad, I’m hooked on these pills. I got injured and I started taking them and I never got off.’ And I said, ‘Well, let’s get you some help.’ He went to a place up in Haverhill (MA). So, he gets help and everything was on the path to recovery I thought. But this [expletive] is so powerful.’’

Jimmy Hayes was raised in Dorchester, a Boston neighbourhood, won an NCAA championship playing for Boston College in 2010, and went on to play for the Bruins after being drafted by the Toronto Maple Leafs in the second round of the 2008 NHL entry draft. He played seven NHL seasons for Chicago, Florida, Boston and New Jersey, scoring 54 goals in 334 games. He last played professionally in the American Hockey League in 2019.

Jimmy began regularly using painkillers early on in his NHL career, said a person familiar with the matter.

In a six-year NHL career before his death in 2011, Derek suffered numerous concussions, was sent to drug rehabilitation twice and was given copious amounts of medication. During his final two years in the NHL, doctors with seven teams gave him 13 Toradol injections. During the 2008-09 season alone, he was prescribed 1,021 pills from roughly a dozen different doctors, according to his medical records.

“How many players have to die before the NHL acknowledges that there’s a problem?” Boogaard said. “Ten years ago, with Derek, I maintained that it was a learning experience for everybody, so that Derek didn’t die in vain. Well, we continue to just go through the same thing. After me it was Steve Montador’s dad. And now it’s Jimmy’s dad saying he wants to bring this to everyone’s attention, so it doesn’t happen to everyone else. I guess it’s going to take more players dying, maybe three or four back-to-back again, or maybe more, for the NHL to do something.

“Maybe it has to happen again, God forbid. I know it sounds so callous...”

Derek Boogaard, Rick Rypien and Wade Belak died over the span of several months during the spring and summer of 2011. And while the moment seemed like the time for the NHL to reflect on fighting in the game, brain injuries and the use of painkillers by players, Boogaard said any discussion of those subjects by the NHL was purely superficial.

“Right off the hop, the NHL pointed the finger at Derek and said he did this to himself,” Boogaard said. “There was no interest in the NHL in knowing the truth. In fact, the NHL and its teams and doctors did everything they could to stop me from getting to the truth. …All I wanted was to get to the truth about what had happened with my son.”

Boogaard said he learned about the circumstance of  Jimmy Hayes’ death via an email from Steve Montador’s father, Paul.

Steve Montador was 35 when he died on Feb. 15, 2015. Paul alleges that his son suffered at least 11 documented concussions in the NHL, including four in 12 weeks in 2012. In August, a U.S. federal court judge ruled that Paul could pursue a wrongful death lawsuit against the NHL in state court in Illinois over his claim that the league has allegedly misrepresented the dangers of repeated brain injuries while promoting and profiting off a culture of violence. He has yet to file a subsequent claim.

Boogaard also filed a wrongful death lawsuit against the NHL. That case made its way through appeals to the U.S. Supreme Court before it was dismissed in December 2018. A lower court judge had ruled that a wrongful death and survivor lawsuit should have been filed by a court-appointed trustee, not Derek's parents.

Boogaard said he doesn’t regret facing down the NHL, and he said he hopes Kevin Hayes also demands accountability and details from the league about his own son’s death.

“My fight in some respects brought awareness to what is going on,” Boogaard said. “The league has not gotten away with this scot-free. There has been a public relations cost. And for Jimmy’s father, just don’t let it go. Keep being vocal. Keep advocating for your son. Keep calling the NHL out. This is not an easy road.”

“I encountered hurdle after hurdle, roadblock after roadblock,” he said. “In the end we got what we needed to show what was going on, to prove what happened with Derek.”

Boogaard said Derek’s medical records established that he faced no fines, sanctions or other penalties after he repeatedly violated the terms of an agreement he signed after being released in 2010 from a drug and alcohol rehabilitation facility, and that his repeated violations included testing positive for opiate and stimulant drugs, admitting to making illegal purchases of narcotics, and for missing randomly scheduled drug tests.

The issue of painkillers has remained topical in the NHL.

In December 2020 in the TSN documentary "The Problem of Pain," former NHL players Ryan Kesler, Kyle Quincey and Zenon Konopka said that they regularly were given painkillers and the anti-inflammatory drug Toradol during their playing careers by team doctors and trainers. The three players said they were never told about the potential long-term consequences of repeated use.

In the same story, 17 NHL players told TSN that they had used Toradol for more than five days in a row, which is the recommended maximum.

Still, NHL and NHLPA officials alike have said that the sides have strengthened their drug testing program during the 10 years since Derek’s death.

In 2016, the NHL and NHLPA agreed for the first time to screen the samples of all drug-tested players for recreational drugs because of concerns over a rise in players testing positive for cocaine.

“The program is much better now than it was 10 years ago?” Boogaard said. “Tell that to the Hayes family.”