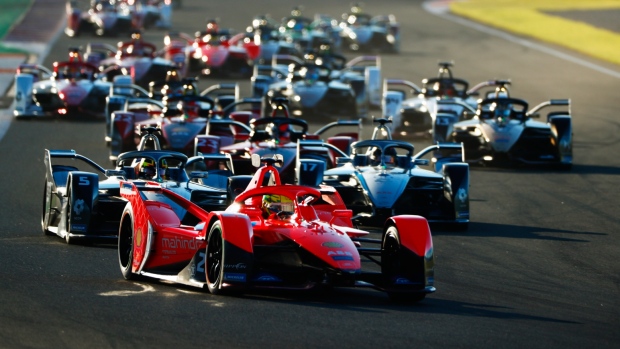 The ABB FIA Formula E World Championship lands at Berlin’s Tempelhof Airport Circuit for Rounds 7 & 8 of the 2021/22 campaign on May 14 and May 15.

The 2022 Shell Recharge Berlin E-Prix will see Formula E return to the German capital, a fixture on the calendar since the inaugural 2014-15 season. Uniquely, the 22 drivers from 11 teams race in Berlin in both anti-clockwise and clockwise variations of the circuit in the double-header race weekend.

As it stands, just 10 points split Drivers’ World Championship leader Stoffel Vandoorne (Mercedes-EQ), Jean-Eric Vergne (DS TECHEETAH), Mitch Evans (Jaguar TCS Racing) and Robin Frijns (Envision Racing). With 29 points on offer each day, there will be plenty of twists and turns before the checkered flag falls on Round 8.

Saturday’s action in the 2022 Shell Recharge Berlin E-Prix gets underway with Free Practice from 7:15am et, with qualifying at 10:40am et and Round 7 itself from 3pm et.

Free Practice ahead of Round 8 starts at the same time on Sunday, with qualifying also following at 10:40am et and the race once again at 3pm et.

Last time out, Vandoorne (Mercedes-EQ) wrestled control of the Drivers’ World Championship after claiming victory in the Monaco E-Prix. The Belgian fended off the attentions of Jaguar TCS Racing’s Mitch Evans, with the Kiwi unable to convert his Julius Baer Pole Position winding up second, and DS TECHEETAH’s Jean-Eric Vergne who came home third. Vandoorne has won twice around Tempelhof and he’ll undoubtedly be the driver with the target on his back this weekend.

Monaco saw consecutive podium finishes for Vergne after his second-placed finish in Rome’s Round 5. With consistency key in Formula E and even after losing the Drivers' advantage to Vandoorne for now, he knows he's sitting pretty just six points back.

Evans is three points shy of Vergne, while Robin Frijns (Envision Racing) is stringing together a charge another point behind in fourth spot. The Dutchman has scored strongly in all but the opening race of the season, and his three podiums are as good as any other driver in the standings has yet to manage.

The TAG Heuer Porsche Formula E Team pairing of André Lotterer and Pascal Wehrlein have shown pace so far this season and will be looking to bounce back after neither car finished the race in Monaco. Ahead of the race, Porsche reserve driver Simona De Silvestro took the Formula E Gen2 car on a spin through downtown Berlin passing iconic sites including the Brandenburg Gate and Alexanderplatz.

Berlin is the only city to have hosted a race in every season of Formula E and in all but one of those seasons the expansive Tempelhofer Feld has been the host venue, one of the largest inner-city parks in the world.

The 2.4km Tempelhof Airport Street Circuit will host two different configurations over the weekend with Saturday’s race using the traditional anti-clockwise direction and Sunday switching to clockwise. It’s a unique challenge for the teams and drivers, but one they relish – and a favourite of many. The bumpy concrete apron, higher than usual degradation and high grip takes a toll on energy management and makes race strategies a headache but the action is always among the best on the calendar.In the last race of 2020/21 as Mercedes secured the Teams’ World Championship alongside teammate Nyck de Vries’ Drivers’ title the last time Formula E visited.

Tune-in to the Berlin E-Prix on TSN.