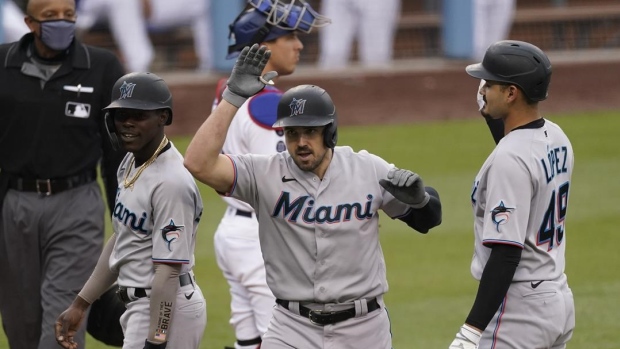 LOS ANGELES (AP) — Adam Duvall hit a three-run homer and then threw out Mookie Betts at the plate during a busy fifth inning Sunday, and the Miami Marlins hung on for a 3-2 victory in their series finale with the Los Angeles Dodgers.

Pablo López gave up seven hits and two runs over five innings in his first victory of the season for the Marlins, who won for just the third time in nine games.

Miami got all of its offense from Duvall's second three-run homer in three days at Dodger Stadium. López and the Marlins' bullpen then barely held off a Dodgers lineup using several backups in the absence of a few key bats for the injury-riddled club.

Austin Barnes had an RBI double and Betts drove in another run during the second inning for the defending World Series champions, whose four-game winning streak ended with their first loss on a nine-game homestand.

Two former Dodgers relievers secured the victory for Miami. Dylan Floro threw a scoreless eighth, and Yimi Garcia pitched the ninth for his seventh save, getting Betts to ground out with a runner on first to end it.

The Dodgers put World Series MVP Corey Seager on the injured list before the game with a broken right hand. Seager became the 13th player sidelined for Los Angeles alongside the likes of Cody Bellinger, AJ Pollock, Zach McKinstry and Dustin May.

Duvall put the Marlins ahead with a two-out shot off inexperienced reliever Edwin Uceta (0-2) for three unearned runs in a rally that began with fill-in second baseman Sheldon Neuse's fielding error. Duvall also hit a three-run homer off Clayton Kershaw on Friday.

Duvall then threw out Betts at the plate rather comfortably from right field to end the fifth when Betts was curiously sent home from second on a short single by Matt Beaty. Betts attempted to hurdle Chad Wallach at the plate, but the catcher applied a vertical tag.

Gavin Lux took Seager's regular spot at shortstop, and Chris Taylor was slated to replace Lux at second base until Taylor was scratched moments before the first pitch with right wrist soreness, forcing Neuse to step in.

Neuse led off the second with a double and immediately scored on Barnes' double. Betts then drove in Barnes with a single.

Los Angeles got a pair of hits in the eighth off Floro, but he struck out Neuse to strand Beaty on third.

Jimmy Nelson opened a bullpen game for the Dodgers with 1 2/3 innings, and five relievers followed him. Only Uceta found any trouble, but he recovered and pitched three innings of four-hit ball in his fourth major league appearance, even retiring Duvall on a fly to end the seventh.

Marlins: SS Jazz Chisholm returned from a hamstring injury and went 2 for 5. He strained his hamstring nearly three weeks ago.

Dodgers: LHP David Price is likely to be activated Monday. He has been out since late April with a strained hamstring. ... C Keibert Ruiz took Seager's roster spot.

Marlins: After a cross-country flight and a day off, Miami opens a three-game series Tuesday at Philadelphia. The Marlins haven't announced a starter.

Dodgers: Walker Buehler (1-0, 3.45 ERA) returns to the mound in Chavez Ravine when LA opens a four-game series with Arizona. Buehler has gone at least six innings in every start this season.