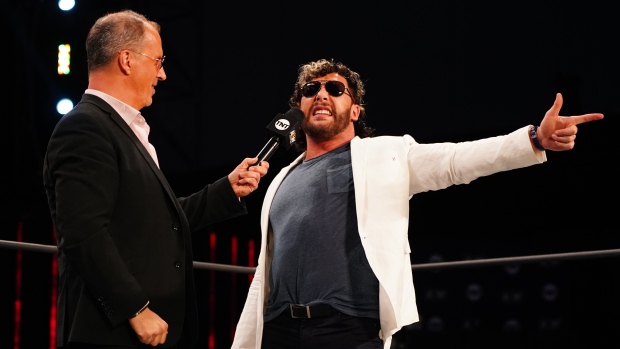 "The Cleaner" Kenny Omega puts his AEW World Championship on the line against Jungle Boy in the biggest match of Jack Perry's young career. Plus, "Hangman" Adam Page meets Powerhouse Hobbs and Konnan makes an appearance. You can catch AEW Dynamite LIVE on Saturday, June 26 at 8pm et/5pm pt on TSN2, the TSN app, streaming on TSN Direct and on TSN.ca.

AEW World Championship match: "The Cleaner" Kenny Omega (c) (w/ Don Callis and Michael Nakazawa) vs. Jungle Boy (w/ Luchasaurus and Marko Stunt): Jack Perry is still only 24 years old and on Saturday night, he takes on the biggest challenge of his young career. By virtue of winning the Casino Battle Royale at Double or Nothing last month, Jungle Boy earned a shot at Kenny Omega's AEW World Championship and he gets that match on Saturday night. Omega and Perry have met twice before (with Jungle Boy coming out on the losing end), but never in one-on-one competition. Heading into the match, Omega has been dismissive of Perry as a challenger, but also seemingly wary of him, attacking him on two occasions. Jungle Boy enters the match on a five-match winning streak in singles competition since being defeated by Darby Allin for the TNT Championship on the April 21 edition of Dynamite. For Omega, the match is his fifth title defence since capturing the belt from Jon Moxley last December and the first since defeating both Orange Cassidy and PAC at Double or Nothing. Can Jungle Boy pull off the biggest win of his career or will "The Belt Collector" continue his reign atop the AEW singles ranks?

"Hangman" Adam Page vs. Powerhouse Hobbs (w/ Team Taz): While Adam Page's feud with Team Taz hasn't come to an end, his enmity with the faction seems to have taken a backseat to the discord within it. A match against Page at Double or Nothing was the impetus for Team Taz's current fractured state. While taking on Page, whom he had defeated weeks earlier, Brian Cage refused to use the FTW Title - given to him by Ricky Starks - as a weapon. The ensuing argument between Cage and Starks allowed for Page to take advantage, hitting the Buckshot Lariat and getting the pinfall over "The Machine" to even their series. Then two weeks ago on Dynamite, in a tag match where Cage and Hobbs teamed up to take on Page and Preston "10" Vance, Starks slapped Cage, sending the big man into a rage. After Cage chased Starks to the back, Hobbs was left to take on both men alone, eating a Buckshot Lariat for his troubles and getting pinned by Vance. Last week, Hobbs challenged Page to meet him one on one and the Hangman obliged. Will Team Taz continue to crumble or will Hobbs enact a measure of revenge against Page?

Kris Statlander (w/ Orange Cassidy) vs. The Bunny (w/ The Blade): Statlander wrestles her third match on Dynamite since coming back from her lengthy absence due to a torn ACL. Since her return to AEW in April, Statlander is undefeated, going 8-0. In her last time out on Dynamite, she was a winner over Penelope Ford on Apr. 28. Her opponent on Saturday night is the Toronto-born Bunny who has a renewed focus on her own in-ring work, rather than her role as the Hardy Family Office valet. In her last match, the Bunny defeated Reka Tehaka on June 8's AEW Dark. With Statlander currently No. 4 in the AEW Rankings, a win by the Bunny could go a long way in climbing the ladder towards a title shot against AEW Women's World Champion Dr. Britt Baker, DMD. Can Statlander remain undefeated in 2021 on her way up the Rankings or can The Bunny manage an upset?

Matt Sydal vs. "El Angel Dorado" Dante Martin: It's a battle of the present versus the future when Matt Sydal meet Dante Martin on Saturday night and a battle of two of AEW's most impressive high flyers. Still only 21, Martin's venture into the singles ranks while Top Flight partner and brother Darius Martin is on the shelf with an ACL injury has been a bit of a mixed bag. Though Martin has reeled off a number of victories, he has yet to have a signature win, losing in his two most high-profiles matches - against Miro for the TNT Championship on the May 28 Dynamite and against Sydal on the June 8 AEW Dark. A victory over the veteran Sydal on Saturday night would not only be one of the biggest feathers in his cap in his young career, but it would show Martin to be capable of learning from his mistakes and improving since his last meeting with the former Impact X-Division Champion. Will Sydal make it two straight wins or can Martin even up the score?

"All Ego" Ethan Page (w/ Scorpio Sky) vs. Bear Bronson (w/ Bear Boulder): Stoney Creek, Ont.'s Page heads into Dynamite on a high. During last week's show, Page and Sky finally got the better of Darby Allin, defeating him in a two-on-one handicap match. It was Page who got the win for Men of the Year, putting Allin away with the Ego's Edge. The win over Allin made up for the one blemish on Page's AEW record, thus far - a loss to Allin and Sting at Double or Nothing. Moving on from the feud that has consumed much of Page's last several weeks, All Ego now meets a tag team specialist in Bronson. This will not be the first ever meeting between the two. On a 2019 A1 show in Hamilton, Page and longtime partner "The Walking Weapon" Josh Alexander (together known as The North) teamed up with Gregory Iron to defeat the team of Bear Country and Kobe Durst. Almost two years to the day, can Page defeat Bronson for a second time or will Bronson get his win back from All Ego?

- Two legends will come together in the ring when The Pinnacle's Tully Blanchard, manager of FTR (Dax Harwood and Cash Wheeler) meets face to face with Konnan, the mentor of Inner Circle's Proud-N-Powerful (Santana and Ortiz). Both Blanchard and K-Dogg are well known for their mic work, so sparks are sure to fly.