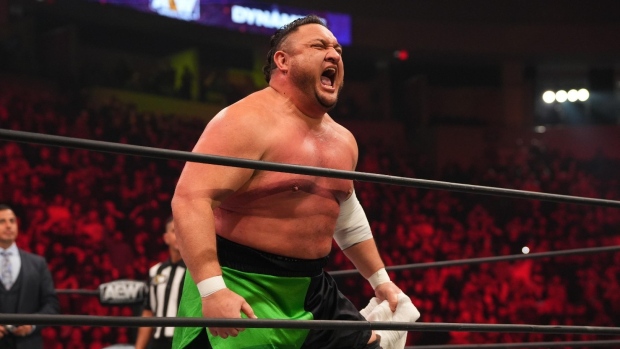 Two legends of professional wrestling will meet for the first ever time on Wednesday night when Minoru Suzuki defends the ROH World Television Championship against Samoa Joe. Plus, Jurassic Express puts their AEW World Tag Team Championships on the line against reDRagon and CM Punk takes on Penta Oscura in another first-time encounter. ​You can catch AEW Dynamite LIVE at 8pm et/5pm pt on TSN2, streaming on TSN Direct and on TSN.ca.

AEW World Tag Team Championship match: Jurassic Express (Jungle Boy and Luchasaurus) (c) vs. reDRagon (Bobby Fish and Kyle O'Reilly) - Persistence has paid off for reDRagon. Well, maybe persistence is the wrong word. Bobby Fish and Kyle O'Reilly have continued to make Luchasaurus and Jungle Boy's lives a living hell to the point that the tag champs have decided to put their titles on the line on Wednesday night against the duo, despite reDRagon not being ranked in the Top 5. While these four men have met in various multi-man matches in the past, it will be the first traditional tag-team match between the two teams. At the Revolution pay-per-view last month, Jurassic Express retained their titles in a three-way dance against reDRagon and the Young Bucks (Matt Jackson and Nick Jackson), but it was Nick Jackson who got pinned. The match will mark the fifth defence of the titles for Jurassic Express, having previously successfully defended their titles in the PPV match and against The Acclaimed (Max Caster and Anthony Bowens), Gunn Club (Austin Gunn and Colten Gunn), Private Party (Isiah Kassidy and Marq Quen) and Dark Order (Alex Reynolds and John Silver). Having already won the NXT Tag Team Championships, ROH World Tag Team Championships and IWGP World Junior Tag Team Championships, reDRagon will be looking to add to their already impressive legacy. Will Jurassic Express retain or will Fish and O'Reilly capture gold for the first time in AEW?

ROH World Television Championship match: Minoru Suzuki (c) vs. Samoa Joe - When Minoru Suzuki defeated Rhett Titus for the ROH World TV Championship at Supercard of Honor earlier this month, it marked the first time that Minoru Suzuki won a North American championship over his illustrious career. On Wednesday night, the former GHC Heavyweight Champion, IWGP Intercontinental Champion and AJPW Triple Crown Heavyweight Champion makes his first defence against Samoa Joe in a match many didn't think was possible. An ROH Hall of Famer, the TV title is the one ROH singles championship that has eluded Joe over his career, but for good reason - it didn't exist when Joe was in ROH, having only been introduced in 2010. Should Joe defeat Suzuki, he would become only the second man to hold all three of the ROH World Championship, Pure Championship and TV Championship, following Jay Lethal. While Joe and Suzuki have never met before, the two have wrestled common foes over the years, including Takeshi Morishima and Kenta Kobashi. Suzuki enters the match on a seven-match winning streak in his latest North American tour, holding wins over the likes of Killer Kross, Effy and "Speedball" Mike Bailey. Joe is coming off of his AEW debut last week, a victory over Max Caster in an Owen Hart Foundation Cup qualifier. Which of these legends will emerge victorious on Dynamite?

CM Punk vs. Penta Oscura (w/ Alex Abrahantes) - Over the past several weeks, CM Punk has made it obvious that he's coming after the AEW World Championship currently around the waist of "Hangman" Adam Page. But with Page currently occupied with Adam Cole, Punk has been forced to bide his time. Coming off of victories over Max Caster and Dax Harwood, Punk took to Twitter to practically beg for a match for Wednesday night with the challenge being answered by Penta Oscura in what should be a unique first-time match between the two competitors. Penta has readopted his darker persona in recent weeks as he and PAC have been embroiled in a feud with the House of Black (Malakai Black, Brody King and Buddy Matthews). He also enters Wednesday night's match off of a pair of singles victories. While the challenge of Punk will be one that he takes very seriously, the question remains how much of Penta's focus will be on the potential presence of the House of Black? Can Punk continue to make his case for a title match or will Penta pick up a big singles victory?

Trios match: Jericho Appreciation Society ("The Influencer" Chris Jericho, Jake Hager and Daniel Garcia) (w/ Angelo Parker and Matt Menard) vs. Eddie Kingston and Proud and Powerful (Santana and Ortiz) - Grudge matches don't tend to be pretty and this one shouldn't be any different. For the first time since the creation of the Jericho Appreciation Society last month, Eddie Kingston and Chris Jericho's former Inner Circle stablemates, Santana and Ortiz, will have an opportunity to get their hands on Jericho, Jake Hager and Daniel Garcia in a sanctioned match. It's safe to say that retribution is in order after the JAS has used their numerical advantage to lay out the trio on a number of occasions, including on last week's Dynamite. It's unlikely that either of these two teams will be terribly concerned with picking up a victory as long as they can make their opponents suffer. And even if there is a definitive winner on Wednesday night, the feud between these two groups won't be put to rest just yet. Which trio will be able to make a statement of intent on Wednesday night?

Maxwell Jacob Friedman (w/ Shawn Spears) vs. Capt. Shawn Dean - MJF isn't in a good mood right now. If the ongoing situation with Wardlow and FTR's seeming defection weren't enough to keep him busy, Shawn Dean has become a problem for what's left of The Pinnacle. On last week's Dynamite, Wardlow's arrival during Shawn Spears's match with Dean was enough of a distraction to allow Dean to roll up Spears for a three count. That victory made Dean 2-0 against The Pinnacle in 2022, having previously defeated MJF by disqualification in January when CM Punk hit him with a GTS to get MJF DQed. Embarrassed by everything going on around him right now, MJF is out to square his record against Dean and send a message to Wardlow, who continues to antagonize him despite being banned from every arena that AEW is running. A motivated Maxwell Jacob Friedman is a sadistic Maxwell Jacob Friedman and Dean must be ready to handle that version of MJF on Wednesday night. Will MJF get his revenge or will Dean extend his impressive run against The Pinnacle?

Marina Shafir vs. Skye Blue - Ahead of her upcoming match against Jade Cargill for the TBS Championship, Marina Shafir makes her Dynamite debut against Skye Blue. A member of the Four Horsewomen of MMA alongside Ronda Rousey, Shayna Baszler and Jessamyn Duke, Shafir has transferred over her MMA background into professional wrestling and stepped into the ring against the likes of Deonna Purrazzo, Bianca Bel Air and Masha Slamovich. While Blue might be young, she has proven to be more than able to hold her own against more experienced competitors and won't be at all intimidated by the former Invicta Fighting Championship featherweight. Blue holds victories over Shazza McKenzie, Allysin Kay and Kiera Hogan among others. Can Shafir head into her showdown with Cargill on a winning note or will Blue pick up an impressive victory?

Shane "Swerve" Strickland and "Limitless" Keith Lee vs. Team Taz (FTW Champion "Absolute" Ricky Starks and Powerhouse Hobbs) - The heated feud between these two sides takes centre stage on Dynamite when Swerve Strickland and Keith Lee team up to take on Team Taz's Ricky Starks, in his hometown of New Orleans, and Powerhouse Hobbs, two men who have been thorns in their side since the pair arrived in AEW. Team Taz feels insulted by people like Swerve and Lee, who have only recently come to AEW and haven't paid their predecessors the proper level of respect. In recent weeks, these men have met in singles matches in different combinations with Starks holding a victory over Swerve and Lee having defeated Hobbs. All bets are off when a match has preexisting enmity, so the chances for this bout to go off the rails a little bit are pretty high. Which side will fire the latest salvo in their ongoing war?