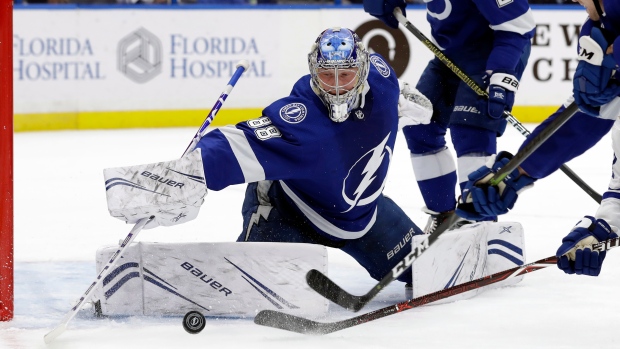 The deal carries an average annual value of $9.5 million and will make Vasilevskiy the third-highest paid goaltender in 2020-21, behind Carey Price and Sergei Bobrovsky.

Gold Star Hockey client Andrei Vasilevskiy has signed an 8-year extension with the Tampa Bay Lightning. He would like to thank great fans, ownership and management for making Tampa such a great place play and live for him and his family. #WeAreGoldStar! pic.twitter.com/e6ZSGWU8BC

The 25-year-old was previously scheduled to become a restricted free agent next July after playing out the final season of three-year, $10.5 million contract. His new extension is signing bonus-heavy, with only $31.5 million being paid in the form of salary. He will earn an $8.5 million bonus in 2020-21, followed by a $10 million bonus in 2021-22, then $6.5 million bonus in 2022-23. In those three seasons, $25 million of his $34 million total compensation will be paid in bonuses.

“The Lightning are very proud to extend Andrei for another eight years today,” Ligtning general manager Julien BriseBois said. “Since joining the organization Andrei has shown unmatched work ethic and professionalism both on and off the ice.  We look forward to him continuing his career in Tampa Bay for the foreseeable future.”

“I’m very excited to sign this extension with the Lightning today,” Vasilevskiy said. “I’d like to thank the entire organization, including Mr. Vinik, Julien BriseBois and the great Bolts fans, for making this such a great place to play and live for me and my family.”

Vasilevskiy is the sixth member of the Lightning to be signed through at least 2023-24, joining Nikita Kucherov, Steven Stamkos, Victor Hedman, Ryan McDonagh, Yanni Gourde and Tyler Johnson. His $9.5 million cap hit is tied with the Kucherov for the highest on the team.