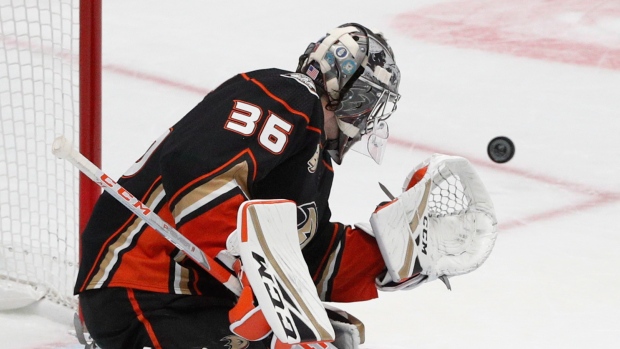 Absent a few lingering restricted free agents, the National Hockey League off-season is all but wrapped up. At this point, we’re starting to get a feel for how teams will head into the 2019-20 regular season. There have been substantial changes across the hockey landscape over the past three months, and perhaps no group has experienced more turnover than goaltenders.

The biggest name to shift was Sergei Bobrovsky, who left Columbus for a seven-year, $70-million contract in Florida. Robin Lehner, who finished third in the Vezina voting last season on Long Island, is now in Chicago. His replacement is Semyon Varlamov, who signed a four-year contract with the Islanders after being pushed out of Colorado by the up-and-coming Philipp Grubauer.

I think you get my point. There was a bit of a chain reaction that ended up impacting a number of teams across the league.

One of the things I wanted to do when the carousel finally stopped was to reassess all of the goaltender depth charts to see which teams were carrying a competitive advantage heading into the season and which teams might be victimized by poor play in the crease.

Trying to forecast goaltending production is one of the trickiest things an analyst can do. Goal scoring is extremely volatile, and a good piece of performance is contingent on the type of defensive play executed in front of each netminder.

Think of San Jose and Martin Jones last year for a moment. There’s no doubt Jones struggled (in some games, mightily) last year. But there is also no doubt that San Jose frequently carried a “defence optional” approach. Then think of Devan Dubnyk in Minnesota. Dubnyk is a fantastic goalie, but Minnesota was as strong as any team in the league at limiting dangerous shot attempts. How do we reconcile individual performance and team effects, and how do we get a better understanding of the value a goaltender is bringing to his respective team?

One of the ways I like to look at this is by using Goals Above Average. Here, we are trying to assess each goalie’s impact on the odds of a goal being scored. This takes into consideration the shot volume and the shot quality each goaltender faces, and consequently attempts to put each goaltender on a level playing field.

Using some forecasted goaltender depth charts, I looked at a three-year Goals Above Average horizon to get a feel for talent. Then, I created two buckets – the first being where a standard starter/backup relationship would likely exist, and the second being where a timeshare or something closely resembling a timeshare would likely exist. It’s not a perfect science because you are trying to predict coaching behaviour, but directionally I think it’s relatively defensible.

From there, it’s carrying out how many goals we would expect each tandem to save for every 60-minutes of play. Here is how I see the depth charts stacked up league wise. (Note: for Pavel Francouz and Elvis Merzlikins, the two goalies with basically no NHL experience, I assumed performance would sit in the bottom 25th percentile in a normal “backup” role.) 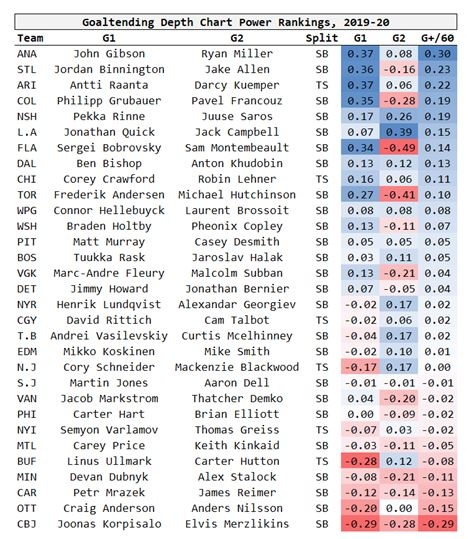 Perhaps not surprisingly, the Anaheim Ducks appear to have the strongest goaltending tandem in the league, and it’s not particularly close. John Gibson has emerged as a perennial Vezina Trophy candidate and is arguably one of the two or three best goaltenders in the entire league. Ryan Miller, though there are surely concerns about his age (39) at this point, is still a quality backup who has stopped 91.2 per cent of shots in his last 48 games. Even if Miller experiences some further age degradation, the Ducks also have Anthony Stolarz in the fold.

I mention Miller and Stolarz because having credible backup goaltending does matter. It’s not as if Gibson is night-and-day better than the likes of Jordan Binnington in St. Louis, Grubauer in Colorado, Bobrovsky in Florida or Frederik Andersen in Toronto. But all of those teams have major question marks when it comes to the 20 or so games we would expect to see the backup, and that’s not insignificant.

Think about it from St. Louis’ perspective for a moment. In the nearly 3,000 minutes Binnington didn’t play last regular season, the Blues managed a team save percentage of 90.1 (predominantly from Jake Allen and Chad Johnson). Toronto had similar issues, with a 1.7 percentage point drop-off between the likes of Andersen and the Garret Sparks/Michael Hutchinson duo. Those are considerable gaps, and they do make winning those games – even if we are only talking about 20 games, max, in a given season – more difficult.

There will be a couple of other goaltending stories to watch this season. I mentioned Colorado’s decision to go with Grubauer over Varlamov earlier, and I think there are a few other situations where we may see similar change.

Nashville’s Pekka Rinne has been fantastic for the Predators over the past three seasons, but Juuse Saros is really making life difficult for coach Peter Laviolette. Rinne will keep his job for as long as he continues to play well, but having one of the league’s best backups behind you can’t be a good feeling.

More pressing than that might be in New Jersey, where Cory Schneider is at risk of losing his job to Mackenzie Blackwood. (Quite frankly, Blackwood might really be the “1A” goalie in this duo to start the year.) Edmonton would be another team to watch on this front, with Mikko Koskinen really being a major unknown heading into the season and the addition of veteran Mike Smith.

I’ll end with Ottawa and Columbus. The immediate goaltending situations are dire (in Columbus’ case, that could be an understatement), but in both cases help is on the way. The Senators have Filip Gustavsson, Marcus Hogberg and Joey Daccord all on the way. Columbus has Veini Vehvilainen and Daniil Tarasov in the queue. So there is plenty of reason to be excited for the future.

The present? Well, it could get a little bumpy.