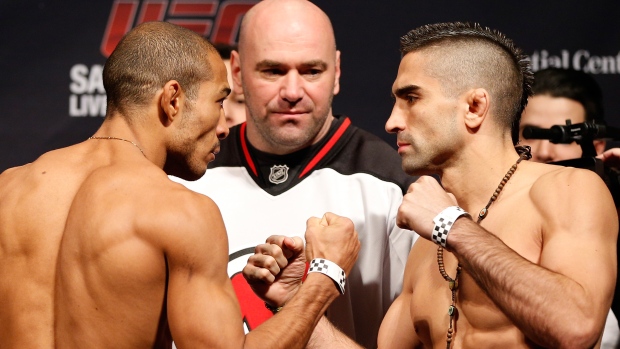 Familiar foes will battle in the co-main event of the UFC’s card in Winnipeg on December 16th as former featherweight champion Jose Aldo will face Ricardo Lamas in a rematch of their meeting at UFC 169.

Santiago Ponzinibbio taking on Mike Perry in a welterweight clash and Jordan Mein against Erick Silva in the welterweight division have also been added to the Canadian card, UFC president Dana White confirmed to TSN.

Aldo returns to the Octagon after dropping the featherweight title to Max Holloway in his last bout at UFC 212.  Considered to be one of the best featherweights of all-time, Aldo was undefeated from 2006 to 2014 and successfully defended the UFC belt seven times before being stopped by Conor McGregor at UFC 194.

"Lamas has been on a tear for a while and he's finally getting another shot at Jose Aldo." said White.

Lamas comes into the bout on a two-fight winning streak after beating Charles Oliveira via guillotine choke and, most recently, Jason Knight via TKO at UFC 214.

The two originally met on February 1st, 2014 at the Prudential Center in Newark, New Jersey in the co-main event with Aldo victorious via unanimous decision.

Ponzinibbio is riding a five-fight winning streak, including a win over Gunnar Nelson in July in Scotland via first round KO, as he faces Perry in the welterweight division.

Perry is on a winning streak of his own, after defeating Jake Ellenberger and Alex Reyes via KO in his last two outings. Perry is 11-1 overall with the only setback of his entire MMA career coming in a December 2016 loss to Alan Jouban.

His opponent, Erick Silva, lost his last outing to Yancy Medeiros at UFC 212 in June of 2017, after a victory over Luan Chagas via rear-naked choke at Fight Night Brasilia in September of 2016.

Former champions will headline the Winnipeg card as the UFC previously announced Robbie Lawler vs. Rafael dos Anjos as the main event of the card that will take place at Bell MTS Place.

White announced  on Friday that the headliner is also a number one contender fight.

"Rafael dos Anjos just had a great fight to put himself back in contention, a win over Robbie Lawler obviously would do it." said White.

A light heavyweight bout between Canadian Misha Cirkunov and Glover Teixeira was also announced for this card after being moved from its original placement on Fight Night Sao Paulo later this month.

Chad Laprise will also return in Winnipeg, as he’ll face Galore Bofando, while John Makdessi will do battle with Abel Trujillo.