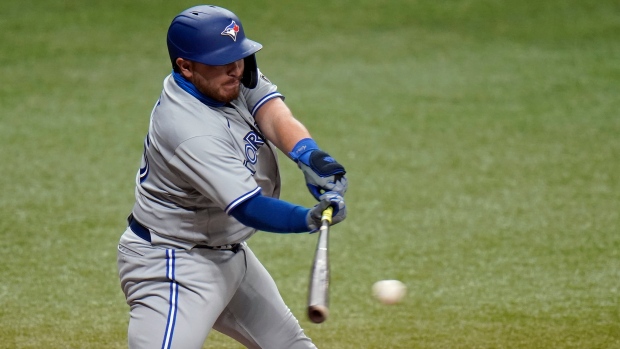 TORONTO — There are differing opinions surrounding what the Blue Jays should do with Alejandro Kirk, and none of them are really wrong.

At the age of 22 with zero experience above High-A until his major-league cameo last September, more time in the minor leagues to work on controlling a running game and to figure out the nuances of the catching position certainly makes sense on the surface.

The bat, however, despite that relative inexperience, does not need work.

That’s why Blue Jays’ brass felt comfortable making the call for Kirk last September in the first place, as their trio of catchers — Danny Jansen, Reese McGuire and Caleb Joseph — had provided just about nothing offensively up to that point.

The precocious feel for hitting, the ability to barrel the baseball up seemingly at will, there was evidence of that in the .315/.418/.500 minor-league slash line, and Kirk was continuing to hit pro pitching at the alternate site in Rochester.

The kid rakes and is an extremely tough out. There’s lots of evidence of that, even though many will scream “small sample size” because of the major-league resume. But truthfully, there’s a long track record behind the scenes of Kirk succeeding against all types of pitching.

He’s also worked on his body this winter, showing up to camp in Dunedin in — insert cliche here — the best shape of his life.

“He’s been working hard, so he’s come in in great shape,” Jays pitching coach Pete Walker said Sunday. “I just watched him throwing to the bases today and he was moving great and throwing rockets down to third base. He can hit, we know that, and defensively, he’s progressing. He’s developing. He did some nice things back there, guys got comfortable throwing to him. He’s got a very good way about him behind the plate. Like I said, he’s still learning. He’s going to get experience from spring training here, but first impression was awesome with him back there and I think the guys enjoyed throwing to him, but he looks ready to go.”

In addition to the Jays searching for more punch behind the plate in the midst of a postseason run last September, there’s another reason they were willing to summon Kirk earlier than many expected: He’s likely never going be a huge asset defensively and a longer development track may not yield huge results, especially when the bat is ready to contribute.

In a normal scenario, heading back to Triple-A for a little bit more seasoning and keeping the 26-year-old McGuire on the roster in order to not expose him to waivers and risk losing him for nothing would be a reasonable call.

That changes the goals with prospects sometimes. At some point, the Jays will start pushing some of their pitching prospects, too.

This is a ball club trying to compete, and with all of the attention being paid to a rotation that isn’t postseason worthy as of today, they have to make up the difference somehow in the early going.

Kirk will help them win games. He did that last September.

When Kirk was summoned last year, McGuire had slashed .073/.073/.146 and was flailing away with 11 strikeouts and zero walks in 45 trips to the plate. Small sample size to be sure, which is why he's still around.

But running that back in a season you’re supposed to compete would clearly be prioritizing protecting the asset over winning games.

With the catching depth chart stacking up and starting to bottleneck in the upper minors, Kirk spending his days working with major league coach John Schneider, a former catcher, and caddying for starter Jansen to begin the season is the best option for both parties.
Walker might agree.

“It’s always timing, right?” Walker said. “It’s where you are as an organization, who you have in place and obviously the opportunity was presented to him last year. You would always love to make sure guys are finished products by the time they come to the big leagues, but sometimes your situation dictates differently. He certainly worked hard. He did a nice job last year and I can certainly see him helping us out behind the plate.”

The Jays might need to let Kirk ride and find out what he can be because there’s more catching coming … if they’re not used as trade chips.

Riley Adams is a 24-year-old third round pick from 2017 whose 332 plate appearances at Double-A in 2019, combined with solid reports from the alternate site last year in Rochester, would seem to have him ready to be the primary catcher at Triple-A.

Down a level, Gabriel Moreno, 21, should star for Double-A New Hampshire and could be a top 50 prospect in baseball at this time next year.

High-A Vancouver — or wherever it is they start the season because it’s highly unlikely it’ll be in Canada — won’t be left out, either, as 2019 ninth-round pick Phil Clarke has quietly excited the club with his bat and needs to play every day.

Development can happen in the majors, too, and the big-league cup of coffee motivated Kirk in the off-season.

“The main focus was my nutrition, just making sure of what I was eating every day,” Kirk said Sunday through team translator Tito Lebron, ahead of Monday’s first full team workout in Dunedin. “I’m not sure exactly how much weight I lost, but I know I lost a lot. The bottom line is that I feel great right now, a lot better than last year. I’m moving well and I’m happy.
“I can get to that inside pitch a lot better than last year. I feel quicker, faster when I’m catching, moving, blocking, everything. It’s a big difference from last year.”

When it comes to McGuire, the dearth of catching around the majors should give him value.

He’s a tremendous defensive backstop and the bat has shown flashes.
For the Jays, it would be beneficial if he flashed again this spring during Grapefruit League games because he’s likely to play a lot as a showcase.

He may not fetch much, but a lower level pitching prospect and the roster flexibility a move like that would provide isn’t nothing.

If he’s exposed to waivers, it would be surprising if he wasn’t claimed.
Either way, the Jays could then move to add a veteran as insurance — like Joseph a year ago — and that backstop could serve as the third catcher on the taxi squad while not taking up a 40-man roster spot. That’s ideal.

McGuire eventually pleaded no contest to a disorderly conduct charge in Pinellas County court and paid $500 in fines, but even at the time there were internal conversations about moving on right then and there.

But regardless of all that, Kirk pushed the envelope and has jumped McGuire on the depth chart anyway with his play.

Allowing Kirk to continue to get his feet wet in the big leagues, learn on the fly and be pencilled in for 60 or 70 starts while playing a key late-game pinch-hit role might be the best thing for his development, but the Jays have six weeks to let that play out.

At the same time, they’ll dangle McGuire to catcher-needy teams around baseball and that list is not a short one.

Kirk, who spent most of his winter back home in Tijuana, Mexico, feels ready for an opening day job.

“Definitely,” he said. “I feel like I’m ready for the big leagues and I prepared myself and worked very hard in the off-season for that and I’m just here to compete for a spot.”