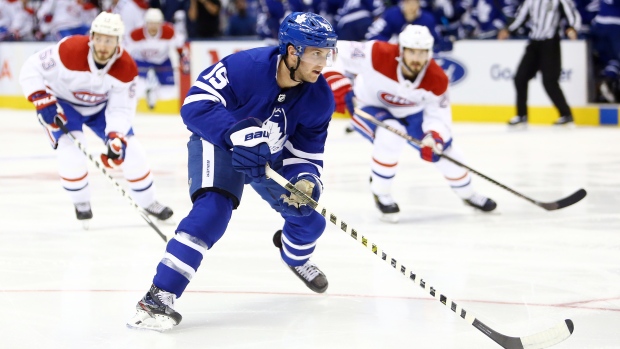 It appears Alex Kerfoot will get the first crack at replacing John Tavares on a line with Mitch Marner for the Toronto Maple Leafs.

Kerfoot skated on a line with Marner and Ilya Mikheyev wearing top-six blue on Friday, one day after Tavares was ruled out for at least two weeks with a broken finger.

Spezza also took over Nylander's spot on the second power play unit and is expected to join a unit with Tyson Barrie, Kapanen, Kerfoot and Moore.

Kerfoot, who was acquired in the off-season from the Colorado Avalanche, has two goals and four points in eight games this season. He had 15 goals and 42 points in 78 games last season.

Spezza, who signed with the Leafs as a free agent on July 1, has one assist in three games this season, missing five games as a healthy scratch. He had eight goals and 27 points in 76 games with the Dallas Stars last season.

The Maple Leafs, who will be without Tavares for a minimum of six games, will host the Boston Bruins on Saturday.