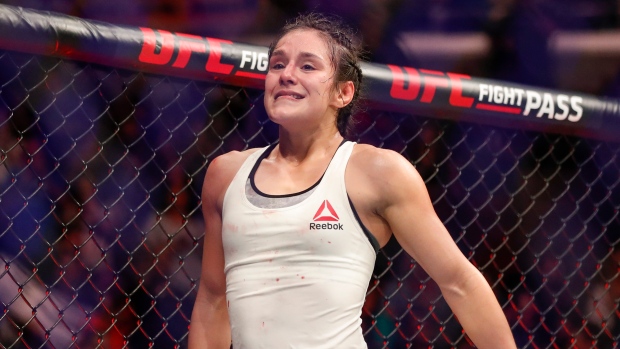 LAS VEGAS — Strawweight contender Cláudia Gadelha's bout with Alexa Grasso on the pay-per-view portion of the UFC 246 card has been cancelled after Grasso badly missed weight.

The Nevada State Athletic Commission made the decision Friday morning after Grasso weighed in at 121 1/2 pounds, missing the strawweight allowance by 5 1/2 pounds.

Because Gadelha made weight at 115 1/2 pounds, the weight difference between the competitors was too big to allow the fight to go on with a financial penalty for Grasso (11-3). Strawweight fighters must be only 3 pounds apart at the weigh-in to allow such a consideration, according to the commission.

Gadelha (17-4) fought for the strawweight title in 2016. The Brazilian veteran has won four of her six bouts since, including a victory over Randa Markos last July in Las Vegas in her most recent action.

Grasso also missed weight for a bout against Markos in August 2017. She has lost two of her last three fights, including a decision loss to Carla Esparza last September in her native Mexico.

Gadelha and Grasso were scheduled for the second fight on the five-bout main card at T-Mobile Arena. The UFC didn't immediately announce the replacement fight.

UFC 246 is headlined by Conor McGregor's return to the cage against Donald “Cowboy” Cerrone in a welterweight bout.