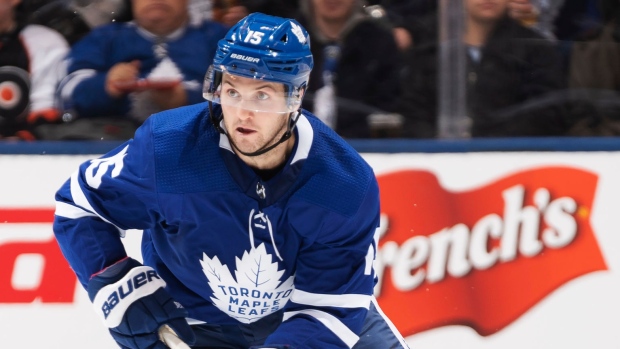 Looking back on his first season with the Maple Leafs, Alexander Kerfoot is blunt about his own shortcomings while remaining hopeful a shot at redemption is still to come.

"I am not overly thrilled with how things went from a personal standpoint," Kerfoot told reporters on a conference call Thursday. "Everything was a little bit inconsistent. I think there were times when I was happy with my game, [but] overall it was a little bit more inconsistent than I would like. Maybe I didn't contribute/produce as much as I would have liked to. I'm still confident in myself, I think I can still be a big part of the team and I'm excited to get back and keep improving and get better and help out."

Kerfoot was traded to Toronto from Colorado last July 1, part of a package with defenceman Tyson Barrie in exchange for Nazem Kadri. The expectation was that Kerfoot would replace Kadri as the Leafs’ third-line centre, and just three days after being acquired, he signed a four-year, $14 million extension with the team.

But the transition to his new team wasn’t entirely smooth for Kerfoot. Barely a month into the season, he broke his jaw in a collision with L.A. Kings forward Jeff Carter and missed three games. Then two weeks after coming back, while playing in Colorado for the first time since the trade, Kerfoot was called for boarding defenceman Erik Johnson and suspended two more games.

"It was a weird stretch there, where I came back from the injury and felt like I was playing horribly," Kerfoot said. "And then to go to Colorado, it's an emotional game and I do that to one of my good friends. I felt horrible about it. There was no intent there or anything like that. I wish I could take it back, but I don't think it impacted the way I played the rest of the year."

That all happened around the same time the Leafs fired former head coach Mike Babcock on Nov. 20 and installed Sheldon Keefe behind the bench, adding further turbulence for Kerfoot to navigate as Keefe used him at both centre and left wing.

Kerfoot never managed to establish much rhythm on the ice, sitting at 28 points (nine goals, 19 assists) through 65 games after putting up 42 points in 78 games last season with the Avalanche.

"I think that there was just a lot that happened this year," Kerfoot said of his struggles. "You come in from one organization to another organization. You meet a new coach, get comfortable with the new coach, and then the coach gets fired and then there's a whole new coach coming in, running a whole new system, and you have to get used to that. And I get suspended for a couple games, I break my jaw. I don't mean to make excuses; I just think there was a lot of things thrown at you. But I don't know if that necessarily was the reason why I didn't play up to my personal expectations."

Kerfoot believes the root of his issue might be in establishing good habits that continually highlight his strengths.

"It was just a consistency thing," he said. "That's something I can learn [from]. I still need to get better. You see some of the top guys in the world, they're elite every single game. Maybe my elite is different than their elite. I’m never going to play as well as [Auston] Matthews or someone like that, but just bringing that consistency on daily basis is important."

Adjusting to the spotlight in Toronto was another obstacle for Kerfoot, who wasn’t sure what to expect from the hockey-crazed market.

"Everything is amplified for sure," he said. "There are things that are more difficult. The highs are probably a lot higher than they are in other markets and the lows are a lot lower. You kind of have to ride the wave. When you're winning a few games, it feels like you're the best team in the league and then you lose one, and everyone wants to trade everyone, fire everyone."

Despite what has proven to be a trying season, Kerfoot can’t wait to be back in Toronto. He has been isolating primarily with family in Vancouver since the league paused on March 12, and has also travelled a few times to the family's vacation property in Whistler to skate on the indoor rink there.

But for the most part, Kerfoot has been keeping it simple with yoga and strength workouts, anxiously waiting to find out what’s next.

"Everyone's paying attention to [league news]," he said. "It's our job; we need to be ready whenever we need to come back. Our organization is doing a really good job of keeping us informed and updated on a daily basis as to what's going on around the league, where everything stands, and I think that everyone on our team is well prepared and ready to come back if and when we do."