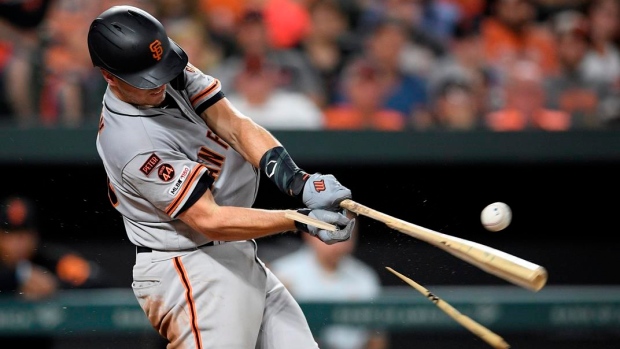 Buster Posey is opting out.

San Francisco Giants catcher Buster Posey has opted out of the 2020 season. Posey, a former NL MVP and six-time All-Star, had missed the last few days of workouts as he contemplated his decision.

The San Francisco Giants catcher told reporters on a Zoom call Friday morning that he will not be participating in the 2020 Major League Baseball season. The Giants say they support the former MVP's decision.

ESPN's Jeff Passan notes that Posey has missed the last few days of workouts as he contemplated his decision.

The Athletic's Andrew Baggarly notes that Posey and his wife are adopting identical twin girls and that is part of the reason why he has missed time in camp. Baggarly adds the twins were born prematurely and are stable but will be in hospital for some time.

Buster Posey and his wife are adopting identical twin girls. That is why he has missed time in camp. The twins were born prematurely and stable but will be in NICU for some time. He is opting out of the season.

He also won the 2012 National League MVP Award when he led the league with a .336 batting average while hitting 24 home runs and driving in 103.

But Posey wasn't the only big leaguer to opt out of the 2020 season on Friday.

Chicago White Sox right-hander Michael Kopech informed his team that he is also opting out and like San Francisco, the White Sox are supportive of Kopech's decision.

Posey and Kopech join the likes of David Price, Ryan Zimmerman, Ian Desmond and several others to opt out of the shortened 2020 campaign. MLB's 60-game regular season is scheduled to begin on July 23.