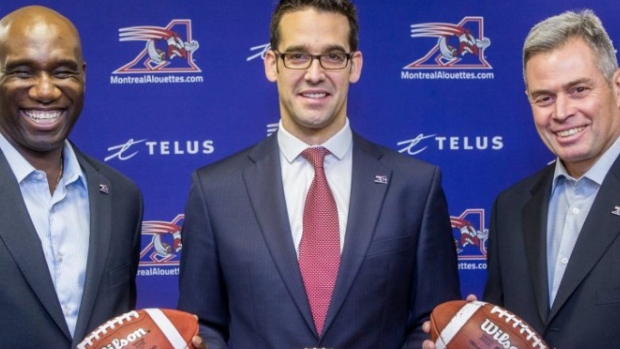 The Montreal Alouettes made official what was reported Tuesday, naming Kavis Reed the team's new general manager and announcing Jacques Chapdelaine will stay on board as the team's head coach.

The Alouettes also announced Wednesday Patrick Boivin will join the team as President and CEO.

Boivin replaces Mark Weightman, who had been in the position the past four years and with the Alouettes the past 21 seasons.

“These appointments are the launching point for a new era for the Montreal Alouettes, and we are excited for what these gentlemen bring to the Club, on and off the field," Alouettes lead governor Andrew Wetenhall said in a team release. "We are convinced that Patrick’s skills and leadership in sports organization management and marketing will bring new and creative thinking to our approach to the Quebec community. Together with the appointments of Kavis Reed and Jacques Chapdelaine in Football Operations, we are looking to build a sustainable foundation for the Club’s future. We hope to achieve success as soon as next season, bringing the players and fans a winning organization and a winning team.”

Boivin joins the team from Concordina University, where he served as the Director of Recreation and Athletics since 2013. Boivin has also held management positions with the Montreal Canadiens and NHL Enterprises.

“I accepted the position of President and CEO of the Montreal Alouettes with great humility and pride," Boivin said in a team release. "I know the scope of the challenge before me, and I am determined to take it up with the help and support of all the members of the organization. In 2017, our organization will undergo significant changes. Kavis Reed’s and Jacques Chapdelaine’s efforts will make it possible to take the team in a new direction, both on the field and off, which will be a source of pride for Montrealers and all football fans.”

Reed, who has head coaching experience in the CFL but no prior general manager experience, has been with the Alouettes the past two seasons. Reed first served as special teams coordinator before adding the assistant head coach title.

“We completed a thorough general manager search process, evaluating over 15 candidates and interviewing five of them. Kavis proved the most prepared, thoughtful and well-rounded candidate to become our next general manager,” Wetenhall said. “Kavis brings significant experience to the position, having long played direct and indirect roles in the personnel management area of the CFL, and his detailed review of how he plans to build a scouting and recruiting organization were truly differentiated. Additionally, Kavis brings a strong business background and business-like approach to the role, and we have seen the early returns of this during his first ten days on the job. Combined with his knowledge of our player and coaching personnel, Kavis best positions the Alouettes’ to achieve success on and off the field.”

“I am very proud of this appointment and honored by the show of confidence, which will enable me to continue the work I’ve done with the Montreal Alouettes in developing an exciting and winning team," Reed said in the release. Montreal is a great football town, and I intend to do everything in my power to return this team to its glory days.”

Chapdelaine took over as interim head coach late last season and led the Alouettes to a 4-2 record down the stretch.

“I am very pleased to continue the work started with the team at the end of the season," Chapdelaine said. "In the last six games, the players clearly demonstrated a new winning identity, and what they are capable on and off the field. These results are encouraging, and I will work with all our coaching staff so that the team starts off the next season at full strength. The club has great potential, and 2017 will be an opportunity for us to demonstrate the fact clearly to our supporters.”