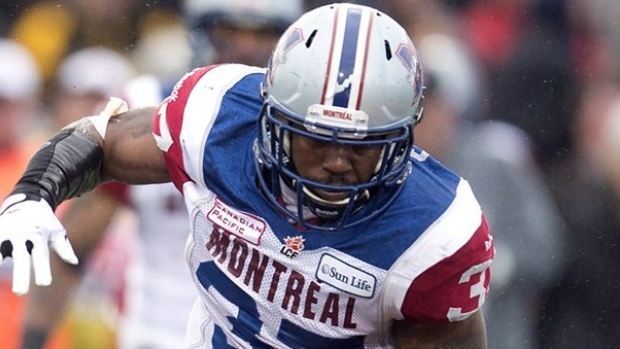 MONTREAL — The Montreal Alouettes have signed international running back Tyrell Sutton to a one-year deal.

The five-foot-eight, 213-pound Sutton led the team with 843 rushing yards on 152 carries and ran for five touchdowns over 14 games last season.

The versatile 31-year-old added 312 receiving yards and a touchdown on 44 receptions.

He was slated to become a free agent next month.

"Tyrell was one of our most physical players last season, creating holes when there sometimes weren't any and stretching plays when they seemed to be over," Alouettes general manager Kavis Reed said in a statement. "He is devoted to his team as well as his teammates and we are excited to have him back with us in 2018."

Sutton has rushed for 3,156 yards and 14 touchdowns, and added 1,198 receiving yards and three touchdowns in 60 career CFL games with Montreal.