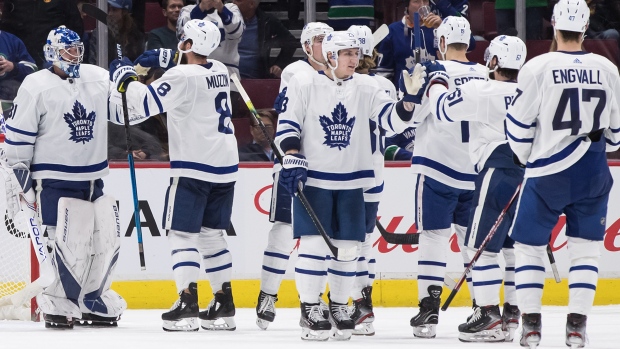 Leafs goalie Frederik Andersen and his teammates celebrate Tuesday's win against the Canucks. , The Canadian Press

TSN Toronto reporter Kristen Shilton checks in daily with news and notes on the Maple Leafs, who held an 11:45 a.m. MT morning skate at the Scotiabank Saddledome in Calgary ahead of Thursday night’s game against the Flames.

The Maple Leafs have won their last two games by a combined score of 9-3, but a spell of success isn’t enough to make head coach Sheldon Keefe complacent. At Thursday’s morning skate ahead of facing the Calgary Flames, Keefe had adjusted all but one of the forward lines, leaving John Tavares’ group with Mitch Marner and Zach Hyman intact while moving Kasperi Kapanen to play with Auston Matthews and William Nylander, Pierre Engvall onto Alex Kerfoot’s unit with Ilya Mikheyev and having Jason Spezza centre Nic Petan and Pontus Aberg.

“It’s really just us trying to do different things,” Keefe explained. “Trying to get [Kapanen] a little more involved up with Matthews and [Nylander]. We've tried that [at some point in] each game that we've played here of late so we just want to try them a little more on a full-time basis and see how it goes.”

Keefe also said the changes were born of wanting more from his third line, which hasn’t been generating much offensively – Kerfoot has only one assist his last 11 games, and Mikheyev has gone 20 games without a goal. Keefe thinks bringing in Engvall might help to ignite the whole group.

“There’s lots of speed and size on the wings,” he said. “We're trying to get a little more traction with that line in terms of its ability to spend time with the puck and spend time in the offensive zone. We think that with Engvall and the way that he's played, we'd like to get him a little more involved up in the top nine and this is a chance for us to have a look at that.”

As Engvall slid up the Leafs’ ranks, Aberg took a step back to the fourth line after playing two games with Matthews and Nylander. The winger was recalled from the American Hockey League’s Toronto Marlies for the first time this season last Friday, and Keefe insisted it wasn’t anything Aberg had done wrong that prompted the demotion.

“He's skated really well. I've really liked his game defensively,” Keefe said. “I think he's filled in [for the injured Andreas Johnsson] very well. [He’s] in the right spot defensively and really skating hard. I think his play with the puck can go to another level, I think that's just a little bit of nerves and being uncomfortable. Our moving him down in the lineup today has nothing to do with his play; it's more just adjusting everybody else.”

While that process continues, Frederik Gauthier is likely to remain on the outside looking in. He’ll be a healthy scratch for the fourth straight game on Thursday, and Keefe said there’s really nothing Gauthier can do to get back in until the Leafs reach some conclusions on other players.

The decisions he’s making might be tough at times, but Keefe’s players respect his willingness to keep the team evolving.

“He's still getting a feel for us and we're still getting a feel for him and how we're trying to build and adjust,” Tavares said. “Obviously, we know what his intentions are, what he's trying to do and trying to get the most out of everybody, get us all playing at a high level. So we're just ready for whatever he wants to throw at us or prepare for us and when we have the type of depth and talent we have guys always look forward to playing with one another.”

Frederik Andersen’s game has been stronger than ever lately for the Leafs, which made it a no-brainer for Keefe to ride him again in a sixth straight start Thursday.

“He's in a groove, obviously,” Keefe said. “He means a lot to our team. We've known that, but the fact that he's feeling good and then we had a day off yesterday, all of that, it was just a pretty easy decision."

Since the Leafs admittedly hung their goaltender out to dry against the Philadelphia Flyers in a 6-1 loss last Tuesday, Andersen has been brilliant between the pipes, allowing only five goals-against in his last three games. But because of how much Andersen has played lately, and after he requested to play back-to-back in last Wednesday’s tilt against the Colorado Avalanche, Keefe had pledged that at least one start on this four-game road trip would go to Michael Hutchinson.

With only a visit to the Edmonton Oilers on Saturday remaining before the Leafs head home, Keefe’s running out of time to make good on that intention. And he doesn’t sound totally convinced it’ll still happen.

“It's pretty well documented that you want to limit the amount of time your starter gets and try to get proper time for the backup,” Keefe said. “And that remains our philosophy and what we would want to stick to, but the circumstances are a bit different in terms of the schedule here. We haven't had back-to-backs and the goalie has played really well and that factors into everything. You have a philosophy, but you're always kind of adjusting it on the fly.”

Keefe knows that “over time” the Leafs will have to get some rest for Andersen, who is now on pace to make 65 starts this season. And that it’s also imperative for Hutchinson, who has yet to win a game this year and last played on Nov. 29, not to become rusty.

“I don't like to see any of our guys have to sit for too long, because when you leave them they're not as prepared as you'd like them to be,” Keefe said. “So that is a factor, and definitely it's something that we've talked about. You take in all the information and try to make the best decision possible to give your team the chance to win, while still balancing the fact that Freddie's workload is something we have to be conscious of.”

The early returns on in-season coaching changes for the Leafs and Flames have looked surprisingly similar to date, producing more confident teams that are currently flying high. Since interim head coach Geoff Ward replaced Bill Peters, Calgary is a perfect 6-0-0, while Toronto is 6-3-0 since Keefe took over from Mike Babcock.

“We've been starting to get better results and some of the changes have played into our group really well and guys have really embraced it,” Tavares explained of the Leafs’ turnaround. “We’ve just tried to really understand that we have to find ways to win and play a lot better than we did. Just stay with it, keep working, and as a group staying together and continuing to feel more comfortable with the things we're doing and finding ways to win and just play better.”

“I think the guys are playing with a lot of enthusiasm,” added Tyson Barrie. “And we're being a little bit more creative and we're still trying to figure out everything involved in the system and stuff but I think it's been a good fit for this team and I think it's only going to get better.”

That’s not to say there haven’t been bumps along the way for Toronto – like over their recent two-game losing skid – but the resiliency shown has been encouraging, too.

“It's been a bit of a process, with a new coach, new system and stuff like that,” said Matthews. “But I think over the last couple weeks we've had good meetings, just trying to sort stuff out and really come together. We've changed a lot of things so that takes time, but the more we play and practice and have these games where we're playing good teams and we come out and play well, I think it just gives us more confidence moving forward.”

For the Flames, Ward’s impact has gone beyond just what they’re doing on the ice to how the team feels about itself in the dressing room as well.

“Once [Ward] stepped in, it's kind of a fresh start for everybody,” said Matthew Tkachuk of the Flames’ improvements. “And the way things are going, we were far out of it, we weren't playing good hockey and maybe guys, if they weren't happy necessarily with their roles or their minutes before, it's a fresh start for everybody and I thought the new energy in the room was good for us and a new voice was good. We love playing for him.”

“We've changed a few of our systems and the way we backcheck and stuff like that but guys have confidence right now,” added Sean Monahan. “We went through a stretch there where we weren't playing great hockey and now we're picking it up. When everybody's contributing and getting the puck to the net guys start to roll.”

“I'm really close with [Tkachuk] and Noah so it's always fun to catch up,” Matthews said. “We only get to see each other twice a year so I had a good day yesterday with them, had a good meal and it'll be fun to play against them tonight.”

Tkachuk was equally enthusiastic about the chance to face Matthews again. The three friends don’t often talk hockey in their downtime, but Tkachuk said Matthews told him the Leafs were “playing well” during his visit.

“I could have figured that out by watching them,” Tkachuk joked. “He's a great player and he's one of my good buddies. He continues to elevate his game to be one of the best in the league so anytime you get to play him it's a challenge and it's a little bit of a measuring stick game for yourself and for your team.”