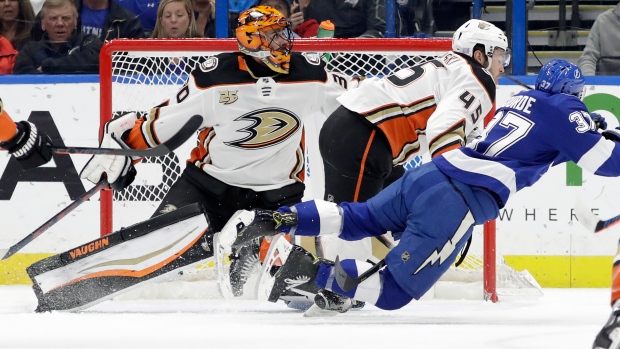 The Anaheim Ducks are set to keep a trio of players from hitting free agency.

TSN Hockey Insider Pierre LeBrun reports that Miller's deal is for one year and carries an average annual value of $1.125 million. Eric Stephens of The Athletic reports the deals for Grant and Holzer are similar.

Miller, 38, spent the past two seasons with the Ducks as backup to John Gibson.

The Vezina winner in 2010 as a member of the Buffalo Sabres, Miller heads into his 17th NHL season.

Miller's 378 career wins are 16th-most all-time and most by an American goalie. The native of East Lansing, MI also spent time with the St. Louis Blues and Vancouver Canucks.

Holzer, 31, appeared in 22 contests for the Ducks a season ago, his fourth season with the club. He had a goal and three assists.

A native of Munich, Holzer has appeared in 157 games over seven seasons with the Ducks and Toronto Maple Leafs.

Grant, 29, joined the Ducks on a waiver claim midway from the Pittsburgh Penguins midway through last season. He appeared in 31 games for the team, scoring twice and adding seven assists.

This is Grant's second stint with the Ducks, having played 66 games for the team during the 2017-18 season. A native of Abbotsford, BC, Ryan has appeared in 208 NHL games over six NHL seasons with the Ottawa Senators, Calgary Flames, Sabres, Nashville Predators, Penguins and Ducks.