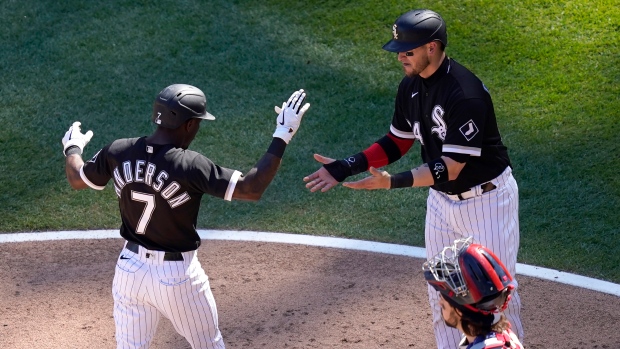 CHICAGO — Tim Anderson hit a grand slam, Leury García drove in three runs from the No. 9 spot in the lineup and the Chicago White Sox beat the Cleveland Indians 7-3 on Saturday.

Lance Lynn allowed three runs over five innings in his return from the injured list for the White Sox, who have won seven of nine.

Austin Hedges homered and Josh Naylor had two hits for the Indians, who have dropped eight of 13.

Lynn, sidelined since April 17 because of a right trapezius strain, allowed four hits and struck out a season-low two. He issued two walks, doubling his season total after four starts.

In his previous two outings, Lynn (2-1) became the first pitcher in White Sox history to strike out 10 or more and walk none in consecutive starts.

Anderson hit his second career slam off Triston McKenzie for a 5-0 lead in the second inning after García drew a bases-loaded walk.

“He’s the same every stinking, wonderful day,” manager Tony La Russa said of Anderson. “He brings effort. He brings a commitment to the practices, to the competition.”

McKenzie (0-1) issued four walks — including three in a row before the homer. He struck out six and gave up one hit in just two innings. He has allowed 18 walks and struck out 29 in 18 2/3 innings.

“I feel like this game honestly just highlighted my mistakes,” McKenzie said. “Out of my past couple outings, it’s mainly been walks. I feel like I’ve been walking a lot of guys, but I’ve been able to kind of just wiggle my way out of situations. I feel like today it kind of caught up to me.”

Six pitchers combined to issue eight walks for the Indians.

García added a two-run double off Phil Maton in the fourth to make it 7-2. García has eight RBIs in his last four games.

Hedges hit a solo shot off Lynn in the fifth.

Nick Sandlin struck out one in a 1-2-3 sixth in his major league debut for the Indians.

Cleveland rallied for two runs in the fourth. José Ramírez drew a walk and missed second base while advancing on Naylor’s double. Ramírez returned to touch the bag and moved to third. Yu Chang followed with a two-run single.

The Indians placed slugger Franmil Reyes on the paternity list and recalled outfielder Daniel Johnson from their alternate site. Johnson had a strong camp with the Indians but didn’t make the opening day roster. In nine games in Arizona, Johnson batted .368 (7 of 19) with two homers, two doubles and four RBIs. He brings speed and athleticism to Cleveland’s lineup.

“I know he wasn’t really pleased when we told him he wasn’t making the team, so this is his chance to kind of show what he can do,” Francona said.

Indians: 2B Cesar Hernandez, who has a banged-up finger, got the day off.

White Sox: To make room for Lynn, OF Luis González was optioned to the alternate site. … La Russa said OF Adam Engel (strained right hamstring) is still working toward a return from the 10-day injured list. Engel, out since March 29, has been targeted for an early May return.