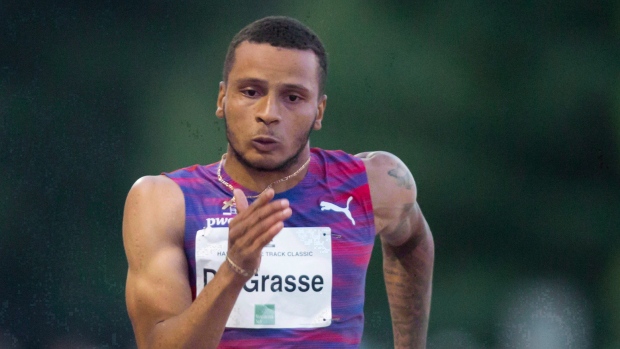 Usain Bolt dominated the sprint world for more than a decade, winning eight gold medals during the last three Olympics. The Jamaican star's retirement following the 2017 World Championship has opened the door for the next generation to take centre stage.

It's also left a gaping hole in the sport.

"We miss him," said Canada's Andre De Grasse, the runner-up to Bolt in the 200-metre event in Rio. "He's a charismatic person and brings a lot of the spotlight to track and field, so we miss him a lot. It was a true honour to compete against him, the fastest man on the planet. Definitely something I'm trying to chase."​

De Grasse also took home a bronze in both the 100-metre event and the 4x100-metre relay in Rio, becoming the first Canadian to win Olympic medals in all three sprint events at a single Games.

The Tokyo Summer Olympics, postponed to 2021 due to the coronavirus outbreak, could be​ the moment when De Grasse takes the torch from Bolt and runs with it.

"A lot of us are trying to make a name for ourselves and keep the sport going," he said.

Olympic medalist 🇨🇦 Andre @De6rasse talks to Mark Masters about his role with Cheerios and Food Banks Canada during the pandemic, the challenges of having the Olympics delayed for a year, his relationship with Usain Bolt and more: https://t.co/wtTVbb3yfh pic.twitter.com/YT4Fpdn7ZT

The 25-year-old from Markham, Ont. appears to be well positioned after winning a silver medal (200 metres) and bronze medal (100 metres) at last year's World Championship.

"I've had experience with winning bronze and silver at the biggest stage, and I want to give myself an opportunity to win a gold medal," De Grasse told TSN in a Zoom interview this week. "My first goal is just to run fast and have a personal best. Then it's to try to break the Canadian record and, in the process, try to win a gold medal. Those are my main objectives."

During his debut Olympics, De Grasse earned a reputation for being a prime-time performer. In the final of the 100 metres in Rio, he ran a personal-best time (9.91 seconds). In the semifinals of the 200 metres, De Grasse set a national record time (19.80) in an attempt to deplete Bolt's reserves. De Grasse then ran the anchor leg as the Canadian 4x100 relay team broke the national record set by Donovan Bailey and company in Atlanta.

Taking the next step up the podium, however, will be about the details.

​"I've been trying to work on my start a lot," De Grasse noted. "I know that my top-end speed is really great, [but] I give away a little too much at the beginning of the race. I've been trying to clean up my technique a lot and, as my coach says, 'Create force throughout the ground.' So, definitely trying to lift a lot more in the weight room and get stronger."

It hasn't been easy for De Grasse in the two years following Rio as he’s dealt with not one, but two hamstring injuries. During the time away from the track, he turned self-doubt into mental strength.

"I faced a lot of adversity the last couple of years, just trying to get back into the game and get back to running fast and making my family and my country proud, but I think I've definitely passed that bump," he said. "Going through that adversity helped me to be a stronger athlete and built a lot of character in me to know that things aren't always going to go your way."

“Before I could get my body right, I had to get my mind right.”

Olympic medalist @De6rasse believes in talking to the people closest to you. @uninterrupted profiles De Grasse and his battle with mental wellness through injury.
#BellLetsTalk pic.twitter.com/IxtoNsftp7

De Grasse is facing another challenge now as he waits out the COVID-19 pandemic in Jacksonville with his family.

"It's definitely been crazy," he admits. "It's really shifted my perspective a lot. There's a lot of things I can't take for granted. I never thought I'd be going through something like this. I don't think any of us have ever been through something like this before. It's been a lot to process. I have definitely been trying to do my part to flatten the curve by social distancing and staying inside as much as possible and only going out for necessities and things like that, but it's been a process."

De Grasse tries to stay fit by running in his yard. He also has a strength circuit set up.

"You tell yourself and others that you have to be grateful for what you have," he said. "I cherish this time, spending it with my family and my kids and trying to educate them on the situation a little​ bit, and take it one step at a time."

De Grasse is also getting involved in a new initiative from Cheerios. The cereal is donating $500,000 to Food Banks Canada and shifting its Olympic campaign to focus on frontline workers during the pandemic. De Grasse had a chance to speak with Chantal Senecal, executive director of the Food Depot Alimentaire in Moncton.

"She also has her 16-year-old daughter working with her," said De Grasse, who will be part of a social media campaign featuring Senecal. "They're taking initiative and putting their lives on the line for us. So, just by hearing her story and the things she’s doing, it’s been amazing. And with the other frontline workers, all of them are inspiring me.”

Next year in Tokyo, De Grasse hopes it will be his turn to inspire the country again.