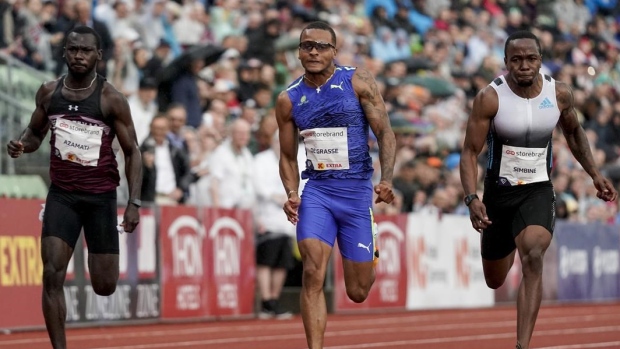 OSLO — Canada's Andre De Grasse appears to be rounding into form at the perfect time.

The six-time Olympic medallist from Markham, Ont., raced to victory in the 100 metres at the Oslo Diamond League on Thursday, crossing in a season's best 10.05 seconds despite rainy conditions.

Britain's Reece Prescod was second in 10.06, while Akana Simbine of South Africa was third in 10.09.

De Grasse, who struggled with an early-season injury, was fourth in the Diamond League stop in Birmingham, England three weeks ago, and then eighth in the 100 at the Prefontaine Classic in Eugene, Ore., on May 28.

He'll race the 200 in the Diamond League stop in Paris on Saturday.

Sarah Mitton of Brooklyn, N.S., was sixth in the women's shot put in her Diamond League debut, with a throw of 18.98 metres. Mitton set a Canadian record of 19.58 last month.

The Canadian championships are next week in Langley, B.C., which will decide the team for the world track and field championships next month in Eugene.

Note to readers: This is a corrected story. A previous version had the incorrect day for De Grasse's upcoming 200 race in Paris.