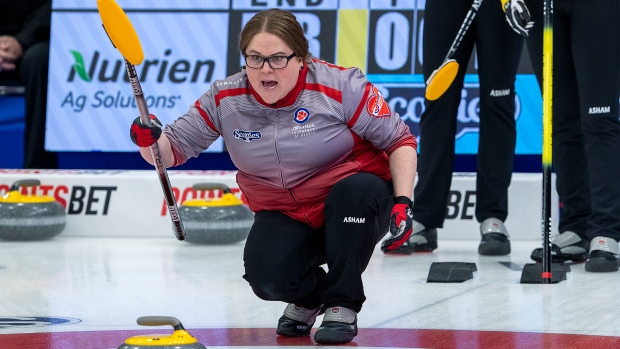 For years Kerry Galusha didn't want to talk about her Indigenous roots. Now, though, the skip of the Northwest Territories rink at the Scotties Tournament of Hearts in Thunder Bay, Ont., has found her voice.

"I never really wanted to talk about anything that would cause conflict,'' said Galusha, a member of the Gwich'in Nation. ``I made a promise to myself I would speak up more.

"I've been talking a lot about reconciliation and trying to be a voice for those that don't have a platform.''

Einarson, the two-time defending champion from Gimli. Man., improved her record to 7-0. She's the only unbeaten rink remaining at the Canadian women's curling championship and has locked up the top playoff spot in Pool B.

"It's nice to get the No. 1 spot but everyone is still going to be gunning for us,'' she said. "We still have to do our thing out there and kind of focus on that.''

Einarson also has been exploring her Métis heritage.

"I am very proud to be Métis,'' she said. "I like to inspire all others of Indigenous heritage.''

Einarson's father Jeff Flett is Métis while her mother has Scottish ancestry.

"My dad's parents passed away really young,'' said Einarson. "So just kind of trying to figure out the family tree, it's pretty special."

Crawford scored four points in the fourth end to defeat Sarah Hill of Newfoundland and Labrador 10-5. This will be her first playoff appearance in 10 trips to the Scotties.

“This team has worked really hard,” said the 36-year-old from Fredericton. “We came into this event believing we had the ability to play well. I think that has made a big difference.”

Wild Card 1 scored three in the sixth end for an 8-2 win over Brigitte MacPhail of Nunavut.

In other games evening games, Krista McCarville’s Northern Ontario rink stole points in four ends to defeat Saskatchewan’s Penny Barker 6-2. Chelsea Carey used a takeout on her last shot in an extra end to give her Wild Card 2 an 8-7 win that eliminated Emma Miskew’s Wild Card 3 from the playoffs.

Any team with four or more losses has been eliminated from playoff contention.

As they work to find their voices to discuss their First Nations heritage, Galusha and Einarson have recently been recognized by Indigenous groups.

In September, Einarson was named the female recipient of the Tom Longboat Award, which recognizes the top Indigenous athletes in the country.

In December, Galusha won the sport award from the Aboriginal Sports Circle of the N.W.T. The award is presented to an individual who has excelled in their respective sport at various levels of competition, plus displayed commitment and dedication to training and competition.

Galusha believes the discovery of unmarked graves at several residential schools across the country has raised awareness of Indigenous history.

"The difference now is people want to learn,'' she said. "There's so many people that never knew anything about residential schools. My brothers and I talk about it a lot now (and) we never used to. We just kind of used to ignore it and our family has been hugely impacted by residential schools.''

Galusha said most curlers are open to discussing Indigenous issues with her.

"I've had a lot of good conversations with my southern teammates,'' she said. "They reach out to me. Everyone wants to learn how to move forward and how to reconcile.''

Galusha comes from a curling family. Her twin brother Jamie Koe skips a team out of the N.W.T., while her brother Kevin Koe has won four Briers and two world championships.

"We just tried to be a good role model for all the Indigenous kids in the North, even non-Indigenous kids,'' she said. "We just want people to know that in the North you can make if it you work hard and dream big.''

This year's tournament features a modified 18-team draw and the return of the Page playoff system.

The two pools of nine are seeded based on their final standing on the Canadian Team Ranking System as of Jan. 10. Following the eight-game round robin the top three teams in each pool advance to an expanded Page playoff system.

Due to COVID-19 concerns the Scotties are being held in an empty Fort Williams Gardens without fans or media in the building. Curling Canada plans to allow about 348 volunteers registered for the competition and another 37 junior curlers from the area to attend the playoffs beginning Friday.

The tournament's champion will represent Canada at the 2022 Women's Curling Championship in Prince George, B.C., from March 19-27.

This report by The Canadian Press was first published Feb. 2, 2022.