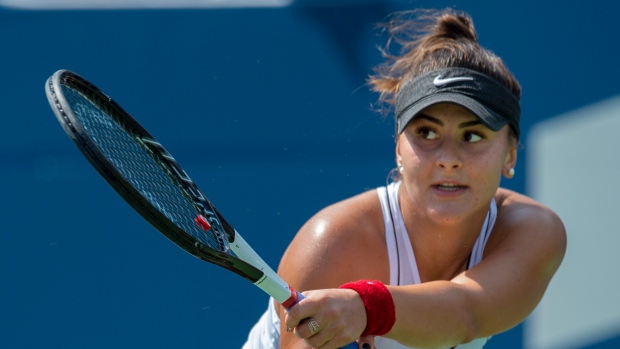 ALBANY, NY – Even in an exhibition match with a sore knee, Bianca Andreescu refuses to lose.

The players enjoyed the rare opportunity to experience a team environment with lots of laughing during the changeovers. But Andreescu was all business once she took the court in the anchor match catching her veteran opponent off guard.

"The las​t one was a little way too competitive," said Azarenka, who was playing Andreescu for the first time. "I thought we would be having a little bit more fun."​

With no instant replay available, Andreescu expres​sed some frustration with the umpiring arguing a few suspect line calls.

"The ref maybe missed five calls today," Andreescu said. "At two I was like, 'OK,' but five, I mean, that's too much. But at least he corrected himself twice, I think, towards the end so I was happy with that. I think I put some pressure on him."

What did Azarenka think?

For the record, Andreescu turned 19 in June.

After one point, Azarenka seemed to acknowledge a missed call and tried to give a point to Andreescu's team.

"She saw the ball was out too and I'm like, 'You'll need it,' so," Andreescu said breaking into a smile, "a little trash talking never hurt anybody. It makes it more fun."

The team that won the most overall games would get the first point of the inaugural Aurora Games, a showcase for women's sports, which runs through Saturday with events in gymnastics, hockey, figure skating, beach volleyball and basketball. ​

Team World led 19-17 heading into the final match at Albany's Times Union Center meaning Andreescu needed to win by at least three games. And it didn’t look good early as she was broken in her first two service games. But then, as she's done time and time again during this magical breakthrough season, Andreescu found another gear.

"I had most of the pressure," she said, "but I actually enjoy that, because I think I play better when there's a little bit more pressure on me so I was actually happy I played last."

"She's obviously on a roll now," said Azarenka. "She's playing great. She's had a lot of success in the last couple weeks and playing like, it feels, no pressure so it looks really good. Her game is very interesting."

Andreescu's left knee was taped up, but it didn’t seem to slow her down all that much.

"It was a little bit achy, but I'm taking care of that," she said. "I have a full-time physio with me now so I'm getting as much treatment as I can."

With the season's final major just days away, Andreescu seemed determined to keep her momentum going.

"I mean, it's all fun and games but, at the same time, you want to get that point for your team so I'm glad I did," she said. "I'm feeling really pumped for the US Open. I think I can do big things there … With my win in Toronto it’s giving me a lot of confidence going into the US Open."

Andreescu has won 17 straight completed WTA singles matches dating back to her title run at Indian Wells in March. The only blemishes during that stretch came when she was forced to retire from a match at the Miami Open with a right shoulder injury and then withdrew from the French Open after re-injuring the same shoulder in her first round win at Roland Garros.

Opponents have struggled to find a strategy to beat Andreescu, who pairs a fierce determination with a versatile game.

"She has so much variation," observed Bencic. "I practised with her in Toronto and we had a really high-quality practice so I definitely think she's the future of the game."

"She's playing great tennis," said Kenin, who has faced Andreescu three times this year, including in the semi-finals in Toronto. "She's got a lot of different variety. She's very competitive, has the big forehand, serve, I mean, everything in her game is so challenging, which makes it hard to play her."

Kenin and Andreescu teamed up in doubles at the Aurora Games losing 6-2 against Muguruza and Azarenka.

"I was happy to be on the same team as her," said Kenin, who handed Andreescu her last loss in a completed match in the semifinals in Acapulco. "We bonded more and became closer so it was really good. We made some inside jokes. We make the same jokes. We’re both easygoing. Before we didn't really know each other really well."

It feels like the tennis world is still getting to know Andreescu who, with the exception of one match at the French Open, was sidelined between April and August. Andreescu described her win in Toronto as "eye-opening" noting she had no expectations in returning from the lengthy injury layoff.

It's almost like she's still realizing how good she is.

And that may help her because, as Azarenka noted, she’s playing freely. The Mississauga, Ont. native seems loose and is going for her shots. And New York, which she calls her second-favourite city after Toronto, may be the perfect stage for Andreescu's next performance.

"I just love the city because there's always something to do there," she said. "I love the hype ... people can be a little bit crazy, but it’s cool. It’s really cool. I like it."