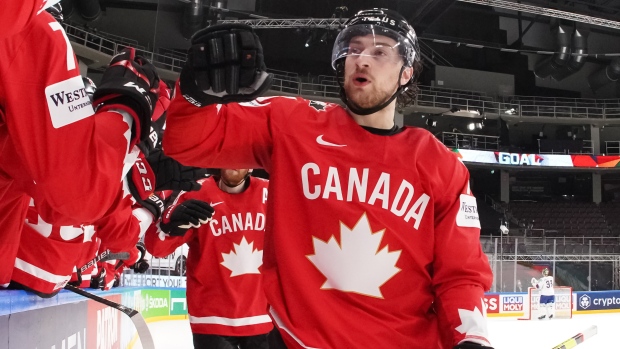 Mangiapane is among 50 players and six goaltenders on Canada's long list, which won't be made public.

Sidney Crosby, Connor McDavid, and Alex Pietrangelo were named to the team in October after the NHL and NHLPA requested three provisional NHL players be named by each country taking part.

“Obviously, my goal is to make the team,” Mangiapane said, per the Calgary Sun. “Maybe I’m a dark horse … There are some pretty good players and options they can go with there. But I’m just trying to go out every game and play my game and play hard, and, maybe a long shot, maybe I make the team."

A sixth-round pick of the Flames in 2015, Mangiapane represented Canada for the first time at the World Hockey Championship in May. He posted seven goals and 11 points en route being named tournament MVP as Canada won gold.

“It was an honour to get a call and just say, ‘Okay wow, they’re actually looking at me,'" Mangiapane added. "Because I was never selected to do anything with Team Canada. The world championship was my first time putting on the jersey. So, to be in consideration after going from no world juniors or any other invite or anything like that … It’s a real honour.”

TSN Hockey Insider Pierre LeBrun reported last month Canada was given an exemption to name six goaltenders to their long list due to uncertainty surrounding Carey Price's status. As a result, Darcy Kuemper, Carter Hart, Marc-Andre Fleury, Mackenzie Blackwood and Jordan Binnington were put on the list, in addition to Price.