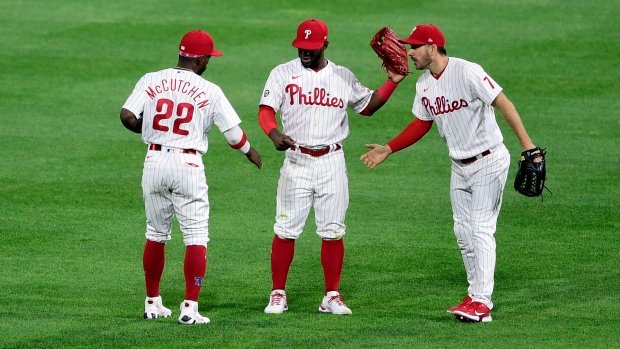 Nola (3-1) struck out 10 and allowed one run and five hits in six gritty innings as the Phillies held on to earn consecutive wins for the first time since they started the season 4-0.

“Having the results I had, it felt good,” said McCutchen, who entered the game batting .176. “Still more work to be done. I'll look at the positives and take those into the next game.”

Phillies reliever Enyel De Los Santos, called up from the minors earlier in the day, came out of the bullpen to pitch the seventh but was denied entry by umpires because he didn’t appear on their lineup card.

The Brewers took advantage, scoring four runs off David Hale and JoJo Romero. Hale lasted three batters, exiting after Luis Urías' RBI single. Jackie Bradley Jr. hit a two-run homer to centre off Romero to cut the deficit to 6-5. Center fielder Odubel Herrera got his foot stuck in the padding halfway up the wall and needed help from right fielder Miller to get untangled.

Sam Coonrod got five outs for his second save. He retired Bradley on a fly ball to left with runners on first and third to end it.

“Nola gave us a gutsy performance. We knew our bullpen was short and Coonrod did a tremendous job,” Girardi said.

McCutchen led off the bottom of the first with a drive into Philadelphia’s bullpen to tie it at 1. He connected to left-centre to ignite a five-run third that put the Phillies ahead 6-1. After a fielding error by third baseman Travis Shaw on J.T. Realmuto’s grounder with two outs kept the inning going, Didi Gregorius had an RBI single before Miller launched one into the second deck just inside the right-field foul pole.

Nola retired 12 in a row during one stretch before running into a bases-loaded jam in the sixth. He struck out Jacob Nottingham on his 114th and final pitch to end the threat.

“They got the big hit. We had chances,” Brewers manager Craig Counsell said. “I think we can be better than we’ve been (offensively). There’s definitely room for improvement. You feel a bunch of guys are gonna get going. I’m still confident in that.”

The Phillies have played six straight one-run games for the first time since 2000.

“Just finding a way,” Miller said. “I feel like every game has been like this. It was a good ending.”

Brewers: OF Christian Yelich went back on the injured list due to a lower back strain just one day after getting activated. The 2018 NL MVP was 2 for 4 on Monday night in his first game since April 11. The Brewers recalled outfielder Tyrone Taylor from Triple-A Nashville.

Phillies: RF Bryce Harper wasn’t in the lineup for the second straight game because of a sore left wrist. ... CF Roman Quinn needed nine stitches for a cut on his right index finger. He was hit on the hand while offering to bunt during an at-bat in the second inning. He stayed in, hit a single and then left the game after the inning.