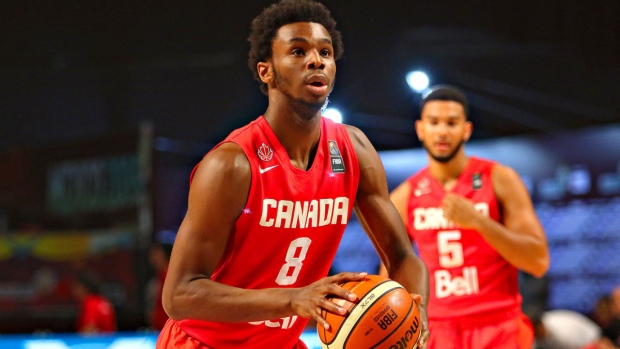 If Andrew Wiggins needs advice on what it means to be a Canadian Olympian, he doesn't have to go very far to find it.

After a six-year hiatus, Wiggins is back with Canada's national men's basketball team as it gears up for an Olympic qualifying tournament in Victoria.

Asked who influenced his decision to return to the national team fold, Wiggins credited his mother, two-time Olympian Marita Payne-Wiggins.

Payne-Wiggins represented Canada at two Olympics and was part of the country's silver-medallist 4x100-metre and 4x400-metre relay teams at the 1984 Los Angeles Games.

"She told me it would be a good experience," Wiggins said in a video conference Wednesday from Tampa, Fla., where the Canadian team is currently based. "I talked to her about it a couple of times and decided it would be the right move for me this summer."

Wiggins, the No. 1 selection by Cleveland at the 2014 NBA draft, is a major piece of a large and successful Canadian contingent in the NBA. The 26-year-old Golden State Warriors forward has averaged 19.5 points, 4.4 rebounds and 2.3 assists per game over his seven-season career.

However, he has not been part of the national team since the 2015 FIBA Americas Championship in Mexico City. A favourite to qualify out of the event for the 2016 Rio Olympics, Canada instead was relegated to a last-ditch qualifying tournament in Manila, Philippines, after a 79-78 semifinal loss to Venezuela.

Wiggins did not join the Canadians in Manila, where they lost 83-74 to France in the final with an Olympic berth on the line.

Much like in Manila, there's only one Olympic berth up for grabs at the Victoria tournament, which tips off next Tuesday.

While Canada will field a team with considerable NBA talent —veteran guard Cory Joseph (Detroit), young star R.J. Barrett and big man Dwight Powell are among the others on the roster — it will also be missing key pieces due to injury, pending free agency or personal reasons.

Having a motivated Wiggins back in the fold should help to plug the gaps.

"Certainly great to have him here," Canada head coach Nick Nurse said. "He looks good. He's certainly prepared himself for this because he's in shape and in form."

"He probably gives you a guy who can bounce up off the floor and get a shot off when things may be a little murky," Nurse said. "I think it's always valuable to have these guys who can get you out of some jams on offence."

Canada opens Group A action Tuesday versus Greece, which will be missing Giannis Antetokounmpo. The two-time NBA MVP will be playing in the Eastern Conference semifinals with the Milwaukee Bucks.

The Canadians finish Group A play against China on June 30. Group B has Uruguay, Czech Republic and Turkey. The top two teams in each group move on to the semifinals.

This report by The Canadian Press was first published June 23, 2021.