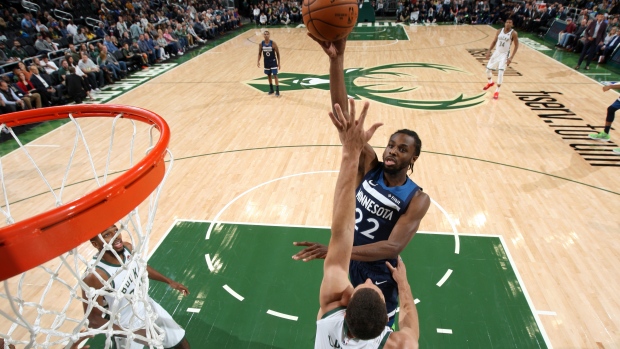 Just as everybody expected when Andrew Wiggins was drafted with the first-overall pick out of Kansas five years ago and traded to the Minnesota Timberwolves, a young Ontario-born player is helping to lead his Western Conference team to relevance and on the road to becoming a true NBA title contender.

Of course, that team isn’t the T-Wolves, and that Ontario-born player isn’t Wiggins. The team is the Denver Nuggets and the player is Kitchener, Ont.’s Jamal Murray, who was drafted two years later. As the Nuggets and Murray hope to compete for a conference crown this season, the Timberwolves enter the year very much an unknown commodity yet again with a ton of high-end talent, but no guarantees the team will be able to harness it into something tangible in a conference filled with strong teams and virtually no margin for error.

Only two years ago, the T-Wolves signed Wiggins to a maximum five-year deal worth $147.7 million, coming off a season in which the Vaughan, Ont. native averaged a career-high 23.6 points a game and shot .356 from three. While it undoubtedly carried risk, the commitment was given to a player that then-head coach and team president Tom Thibodeau saw as a franchise cornerstone alongside Karl-Anthony Towns, one of the league’s best young bigs, and the recently acquired Jimmy Butler in what Minnesota belived to be a Big 3 that could rival the Golden State Warriors’ dominance in the West.

Just 24 months later, Thibodeau has been fired, a malcontented Butler was traded and the Timberwolves have a single playoff win to show for what should have been an era with the most promise since a Kevin Garnett-led team reached the Western Conference Finals in 2004.

So just what the hell happened here?

Well, it starts with Wiggins. From both a gameplay standpoint and personal chemistry, Wiggins and Butler never clicked. It was to be expected that Wiggins would cede shot attempts to Butler and he did, going from 19.1 a game in 2016-17 to 15.9 in 2017-18. The bounceback last season wasn’t at the expected level when his FGA rose only to 16.6 a night even with Butler out of the picture for most of the year, but the more galling issue has become Wiggins’ efficiency or lack thereof.

Among qualified players last season, Wiggins’ Player Efficiency Rating (PER) was 217th in the NBA at 12.42. Considering that a replacement-level player’s PER is 15.0, Wiggins is getting max money and playing at level below league average. Just below Wiggins last season at 12.41 was former Toronto Raptors project and now Memphis Grizzlies forward Bruno Caboclo. Among small forwards, the next-worst mark from a player on a max deal was Gordon Hayward of the Boston Celtics, coming off of a horrific leg break, at 15.62.

Looking at win shares, the picture is even bleaker for Wiggins. On the 36-win T-Wolves last season, Towns led the team with 10.4. Wiggins came in at 0.6, 345th in the NBA. Dwight Howard also posted 0.6 last season, but he appeared in nine games. Things aren’t any rosier defensively for Wiggins with his real defensive plus-minus at -1.55, the fourth-worst mark among small forwards in the NBA last season.

Just as Wiggins fell last season, so did the team. A season after their first playoff appearance in 14 years, the Wolves were once again on the outside looking in last April. The team finished dead last in the Northwest for the fourth time in five years and eighth time over the past decade, missing out on the playoffs by 13 games.

“It’s always tough not to be in the playoffs,” Towns told Marc Spears earlier this month. “I live for the playoffs. I have won a lot in my life. And I have expected nothing less in the NBA since day one in training camp as a rookie. … I had a great time in the playoffs, and I learned a lot more things that people don’t get to learn. I learned how to do things to benefit the team as best as possible.”

Now, Wiggins believes he’s done the same after an intense offseason workout regimen and he insists that the best is still yet to come – that his plateauing numbers are a blip and not a trend, something that he will have a chance to prove. With former Houston Rockets executive Gersson Rosas in charge of the front office and Ryan Saunders’ interim label – the son of the late Flip Saunders was elevated from head assistant upon the firing of Thibodeau in January – lifted as head coach, there is the feeling of a tabula rasa in Minneapolis this season where Wiggins will be able to change the narrative around his stagnant career.

“You learn from it,” Wiggins said of last season at team media day in late September, “and it’s nothing but motivation. You go into the summer knowing that you’ve gotta work and people are going to doubt you. People are going to think you lost a step; that you lost all of these things, but all you can focus on is yourself and the fact that I can prove people wrong and get back out there and let people know that I’m still the same player. That’s motivation. It means a lot – it makes me work harder. I want to be great.”

The Timberwolves will settle for good. In Towns, the team has a burgeoning actual, honest-to-goodness superstar who can be mentioned in the same breath as Giannis Antetokounmpo, Anthony Davis and Joel Embiid. The T-Wolves thought they were drafting the second coming of Garnett in Towns and, thus far, he’s mostly lived up to the hype, posting 24.4/12.4 a year ago, both career bests. The potential for Towns to emerge as a top-five player in the NBA is a very real one.

“We can be as good as we want to be, as long as we stay cohesive, we stay unified and continue to play the game we play on a nightly basis,” Towns told Spears. “… It’s easy to win one game. It’s hard to win most of the games in an 82-game season. Obviously, if we are blessed with health and play basketball the way we know we can play basketball, we will be just fine.”

But fine won’t be good enough in a stacked West. On top of more from Wiggins, they’ll need a healthy Jeff Teague, who was limited to only 42 games last season with an ankle injury. When he did play, the team was 23-19 and Teague averaged a career-high 8.2 assists. For the Minnesota offence to click, the team will need Teague as its quarterback.

The team would also like to see a jump in contribution from Josh Okogie in this second year in the league. The 20th overall selection in 2018, Okogie was a revelation for Nigeria during the FIBA World Cup, leading the team in scoring and looking considerably sharper from beyond the arc than he did in his rookie campaign. His jumper needs work, but he’s emerged as a competent wing defender.

Speaking of defending, Robert Covington appeared in only 22 contests for the team last year after coming over from the Philadelphia 76ers as part of the Butler trade, so what he’s capable of offering on the defensive side has yet to truly be seen in the Twin Cities. But a healthy Covington is the best overall defender on the team and capable of going up against virtually any position on the court. With a career three-point shooting percentage of .360, Covington is also one of the few deep-ball threats on the team.

Still, the reality remains it will take nothing short of excellence from the T-Wolves to gain a foothold in a top-heavy conference that features the Warriors, Rockets, Nuggets, Los Angeles Lakers, Los Angeles Clippers and Utah Jazz, all of whom harbour realistic title aspirations. The Wolves will need to not only be very good, but also fortunate to reach the postseason for just the second time in over a decade and a half. And what if they come short yet again?

If the T-Wolves could find a trade for Wiggins today, they would try to make it happen. For all of his talk of improvement and the intense training he underwent this summer, the chances of the team having already seen the best of the former Jayhawk are very real, making his contract all the more onerous. Should there be a potential exit ramp, it would be something that Minnesota’s management team would be foolish not to explore.

There is, of course, something considerably less palatable that the team might be forced to also consider, perhaps not today or tomorrow, but not far down the road.

In 2007, Garnett wanted a chance to win and was eventually dealt to the Boston Celtics. The trade to acquire Wiggins in 2014 from the Cleveland Cavaliers was one consummated when Kevin Love – the last man earmarked to take over Garnett’s mantle – also sought greener pastures. Historically for the Timberwolves, a dearth of winning has soured its franchise player on staying with the team for the long run. So it would be folly to not consider the possibility that at some point, the same will happen with Towns.

To be clear, there is no hint right now of Towns being unhappy and he is only entering the first season of a five-year, $190 million max deal signed last year. But losing weighs on a player – we’ve seen that in the past and we’ll see it again in the future. While the team in this current construction is by no means in win-now mode, the impetus for big strides forward for the T-Wolves is evident and just because you can’t hear it loudly right now doesn’t mean that a clock isn’t ticking when it comes to Towns’s long-term future.

Though expectations for the Wolves are modest in comparison to their rivals in the Western Conference, the stakes for Wiggins, Towns and the rest of the team are just as high. The future might not be now for the Timberwolves, but there needs to be a way to get there sooner than later.