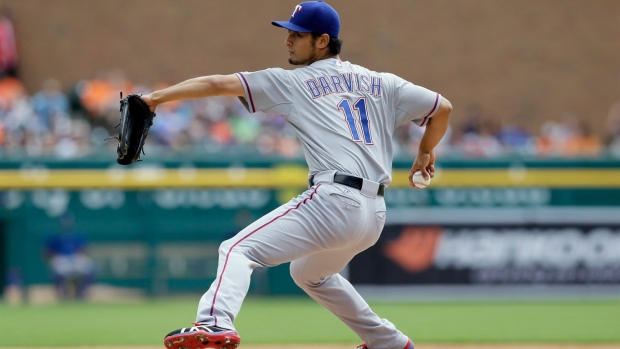 (SportsNetwork.com) - The Texas Rangers will try to wrap up a three-game series out west with a win on Sunday as they send ace Yu Darvish to the mound to take on the Los Angeles Angels of Anaheim.

The Rangers are looking to avoid a sweep, having dropped their previous two games in Anaheim. The Angels will send Matt Shoemaker out to the mound for the start.

Darvish will hit the mound in search of his eighth win on the season. He sits on a 7-3 record with a 2.39 earned run average and 109 strikeouts in 13 starts on the year.

He was roughed up in his last outing against the Athletics, who tagged Darvish for eight hits and seven runs - four earned - on Tuesday. Darvish lasted just five innings but still managed to strike out eight batters, though he did walk five. It was his first loss since May 16.

"I didn't have command of any of my pitches," Darvish said following the loss. "It's not how they approach me. I just didn't have all of my stuff today."

Shoemaker, meanwhile, has seen action in both relief and as a starter this season, and is coming off one of his better performances of the year on Tuesday, in which he pitched eight innings of two-run ball and struck out a season-high 10 batters in a Los Angeles win over Cleveland.

He takes the mound Sunday with a 4-1 record and a 3.83 ERA and has walked just nine batters. He's seen action in 11 games on the year, of which six have been starts.

This will be the first time in his career he's faced the Rangers. Shoemaker's only loss this season came back on April 12 against the Mets.

The contest Saturday marked the third American League matchup that day to head to extra innings. The AL West foes needed 10 innings to seal the deal, with the Angels notching a 3-2 triumph.

Howie Kendrick singled to center field in the bottom of the 10th, allowing Josh Hamilton to score the winning run as the Angels walked off with the victory. It was Kendrick's first and only hit of the ballgame.

Angels starter Jered Weaver made it through eight innings on the mound, but didn't secure the win, which was awarded to Mike Morin. Weaver gave up four hits and one earned run in the contest.

C.J. Cron belted a home run for the Angels, and Hank Conger was the only player in the entire game to notched more than one hit (with two).

Texas entered the series having won 16 of its past 20 against the Angels, but will look to avoid getting swept Sunday.